Membranes to Molecular Machines:
A Mechanical Vision of Life 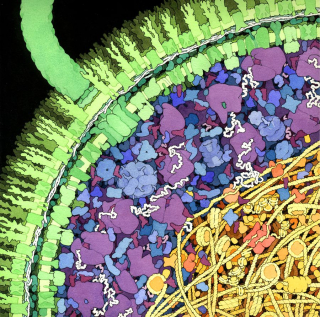 A prevalent metaphor for a human is a machine: the brain is the computer, the heart is an engine, the joints are axles. It's a convenient metaphor. Machines respond to the addition of external substances such as fuel and oil. Likewise, human bodies respond to the addition of nutrients, vitamins or drugs. Moreover, just as a complex machine is composed of fundamental pieces such as pul­leys, levers, wheels and axles, all living organisms are com­posed of the equivalent in the form of molecules at work. Mathias Grote's Membranes to Molecular Ma­chines probes the molecules that make us and other life on Earth ­ and in the same vein, inquiries into who we are – by looking at those conglomerates of little machines. This induced a bit of an out-of-body experience for me!

Grote delves into our molecular machines with a focus on membranes and their components, especially pumps. He gives structural biology time in the limelight – a break from the genetics and genomics frenzy of the modern era – and traces the history behind how the view of membranes evolved as electronic technologies gained traction among scientists. Packed with history and sprinkled with philosophical commentary, an occasional pun or two, and a smattering of German words, Membranes to Molecular Machines makes for a good read, informative and thought-pro­voking. 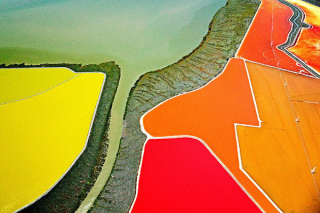 The book begins by following the storyline of bacterio­rhodopsin, covering its rise from complete unknown to its discovery in the humble Halobacterium halobium to its ultimate christening as a "pump" and "electrical ge­nerator." Our current detailed understanding of the purple light-activated protein represents a success story of multinational scientific collaboration, trial and error, and strokes of luck. The results arose from piecing to­gether techniques and ways of thinking from structural biology, molecular genetics, chemistry, and physics – a chimera of the sciences that, prior to the mem­brane sciences boom in the 1970s, had been disjointed in their attempts to study membranes. Just as a physical mem­brane encases and makes possible diverse cellular forms, the "membraneland" studies brought together, umbrellalike, diverse sciences. And, since this is STC, where soft spots for microbes abound, the credit given to Halobacterium halobium is much appreciated. This salt-loving archeon's (despite its name, kept for historical reasons, this microbe is an archeon) tough membrane made it possible for the pump to be isolated from the membrane and to be thoroughly studied. 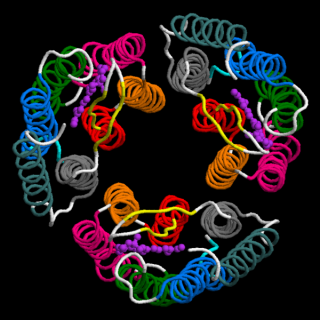 Figure 3. Bacteriorhodopsin, a trimer with each monomer having seven trans­mem­brane alpha helices. Source

In the next chapter, Grote posits that "life has become mechanical" because it can be taken apart and then put back together repeatedly, at both the levels of cells and molecules. Bacteriorhodopsin remains a key player. We first look at "do it yourself" cell membranes: take lipids from egg yolks or soybeans and let them self-assemble into liposomes in some polar solvent. Then, we follow the duo of Stoeckenius and Racker, who in the 1970s dis­covered that ATP could be generated just by shining light on membrane vesicles that included bacteriorhodopsin and an ATP synthase. This is a fascinating concept, ATP was being generated from an in vitro system constructed from deconstructed chicken eggs, soybean plants, Halo­bacteria, and beef heart — a "cell simulacrum," as Grote calls it. A Franken-cell, over a century and a half after Frankenstein’s monster came to life in another book.

Grote then covers the rise of recombinant DNA technology and biotech during the 1970s and 1980s to argue that the increasing frequency of chemical syntheses of biomolecules reflects a shift from "products of nature" to "products of the chemical laboratory." This time period saw the pro­gression from the synthesis of simple DNA molecules to the laborious synthesis of a whole gene (by organic chemist-molecular biologist H. G. Khorana), from simple peptides to functional en­zymes like ribonuclease A (by chemist R. B. Merrifield), all within the confines of a test tube. Since then, the process of constructing genes and proteins has been further optimized, much like an as­sembly line for the molecules of life, transforming the inner workings of cells into products or­dered online at the click of a mouse.

This time period, dubbed the "The Biochip Revolution" (the term was coined by the science writer Kathleen McAuliffe in 1981), saw the rise of biomolecular nanotech and an entirely new molecular machinery lexicon, with collagen as "cables," membrane proteins as "pumps," and ribosomes as "tools of the cell." One of Grote's points that I found intriguing here was the idea that these biolo­gical machines, built of protein and membrane, could evolve and change in ways that scientists cannot control, perhaps with unwanted consequences. I think this is an interesting ramification. In recent years, the entirety of War and Peace and then a GIF of a galloping horse were stored in DNA inside of live E. coli. The scientists were able to reconstruct the horse's running with reason­able accuracy. But I wonder, is the fidelity of an E. coli hard drive any good long-term if the DNA is as prone to mutation as other storage media? As Ian Malcolm might say, "Life finds a way."

(Click on figure to see the animation ) Figure 4. To the left are a series of frames from E. Muy­brid­ge's Human and Animal Locomotion. To the right are the frames after multiple generations of bacterial growth, recovered by sequencing bacterial genomes. Image credit: Seth Shipman. Source

All of this conversation on molecular machines draws at­tention to the dichotomy (or rather, lack of it!) between life and robotics. As humankind's ability to create robots that resemble existing life grows, whether it's mimicking hummingbird flight or crossing into the uncanny valley with Saudi Arabian citizen-robot Sophia, it’s fascinating to me that this book spins that trend on its end and looks at existing life as its mechanical components. One ultimate goal of synthetic biology, as Grote discusses, is "the crea­tion of novel forms of life, pieced together from modular components." Designer organisms manufactured in the lab from scratch, beyond J. Craig Venter’s synthetic My­co­plasma bacteria, lie on the horizon. (Going off on a little tangent, this has some interesting impli­ca­tions in science fiction such as Isaac Asimov’s Three Laws of Robotics, and Humans, one of my fa­vorite TV shows, which follows the story of extremely advanced synthetic humanoids coming to terms with their consciousness and then struggling to gain recognition from the bona fide humans).

The body-as-a-machine metaphor actually harks back to Descartes, who wrote that the bodies of both humans and animals are machines (made by God, he believed). But with all of the new deve­lopments that occurred in the 400 years since Descartes put his pen to paper, this metaphor is all the more immediate – and Grote's book is a fascinating look into this shifting world.

Grote, Mathias. 2019. Membranes to Molecular Machines: Active Matter and the Remaking of Life. The University of Chicago Press.