When I started out in microbiology some 70 years ago, bacteria were just little balls or sausage-shaped rods, and, if you were of a fancy mindset, corkscrew-like structures. Some were endowed with flagella or capsules, but not much else. Their surface area was limited to what you could see under an optical microscope. Soon, our view expanded to include other accessory structures, such as pili, nanowires, phage-like gene transfer agents, and, notably, extracellular membrane vesicles. These latter structures, generally known as Outer Membrane Vesicles (OMVs) for their earlier dis­covery in the Gram-negatives, play  a role in the transfer of genetic material and pathogenicity factors, as well as in the processing of metabolites. OMVs participate in communication between nearby members of the same species, other microbes, and their hosts. Generally speaking, OMVs are small, ∼50–250 nm in diameter. 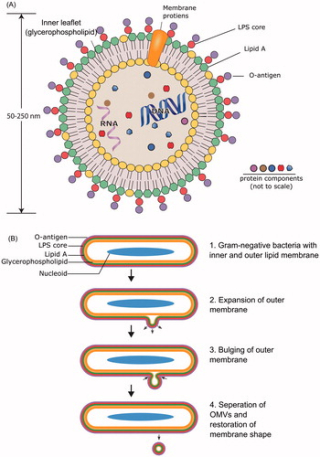 Figure 1. OMV structure (A) and production (B) from gram-negative bacteria. The com­position of the lipid bilayer of OMVs retains the asym­metry observed in bac­terial OM, with complex lipids (LPS, made up of lipid A, LPS core, and O-antigen)) in outermost layer mounted on a uniform phospholipid inner layer. OMVs host a large repertoire of cargoes such as nucleic ac­ids, enzymes, toxins, fragments of pep­tidogly­cans, and fluid from the periplasmic space. (B) Formation of OMV starts with the bulging of the outer mem­brane at very small region followed by progress in the expansion of the mem­brane. The in­creased expansion is established with the spherical structure of blebs. Eventually vesicle pinches off at the joint neck and gets separated from the cell. Source. Fron­tispiece: Bacteroides thetaiotaomicron pro­duces outer membrane vesicles (OMVs). Source. Frontispiece: electron micro­graphs of Flavobacterium strain Hel3_A1 _48 cells in stationary growth phase. Membrane tubes (t) and thicker vesicles (O-IMVs) are indi­ca­ted. B Cells were negatively stained with 1% uranyl ace­tate for TEM . E Cells were passively set­tled on a silica wafer, dehydrated by an Et­OH-series and preserved using critical point drying for SEM. Bar corresponds to 500 nm. Source

They are made by many Gram-negative as well as by Gram-positive bacteria (for a review see here). Nowa­days, extracellular vesicles occupy center stage in many studies of bacterial physiology, genetics, pathogenesis, and ecology. Given their interesting cargoes, it has not escaped the attention of investigators that OMVs may serve as acellular vaccines.

For all the interest they have elicited, the process of their formation is not fully understood.  In the Gram negatives, it is though that it starts with bulging of the outer mem­brane, expansion of the contents, followed by pinching of the OMVs, a form of exocytosis that entraps some of the periplasmic material. A number of disparate mechanisms appear to set off OMV formation, but they generally in­volve inducing stress, to wit, osmotic shock, dehydration, antibiotic action, and the accumulation of misfolded proteins or peptidoglycan fragments.

In at least one case, that of a marine member of the Fla­vobacteria called Formosa sp., the process results in a chain of vesicles, what the authors call "biopearling." This starts with the extrusion of little tubes in the exponential phase of growth, which later, in the stationary phase, di­vide into chains of up to 100 connected vesicles up to 10 μm long.

The authors further say: 'The flavobacterium is abundant during spring bacterioplankton blooms developing after algal blooms and has a special set of enzymes for lamina­rin, the major storage polysaccharide of microalgae. We demonstrated with fluorescently labeled laminarin that the vesicle chains bind laminarin or contain laminarin-de­rived compounds. Proteomic analyses revealed surface-attached degradative enzymes on the outer membrane vesicles. We conclude that the large surface area and the lumen of vesicle chains may contribute to the ecological success of this marine bacterium.' Certainly, bacteria make use of a variety of in­genious communication stra­tegies to ensure such success.