Close your eyes for a moment and imagine yourself in front of a plate full of freshly picked, bright red, fragrant, ripe, and sweet strawberries. For most of us, that should be a truly mouth-watering experience. If you do enjoy strawberries, you partake in a widespread pleasure that goes back millennia through the eating of wild strawberry species in both the Old and the New Worlds. Few fruits have as much worldwide appeal. And if you like yours with cream, well, you're going back to a tradition said to have started in the early 16th century in the court of Henry VIII of England. But that luscious, juicy fruit that most of us consume today is a hybrid of two New World species. It resulted from a cross between Fragaria virginiana (from eastern North America) and Fragaria chiloensis (from Chile), that was first bred in Brittany in the 1750s and whose cultivation quickly spread all over the world. So, go ahead and enjoy your strawberries. But not without a little bit of guilt… 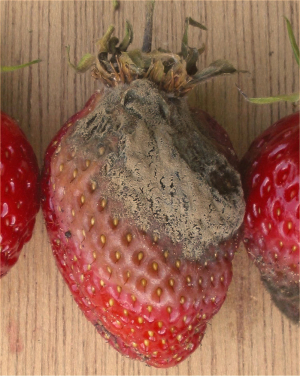 These days, any time we humans like something as much as strawberries, there is usually an ecological price to pay. In order to grow the close to ten million tons(!) of straw­berries consumed every year, we must resort to intensive agricultural methods that involve high density plantings that greatly facilitate the transmission of dis­ease agents. To fight back, we of course apply ever-grow­ing amounts of diverse pesticides. And, sadly, strawberry cultivation is one where the residual pesticides reach high levels. The influential, if controversial, Environmen­tal Working Group (EGW) produces a list of foods with the highest pesticide residue, the so-called "Dirty Dozen." Year after year the beloved strawberries top that list. But don't worry too much, the pesticide levels reported by the EGW are almost always orders of magnitude below those considered detrimental to health by the standards set by the US Food and Drug Administration (FDA). 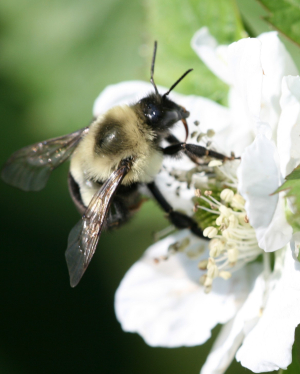 Which are these pests that would inflict damage on straw­berries if uncontrolled? There are many, but a rather important one is an airborne fungus that attacks the fruit directly. It's a fungus we have discussed in STC before: Botrytis cinerea, the causative agent of 'gray mold' that afflicts numerous crops leading to billions of dollars of losses every year. Paradoxically, some of us know B. cinerea as the 'noble rot' because it partially dries grapes on their clusters, giving rise to highly sought after-dessert wines such as Sauternes. But for the grow­ers of strawberries, there is nothing noble about gray mold. It is an undesirable pest that must be dealt with before it causes catastrophic losses. A currently go-to solution is the direct application of fungicides. However, that need not be the case forever. A recent paper points to a possible alternative. Mind you, that is not the stated aim of the authors of the paper. It is the story of a beau­tiful tripartite mutualistic symbiosis involving strawber­ries, a pollinator bumblebee (Bombus impatiens), and an actinomycete.

This newly found symbiosis expands the repertoire of fascinating plant-microbe and insect-micro­be interactions. It involves a bacterium that apparently confers a selective advantage to both the plant and an insect by suppressing different pathogens of each. Microbes are known to expand the physiological capacity of a plant host and deliver beneficial functions such as growth hormone production, nitrogen fixation, nutrient acquisition, and resistance to environmental stress. Such relationships are even recognized as evolutionary units because the resulting capabilities often exceed those of either partner alone. The study by Kim et al. builds on previous work that identi­fied a Streptomyces strain from the rhizosphere – the soil in the vicinity of plant roots – that pro­tects strawberries against the pathogenic fungus Fusarium oxysporum f. sp. fragariae. In the pre­sent work, they identify a plant-associated Streptomyces, nearly identical to the one they isolated previously, that provides protection against B. cinerea, the fungal pathogen that is ubiquitous in greenhouse-grown strawberries. 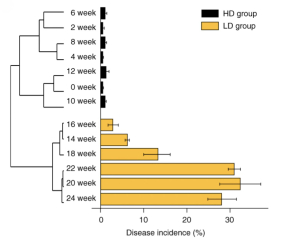 Using 16S rRNA gene analysis, the authors profiled mi­cro­bial communities in pollen and flowers samples taken from strawberries. They noticed relatively simple com­mu­nities that became even less diverse over time. In ad­dition, the incidence of gray mold disease increased over time and was inversely correlated with the presence of the Streptomyces. Isolates obtained from flow­ers and pollen were therefore screened for antifungal activity. The authors found two Streptomyces strains, classified as Streptomyces globisporus, with strong antifungal activity against B. cinerea. These strains, SP6C4 and SF7B6, were also capable of colonizing flowers. More surprising was the fact that despite being isolated from pollen and flowers, respectively, these two strains shared >99% Average Nucleotide Identity (ANI) and were also nearly identical to the previously identified strain from the rhizosphere. S. globisporus SP6C4 is capable of moving in planta from either roots or surface flower structures to vascular bundle tissues of the stem. The movement within plant tissues was detected using both a strain-specific marker gene lanM and bacteria labeled with mCherry. This Streptomyces strain can also colonize the gut of the bees, which in turn can transport the bacteria from plant to plant. This was determined by inoculating flower surfaces with hygromycin resist­an­ce-marked strains that were traced to uninfected plants and the bees' guts.

Figure 4. Antagonism in vitro against gray mold pathogen. Mycelium growth in­hib­ition of B. ci­ne­rea by strain SP6C4 and SF7B6 on PDK agar. Two strains were streaked on PDK agar with toothpicks. After 3 days, the pathogen agar block (0.7 mm) was placed at the center of the plate, then the plate was incubated for 7 days at 28°C. Source

Perhaps the most relevant aspect of the work is the capa­city of the S. globisporus strains to suppress disease. Not only does S. globisporus SP6C4 show antagonism in vitro against B. cinerea, it also reduces the incidence of the dis­ease when sprayed on strawberry plants in a green­house. At week 10 of the trial, 31% of the control flowers were infected versus only 12% of the SP6C4-sprayed plants. Consistent with the capacity of bees to spread the Streptomyces bacterium among plants, SP6C4 carried by bees also reduced disease incidence, 42% versus 12% in­cidence in control and SP6C4 treatments, respectively. Even more surprising is the fact that this same Strepto­my­­ces strain is capable of protecting the pollinator bees against the entomopathogenic bacteria Paenibacillus larvae and Serratia marcescens. Thus, this plant-associated microorganism moves within the plant, is transported by bees to other plants and protects both the plants and the bees against pathogens.

The findings in this study are reminiscent of other multipartite relationships in nature. One of the best studied systems is that of the leaf-cutting ants and their fungal garden (see here for an STC post on that symbiosis). These ants carry Actinobacteria that help protect the ant fungal garden from infection by a pathogenic fungus. The work by Kim et al. shows interactions among plants, insects and bacteria that benefit the three members of this system. The authors suggest that the Streptomyces strain, which protects both the plant and the insect pollinator from pathogens, trans­forms environments generally considered as separate into a mutualistic continuum. These interconnected relationships exemplify Commoner’s first law of ecology: "everything is connected to everything else." Recognizing the interdependence of organisms in ecosystems and the funda­mental roles played by each member is a first step towards adopting a much-needed ecological perspective to address the long-term protection of the environment and sustainability of life on our planet. If we are to have strawberry fields forever…