Will the real phage lambda please stand up?

(on its SIDE tail fibers!)

Phage infection of a bacterial cell typically begins when the phage’s tail fibers bind a receptor on the host cell, allowing for the ejection of genetic material. At this point, either the lytic or lysogenic cycle begins. The lytic cycle ends with a burst of phage progeny particles, known as virions, while the lysogenic cycle results in integration of the phage genome into that of the host or its maintenance as a plasmid. This "prophage" lies dormant until lysis is eventually induced. 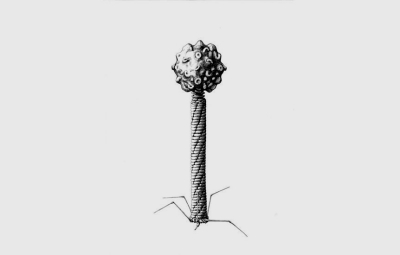 Figure 1.  An image of phage λ from Merry Youle’s Think­ing Like a Phage. The long tail fiber points down­ward, while the side tail fibers branch off to the sides. Source

The most well-studied phage is phage lambda (λ), which STC blogger emerita Merry Youle nicknamed "Temperance" in her book, Thinking Like a Phage because, as a temperate phage, it "chooses" whether to initiate lysis or enter the lysogenic cycle based on current conditions. Phage λ infects an equally well-studied host, Escherichia coli, and has been used to study many cellular processes. For example, the study of lysis-lysogeny decision making in phage λ has aided cell fate determination research in other organisms.

Phage λ remains well researched to this day. A recent review by Shao et al. in the Journal of Biological Chemistry described advances in "high resolution" methods used to study lysis-lysogeny decision-making in λ, as well as some factors that influence the decision. Interest­ingly, this review makes an offhanded comment about the λ strain most commonly used in research studies: it has a mutation in a gene called stf that truncates its side tail fibers. In other words, it may not be the real phage λ!

Further research revealed that there are two major strains of λ. When the American microbiologist Esther Lederberg first isolated λ in 1951, her strain had four thin side tail fibers branching off of the tail tip. These side tail fibers have been found to bind to the OmpC receptor on the surface of E. coli, increasing adsorption. This strain, now known as Ur-λ is the "real" phage λ, the "real" wild type. 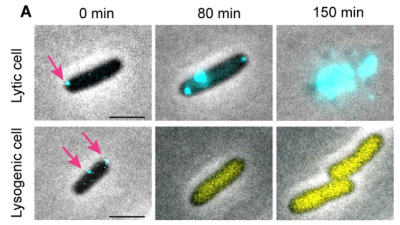 The strain of λ most commonly used in research studies is not that strain. Rather, it is a cross between two strains from labs in Paris and Pasadena, aptly nicknamed "λpapa." Due to the mutation in the stf gene mentioned above (a frameshift mutation caused by a cyto­sine codon deletion), λpapa lacks the side tail fibers. It has only a single short tail fiber at the tail tip with a "gpJ" protein that binds to the LamB receptor on the E. coli cell surface. λpapa, thought for many years to be the wild-type strain, is awkwardly still known as "λWT."

Although the mutation was discovered in 1992, the effects of Ur-λ's side tail fibers on the infection cycle were overlooked until very recently. That year, however, Guan et al. deter­mined if/how these phage components influence phage adsorption to the host, DNA ejection, infection failure, and the decision to enter lysis or lysogeny. Using fluorescent reporter systems – visualizing phages through tagging with fluorescent proteins – they examined infection at the single cell level.

First, the researchers studied the impact of Ur-λ’s side tail fibers on adsorption to the E. coli host. To do this, they developed "fluorescent reporter phages" for the λWT and Ur-λ strains. The mTurquoise2 gene (for fluorescence) was fused to the λD gene (which codes for capsid decoration protein) to identify phages that entered the lytic pathway. The mKO2 gene (also for fluorescence) was fused to the λcI gene (which codes for a repressor protein that inhibits lysis) to identify phages that entered the lysogenic pathway. These reporter phages were used in single cell infection experiments, in which the λWT and Ur-λ phages were mixed with E. coli and allowed to adsorb and eject their DNA. Subsequent imaging on agarose gel revealed that 84% of Ur-λ adsorbed, as opposed to 77.3% of λWT. In other words, the side tail fibers appeared to slightly increase the adsorption of Ur-λ phages. 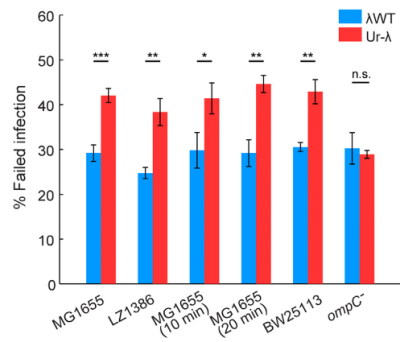 Figure 3.  Ur- λ has higher failed infection frequency than λWT  (first 5 columns) ex­cept when an OmpC- strain of E. coli is used (column on the right). Source

Next, the researchers sought to determine how Ur-λ's side tail fibers affect the frequency of infection failure (when neither lytic nor lysogenic pathway is established after a phage attaches). This can be due to either failed ejection (the DNA does not enter the cell) or failed estab­lishment (DNA enters, but the lytic or lysogenic pathway does not occur). The investi­gators hypothesized that Ur-λ would have a lower frequency of failed infections, as the side tail fibers would "stabilize adsorption" and/or "facilitate DNA ejection." However, surpri­singly, the opposite was true. Ur-λ failed infection 42.0% of the time, whereas λWT failed just 29.2% of the time. It appeared that the side tail fibers interfered, rather than supported, DNA ejection/infection.

Lastly, the researchers investigated the effects of side tail fibers on Ur-λ after infection, specifically whether they affect the phage's decision to enter the lytic or lysogenic pathway, or the time to lysis. It is known that the lysogenic response (decision to enter the lysogenic cycle) of λWT is affected by the number of phage infecting. This was tested for Ur-λ, which had a slightly higher lysogenization response at high average phage input (API) levels than λWT, likely due to greater adsorption to E. coli. Ur-λ was found to follow the same Poisson distribution as λWT, however, which simply means that the decision-making mechanism (in response to the number of infecting phages) is the same, and is not affected by the side tail fibers. Finally, the time to lysis was roughly the same for Ur-λ and λWT (112 minutes vs. 104 minutes), showing that side tail fibers do not play a role in this process.

To sum up, it is apparent that Ur-λ's side tail fibers binding to the OmpC receptor lead to increased adsorption to the E. coli cell envelope, but also to more frequent failed infections as they impede the DNA ejection process. Side tail fibers do not appear to affect lysis-lysogeny decision-making or time to lysis. In other words, the "real" phage λ (Ur-λ) is at a disadvantage compared to the "false" phage λ (λWT) when it comes to infecting E. coli. Or is it? This study looked at interactions at the single cell level. As the researchers point out, side tail fibers could give the "real" phage λ an advantage as they allow it to adsorb faster/more effectively to the E. coli envelope. Even if individual phages fail, Ur-λ infection as a whole could still be effective and efficient. As many readers know, the world of λ is not exactly simple.

The role of side tail fibers during the infection cycle of phage lambda – Jingwen Guan, David Ibarra, & Lanying Zeng (Virology, 2019) 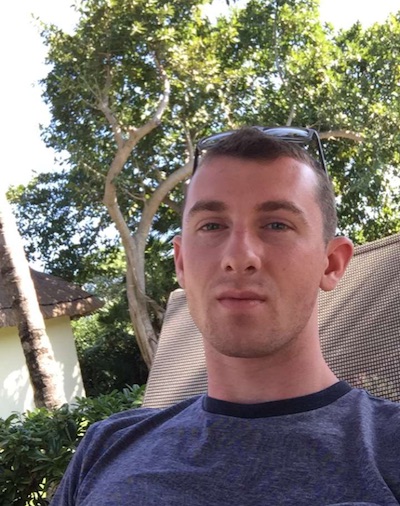 Nicholas Redmond graduated from Boston College in May 2019, where he studied biology, and is currently working as a medical scribe in Boston. He enjoys drawing, running, and watching soccer, and is interested in global public health and biotechnology