A sprinkle of acid a day keeps the law enforcement away

Imagine you look like someone dangerous, a criminal, an enemy. Despite being an exemplary citizen, you have to deal with the possibility that, at one point or another, you might get in trouble with law enforcement simply because you appear threatening. That's a struggle that many bacterial members of a plant's microbiome face. On the surface, these beneficial microbes look very much like infectious bacteria that can pose a threat to the survival of the plant; it can be surprisingly difficult to tell them apart. Yet, somehow, the "good" ones peacefully co-exist with their host organism while the "bad" ones are the chief target of its defense system; their presence triggers alarm bells and activates the plant's immune responses. Given their uncanny appearance, exactly how the beneficial microbes manage to avoid troubles from the plant's law enforcement has been a long-standing conundrum. Plants serve as a major habitat for diverse communities of soil bacteria. Many of these bacteria live in mutualistic relationships with their host plant. In exchange for plant-produced metabolites (which serve as nutritious food sources), these microbes contribute, directly or indirectly, to the plant's "wellbeing." Growth-promoting rhizobacteria are a classic example of such beneficial microbes. Over the course of millions of years, the mutualistic bacteria evolved numerous strategies that enabled peaceful, mutually beneficial relationships with plants. One such strategy involves interference with their host's immune responses that normally serve to eliminate any foreign microbe that the plants come in contact with.

And plants come in contact with a whole slew of foreign organisms. They live in a complex environment in which encounters with pathogenic microbes are a regular occurrence. To face these threats and avoid full-blown infections, they employ complex immune processes that kick in when an infectious organism is recognized. The recognition relies on immune receptors - molecular sensors that specialize in detecting, so-called, microbe-associated molecular patterns (MAMPs). Sensing of the MAMPs, flagellin being one example, allows plants to distinguish foreign organisms from themselves. MAMPs binding to the immune receptors signals danger and raises alarm bells, triggering a cascade of cellular and transcriptional responses with the ultimate goal of getting rid of the invader. Although these defense mechanisms are essential for plant survival, they come at a cost; resources that are normally spent on growth must be redirected towards fighting the invaders (Figure 2). Simply put, the plant either grows or fights infections, hardly both at the same time.

Given that the immune response can be detrimental to both the microorganisms that triggered it and the plant itself, it is usually undesirable for the commensals to activate them. And, indeed, despite their capacity for induction of the defense mechanisms - bacteria possess many molecules recognized by immune receptors – symbiotic bacteria somehow keep the plant defense system quiet. A new study from the group of Roeland Berendsen tackles just that question.

To detect activation of plants' immune responses, the researchers relied on genetically engineered strains of Arabidopsis – the workhorse of plant biology – that visibly change when transcriptional immune responses are triggered. Add a purified MAMP such as flagellin and the plants turn blue (Figure 3). 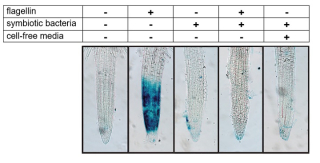 Figure 3. Effects of purified flagellin, sym­biotic bacteria and their cell-free cul­ture media on induction of immune res­ponse in Arabidopsis. Treatment with purified fla­gellin triggers immune res­ponse as evi­dent by Arabidopsis turning blue color. Symbiotic bacteria do not set off this res­ponse. Incubation of the plant with the sym­biotic microbes inhibits flagellin-induced ac­tivation of the immune system; the plant no longer turns blue. Similar in­hibition is achieved by treatment of the Arabidopsis with cell-free media collected from the culture of the symbiotic bacteria. Source

When tested using this system, strains of rhizobacteria did not induce the plant's color change; they failed to trigger the immune response despite carrying a plethora of MAMPs (including flagellin). Beyond that, addition of flagellin after the plant has been incubated with these beneficial microbes no longer caused activation of the defense mechanisms (Figure 3). This suggests that, rather than simply evading detection, the microbes actively suppress the immune responses.

How do these bacteria inhibit the immune responses of the plant? To begin tackling this question, the scientists asked whether the inhibition was dependent on direct interaction of the plant with the microbe or whether a secreted factor, a protein or a small molecule, was involved. A simple experiment brought an answer to that question. When, prior to the addition of flagellin, the plants were treated with cell-free media collected from roots colonized by the symbiotic bacteria, the MAMP failed to induce immune responses (Figure 3). It seemed no contact was necessary for the inhibition; rather, a secreted factor was likely involved.

To find out what was the factor mediating bacterial interference with plant's defense system, the authors set out to find isogenic mutants of the original rhizobacteria that lost the ability to inhibit plant immune responses. They used tricks of molecular biology, namely a transposon screen, to generate mutant derivatives of the symbiotic microbes. In the vast majority of the mutant bacteria containing transposon insertions in their chromosome, the ability to inhibit Arabidopsis immune responses was unchanged – these microbes retained their ability to make the plants insensitive to flagellin. However, a couple of the transposon insertion mutants were incapable of interfering with Arabidopsis' immune defenses; incubation with these strains did not prevent the plant from turning blue when exposed to immunogenic MAMPs. Media isolated from these microbes similarly lost its ability to inhibit the induction of Arabidopsis immunity (Figure 4). Bingo! These mutant bacteria would pave the way for finding the factor involved in suppression of the plant's immunity. 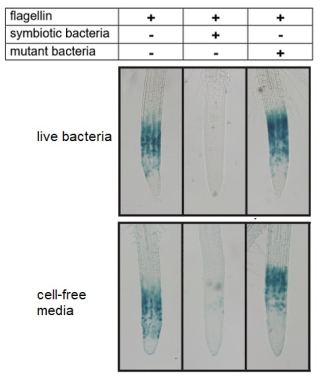 The authors identified the sites of the transposon insertions and were thus able to point to the specific genes disrupted in these bacteria. It turned out products of these genes were part of a metabolic process – oxidative fermentation of glucose (one of many ways the bacteria generate energy). The researchers wondered: Why would disrupting this specific metabolic pathway have such a dramatic effect on bacterial ability to influence the immune responses? In all other aspects, these microbes appeared healthy, so a general "lack of energy" was unlikely to be the cause.

Back to the drawing board the scientists went. What secreted factors are produced when bacteria ferment sugars? How could these bacterial products affect the immunity in plants? With those questions in mind, the likely candidate was not hard to come up with. This candidate was... acid.

Acids are a common byproduct of bacterial oxidative fermentation of sugars. Moreover, previous studies suggested that acidification of a plant's environment is a strategy used by certain microbes to dampen down plant immune responses. In light of these facts, what Berendsen and colleagues discovered made sense. It seemed that the mutants generated in the screen were incapable of suppressing Arabidopsis' immune responses due to their inability to generate acidic products of fermentation; they lost the capacity to acidify their environment.

Figure 5. Acid production plays a role in suppression of plant immune responses. (a) Symbiotic bacteria produce GA and 2-KGA – byproducts of oxidative ferment­ation of glucose – and acidify the en­vironment they inhabit. Mutant bac­terial strains produce less of GA and 2-KGA and are less effective at lowering of the pH of their surroundings. (b) Artificial lowering of pH of Arabidopsis surrounding (with acids: HCl and GA) is sufficient to inhibit immune responses to flagellin. Source

These were easily testable empirical claims. Compared to the media derived from the original symbiotic bacteria, those from the mutant strains contained significantly less acidic byproducts of oxidative fermentation. Similarly, the pH of the environment around Arabidopsis colonized with the defective strains was higher than that of the plants inhabited by the immune-suppressive microbes. Artificially lowering of the pH was sufficient to inhibit the plant's immune responses to flagellin (Figure 5).

The final piece of the puzzle was to establish how important is this ability to suppress a plant's immune response to symbiotic bacteria. The answer seems to be - quite important. When Berendsen and colleagues compared the ability of the original and mutant strains to colonize roots of Arabidopsis, the established communities of the "immune-active" bacteria were significantly smaller. This suggests that the capacity to suppress plant defenses may support the ability of the symbiotic bacteria to co-exist with their plant hosts.

There you have it – for plant-beneficial bacteria, a sprinkle of acid a day keeps the (plant) law enforcement away. 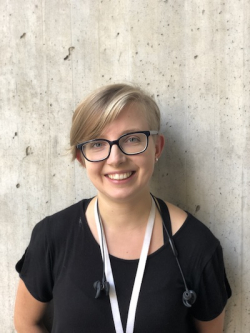 Aleks Prochera is a Ph.D. student at Harvard Medical School. She works in the laboratory of Dr. Meenakshi Rao where she studies workings of the enteric nervous system. When not in the lab, you can find her reading, writing, over-thinking life, and meditating or doing yoga.