Flagella By the Tail

The world of phages is strikingly diverse. Some phages use RNA to encode their genome, others DNA. Some are tiny, others a thousand-fold larger. Some are bare icosahedrons, others are festooned with fancy threads. And each picks a favorite replication strategy from a large menu. To appreciate the splendor of the phage world, I cannot think of a more satisfying source than the book 'Thinking Like a Phage,' by the erstwhile collaborator in this blog, Merry Youle. She says: 'Although outside our normal vision, the phage multitude is always there – an ancient, dynamic, bubbling, creative force that underpins all life on Earth.'

If I had to choose one kind of phages as my favorites, it may well be the 'flagellotropic' ones, the sort that stick to their host's flagella for the initial step of multiplication. Of all the varieties of phages, I reckon that this is among the most surprising. In fact, if they did not exist, there is no way I could have dreamed them up. How on earth can sticking to a flagellum lead to multiplication? 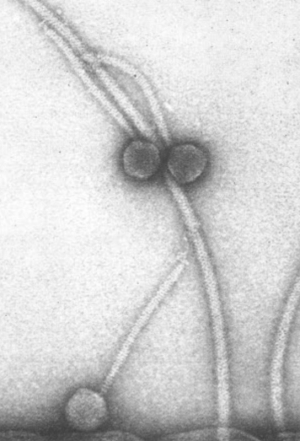 Figure 1. Attachment of bacteriophages to flagellar filaments of Escherichia coli. The phage in the bottom half is attached to the flagellar filament by its tail fiber. The two other phages appear also to be attached to the filament.  Stained with phospho­tung­stic acid. X 160,000. Source. Frontis­piece (from this post): A PBS phage with its three tail fibers wrapped around a B. subtilis flagellum. Source

Flagellotropy, it turns out, is not a new story.  A phage called Chi (or χ), which induces a lytic cycle in Salmonella enterica, was discovered in 1936 and soon found to infect only host cells that are flagellated and motile. No flagellar motility, no infection. This turned out to be quite handy as Chi-resistant mutants could readily be used to isolate mutants with defects in flagella formation or function.

As the electron microscope became available, it revealed that Chi phage particles attach to flagella via a single long kinky fiber on their tail. Later on, it was shown that the phages do not enter into the core of the flagellum, as had been thought earlier by some. Rather, they slide along the flagellar filament, towards its site of insertion on the bacterial surface. The phages ratchet down the flagellum until they reach the bacterial surface. Here, they encounter a classical cell envelope receptor and can now deliver their DNA, to start the process of multiplication. In the words of Michael Yarmolinsky in these pages, 'As a macroscopic observer, I view the ability of Chi to lasso and ride astride a spinning filament as an acrobatic feat out of the Wild West. The details of this rodeo could be interesting.'

Flagellotropic phages have been found to infect other bacteria, notably Aeromonas, Campylobacter, Pseudomonas, Caulobacter, and Bacillus subtilis. The interaction between phage and flagellum is specific and requires a kinship between the bacteria and their phages. Some phages have not one but three fibers sticking out of their tail, all of which wrap around the flagellum after adsorption. Oddly, some Caulobacter phages stick to the flagella via a single filament emanating not from their tail but from their capsid, thus they attach head first. Strangeness reigns here. 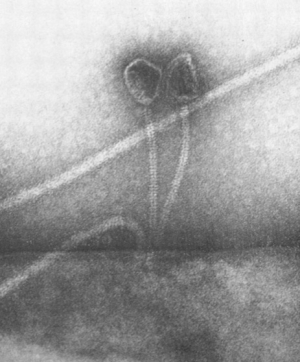 (Click to enlarge) Figure 2. Attachment of bacteriophages at the base of Escherichia coli flagella. The phage heads are empty. The bacterial surface occupies the lower part of the micrographs. Negatively stain­ed with uranyl acetate. X 160,000.  Source

Flagella are not the only long, thin bacterial appendages to which phages can attach. Pili count too, which has prompted some to postulate that binding to any long bacterial filaments increases the 'capture radius' of phages several times over that of the bacterial cell body alone. Since phages are not motile and depend on random collisions for contact with their host cells, this strategy increases the frequency of successful encounters.

Why Are Active Flagella Needed for Phage Infection?

Why is just sticking to a flagellum not enough, but instead active rotation of the flagellum is required? A simple bit of teleology tells us that this is a good thing: phage do not gain from infecting metabolically inert host cells, as they would not replicate in them. So, flagella that are actually beating becomes a signal that the bacteria are physiologically active and therefore likely to support phage development.

How Do Phages 'Glide' Down the Flagellum?

How do the phage tail fibers and the flagella interact and how is the phage translocated to the bacterial surface? A model by Samuel et al. from Berg's lab provided evidence for a 'nut and bolt' model for translocation of phage along the filament. Here, the tail fiber of Chi fits the grooves formed by helical rows of monomers of the main flagellar protein (flagellin). Active flagellar rotation now forces the phage to follow the grooves, just as a nut follows the threads of a bolt. Using E. coli mutants where the direction of flagellar rotation (clockwise or anti) could be changed, these workers showed that if the rotation is CW, the cells were Chi resistant, if CCW, sensitive. In addition, tampering with the thickness of the bolt (the flagellum) greatly altered the sensitivity to Chi. This emphasizes the need for accurate matching between 'nut' and 'bolt'.

The movement of the phages along the flagella is likely to be a complex story. In fact, a recent theoretical treatment of such questions proposes that the speed and translocation along the flagellum depends on specific determinants in the flagellin subunit.

What Happens When the Phages Reach the Bacterial Surface?

We now know that the site of delivery of the phage DNA is not the flagellar filament but rather a region near its base. When the phage reaches it, it can deliver its DNA into the host, as demonstrated by the presence of empty (DNA-less) phage heads at the base of the flagellum. The whole thing takes less than 5 minutes. As many as 5 phage particles can be seen at the base of a single flagellum. The phages located here are not oriented at random but rather, the tips of their tails lie parallel to the tip of the flagellar hook. All point in the direction of the insertion of the hook.

Which Proteins Are Involved In The Interaction Between The Phage Tails And The Flagella?

A recent paper studied the participation of several proteins of Chi-like phage of Salmonella. The phage consists of an icosahedral capsid and a non-contractile tail with a long, curling tail fiber (the part that interacts with the flagella). This phage encodes for 71 proteins, 24 of which are found in the mature virions. Of these, two make up the tail tube: YSD1-22 the main shaft and YSD1-25 part of the tail spike. The long flexible tail fiber consists of protein YSD1-29. A detailed analysis of all the proteins of this phage led to their annotation and hints as to their likely functions. Thus, molecular aspects of the process of flagellotropy are being unearthed and with them, a better understanding of this wondrous phenomenon.