Forbearance with the Escherichia coli Nucleoid

Here at STC we were left in awe by two images that were published earlier this year. We show them, side by side, in Figure 1. One is of something very large, the other of something very small. Yet their similarity was inescapable. Exactly what are these images of? On the left, the first direct image taken of a supermassive black hole at the center of the Messier 87 galaxy. On the right, a ring-shaped nucleoid of the bacterium Escherichia coli. Of the black hole much has been written but since here we consider the small things, we wanted to delve deeper into the significance of the image on the right. Figure 1. On the left, a supermassive black hole, Source. On the right, a ring-shaped nucleoid of E. coli. Source

Apart from their different sizes, the image of an E. coli nucleoid next to the image of the black hole is particular­ly striking, because the secrets of the two objects lie in different parts. The black hole keeps the mystery in its center, while the secret of the E. coli nucleoid lies in the ring-like structure. It represents a circular DNA molecule, about ~1.5 mm in length which is nearly 1000× longer than the length of the cell that harbors it (about 1 µm). In the image, the structure is at rest. But in the living cell the molecule is duplicated by so-called replisomes into two rings that segregate into the daughter cells. Dozens of laboratories have produced hundreds of publications on the subject and yet we still do not fully understand how the processes of replication and segre­ga­tion are organized in the cell. So we did what we often do, sought the opinion of an expert, some­one who is deeply steeped in the studies of nucleoid structure and function. Fortunately for us, our friend and colleague Conrad Woldringh agreed to provide us with comments on two recent articles from the laboratory of Cees Dekker.

Adding to the enormous existing literature, the Dekker group recently produced two articles (Wu et al. 2019 and Japaridze et al. 2019) using their ability to visualize a ring-like nucleoid (right side of Figure 1) and to study its properties and dynamics during rest and replication. How did they ob­tain such a ring-like structures? They reasoned that the normal rod-shaped E. coli cell was too thin to allow direct clear visualization of its nucleoid. To provide the enormous DNA molecule with more "wiggle room," they devised a way to simultaneously make the cells wider and force them to contain a single nucleoid. To achieve a greater cell width they turned the rods into spheres by in­hibiting the cell's ability to make its cytoskeleton. Specifically, they treated the cells with A22, a compound that inhibits the polymerization of the actin-like protein (MreB) that makes up the E. coli cytoskeleton. To have these round cells contain a single nucleoid, they used a dnaCts mutant that is unable to initiate new rounds of DNA replication at high temperatures. At the non-permiss­ive temperature, ongoing rounds of replication were finished but no new ones could start, thus leaving each cell with a single nucleoid. The cells re-started a round of replication by shifting the cells briefly (10 minutes) to the permissive temperature. Those techniques yielded the wider cells with a single nucleoid. How did they visualize the nucleoid? 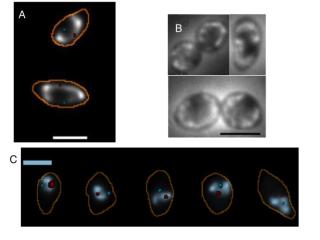 Applying microscopy techniques such as epi-fluorescence and 2D and 3D structured illumination microscopy (SIM), the Dekker group could visualize simultaneously the entire chromosome, and specific DNA regions such as the origin of replication (oriC ) and the chromosomal terminus (ter ). In both articles the chromosome was tracked by its binding of a fluorescent protein (HU-mYPet, Figure 1 right side), while the position of oriC and ter could be followed using a fluorescence repressor operator system (FROS, Figure 2, panels A & C). To visualize the position of the replisomes, they labeled a key protein in the fork complex with a fluorophore (the ß-clamp, DnaN-mCherry, Figure 3C).

In their images, the out-of-focus noise is strongly reduced by application of a computerized deconvolution program. In this way, they were able to define a ridge line (the edge along the contour) in the circular chromosome and to measure along its contour the local amount of DNA (HU-mYPet fluorescence). Knowing the position of oriC and ter on the ridge line, the local DNA density could be correlated to the genomic contour distance (expressed in nm or as percent of the distance from oriC ). 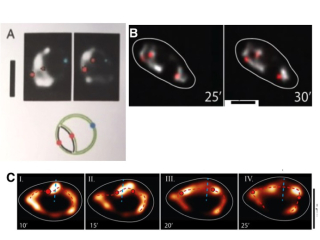 The novel live-cell imaging of the E. coli nucleoid presented in these two articles establishes two important properties of the bacterial chromosome: its dynamic organization in blob-like, megabasepair-size domains, and the independent movement of the replisomes according to the train-track model (confirming prior observations of Sherratt's group, Reyes-Lamothe et al. 2008). Below, I will discuss two different but related aspects of the work: the opening-up of the chromosome in widened cells and the segregation of DNA strands in the early replication bubble.

An opened nucleoid in widened cells

The widening of the cells caused an opening-up of the chromosome and the appearance of blob-like domains partitioned along the contour of the ring-shaped nucleoid. Prominent domains were found near the centers of the left and right chromosome arms, while oriC and especially the ter region showed a lower DNA density. It is remarkable that between the blobs and especially around ter, DNA domains are linked through thin strands. It should also be noted that the domains show dynamic rearrangements in a 5 minute period (For example, see Figure 4A in Wu et al. 2019).

The authors ask why the nucleoid did not open up into a globular cloud such as seen in osmotically shocked E. coli spheroplasts called "balloons" (as shown in Figure S1D of Wegner et al. 2012)? The answer must lie in the concentration of cytoplasmic proteins present in the widened cells, but which have become diluted in the "balloon" structures. As theoretically predicted and experimentally confirmed by Theo Odijk, a high concentration of soluble proteins establishes a phase separation in the cell between DNA and cytoplasm through the action of molecular crowding or volume exclusion (Odijk 1998). Apparently, the protein concentration in the "balloons" is too low to maintain the phase separation, but remains sufficient in the widened cells.

In Figure 2, I compare the single nucleoids in widened cells with the multiple nucleoids present in spherical E. coli cells obtained by inhibiting peptidoglycan synthesis with mecillinam (Zaritsky et al. 2006). The peripheral position of the DNA (Figure2, panels A & B) can be abolished in both systems by inhibiting transcription (with rifampicin) or translation (with chloramphenicol). This causes the collapse of the ring-shaped nucleoid in the cell center (Figure 2, panel C) or the coalescence of replicating nucleoids (see Figure 4, panels B & C in Woldringh et al. 1994). Therefore, we previously suggested that the process of "transertion" (cotranscriptional, cotranslational translocation of envelope proteins; Norris 1995) is involved in pulling the chromosome to the cell periphery. Whether this process is also involved in the opening up of the replication bubble is a question I consider below.

Segregation of chromosome arms in the early replication bubble

In Japaridze et al. 2019 (their Fig. 4f) the authors describe how, upon initiation of DNA replication, the duplicated origins move apart in random directions, while after some time "as the amount of replicated DNA locally increased, they would re-orient towards the long axis..." (Supplementary Fig. 10) I like this description. But, do we understand what is happening here, in the early replication bubble?

In Figure 3, I collected images from both articles showing early replication bubbles of either separated origins or moving replisomes. While the origin spots are often positioned in or near low-density DNA blobs (Figure 3, panels A & B), the replisomes (Figure 3 panel C) are usually found next to large DNA domains that contain up to 20% of the whole chromosome (Japaridze et al. 2019 Supplementary Fig.7). As far as I am aware, these observations show, for the first time, how newly synthesized DNA strands become packed in separate blob-like domains in living cells.

From their images the authors conclude that newly replicated sister strands stay cohesed for about 15 minutes before separating to form a larger replication bubble. Such cohesion or interlinking of newly replicated sister strands is supposed to occur through the formation of so-called precatenanes which form behind the replication fork during its progress. This interlinking can be relieved through the action of topoisomerase IV (Wang et al. 2008).

It is difficult to envisage how, on a molecular scale, this resolution of interlinked sister strands can occur in a dense meshwork of DNA segments, where the leading sister strand can form branched supercoils (Wegner et al. 2012), while the lagging strand is still involved in the ligation of Okazaki fragments. If I understand the authors correctly, Fisher et al. 2013 refer to this problem when they write: "The need to reduce nonspecific meshwork linkages is a notable, not often emphasized, concern. Many chromosomal molecules nonspecifically link pairs of DNA segments (Reyes-Lamothe et al. 2008). Linkages along a chromosome fiber could play positive roles (e.g., as organizational loops); however, linkages between unrelated segments will tend to create an immobile gel incompatible with both global and local dynamics."

In spite of the expansion and opening up of the nucleoids in the widened cells, the resolution of the present images, showing either origins or replisomes, is insufficient to reveal how sister strands become separated after their cohesion has been resolved. It is clear from Figure 3, panel B that after about 15 minutes, the sister strands open up in a replication bubble. But how does this occur? Is it just the enlarged "wiggle room" that allows the sister strands to come apart through entropic interactions? Or is the process of transertion, which was suggested to open up the nucleoid (Figure 2, panel A) and to pull whole nucleoids to the cell periphery (Figure 2, panel B), also involved here? Because the segregation of chromosome arms continues in the absence of transcription (Wang and Sherratt 2010 and Woldringh et al. 2015) the latter possibility seems less likely.

We thus have to wait for further observations in which, inside the labeled bulk chromosome, mul­ti-colored loci of the left and right chromosome arms are visualized in time-lapse experiments to­gether with origins and replisomes. 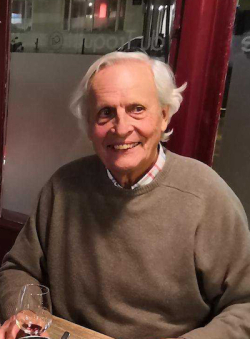 Conrad Woldringh is a member of the Swammerdam Institute for Life Sciences at the University of Amsterdam.