The Continuing Saga of Insect-Associated Streptomyces

For some reason that I cannot really pinpoint, I am continually fascinated by the interactions that are continually discovered between insects and bacteria. Among some of my favorites are those that involve insects that carry bacteria that produce antimicrobial compounds that in turn provide a useful function for the insect. Two such that immediately come to mind are the leaf-cutting ants and the Southern Pine Beetle, both discussed previously in STC. So, one might ask, how often have insects taken advantage of a bacterium's ability to make an antimicrobial? That is precisely the question addressed recently by a large international group of investigators, led by Monica Pupo (Sao Paolo) and Cameron Currie (Madison). The answer, perhaps not surprisingly, is that this is a widespread and common strategy in the world of insects. And it may provide interesting new com­pounds that may eventually prove useful for humans. 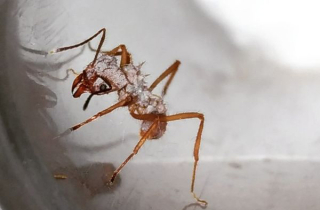 Based on their anecdotal experience from studying di­verse insects, these investigators reasoned that Strep­to­my­ces isolated from insect microbiota could be an ex­cellent source of antimicrobial compounds. Importantly, they felt that although insect-associated Streptomyces have not been extensively screened, they have had a different evolutionary history than their soil-inhabiting counterparts. Therefore, antimicrobials isolated from them stand a good chance of being novel.

Before diving head on into a massive world of insect-associated Streptomyces strains that are available, they determined that they were indeed present in most insects. Metagenomics gave them the confidence they needed: Streptomyces-specific sequence reads (indicative of abundance), were similar in insect-associated and from soil. With this as a starting point, they proceeded with a gargantuan screen of over 50,000 individual antimicrobial bioassays of some 2000 Streptomyces strains isolated from diverse locations around the world. They tested these against 27 different microbes of clinical and ecological relevance. Their ideas proved correct, in general, insect-associated strains exhibited greater inhibitory activity towards the tester strains than soil- and plant-associated strains. Quite interestingly, the extracts displaying antimicrobial activity were seldom cytotoxic! They reasoned that this might be related to the fact that their production is in animals, so there could have been selection against such toxicity. This, of course, is great news when it comes to potential use as antibiotics or antifungals in the clinical setting. The authors went on to present additional results showing  that many of the compounds made by the insect-associated strains are quite diverse and novel, as judged by both sequencing of biosynthetic gene clusters and mass spectroscopy of crude extracts.

To add icing to the cake, they went on to purify and characterize an antifungal, which they named cyphomycin, from one of the insect-associated strains. This proved to be a novel compound, though related to a family of antitumor compounds. Cyphomycin, however, showed no toxicity in mouse studies, a good thing if it is ever to become a useful antifungal.

All in all, these are quite promising results, which the authors couch in evolutionary terms: "Insects, through evolution, are predicted to have undergone millions of years of continual bio­prospecting for active, defensive molecules; pathogen pressure selects for association with Strep­tomyces strains that produce efficacious antimicrobials. Furthermore, insect symbionts are uni­quely suited to medicinal discovery, as their host associations appear to enrich for compounds with low toxicity to animals." Kudos to insect-bacterial symbioses!