To grow or not to grow? That is the question!

What happens to bacterial populations as they transition from a state of rapid growth to little or no growth as a consequence of diminishing amounts of nutrients? It seems that every time this question is addressed in a new setting and/or a different species, some fascinating new features of bacterial adaptability are discovered. Before I tell you about one new such discovery, I have to start with full disclosure: the question of nutrient deprivation has fascinated me for a long time; it was a driving force behind a lot of the research carried out in my lab for decades. That explains why I am so very excited about these new results. It also explains the reason why I'm going to break with STC tradition. We do not usually describe our own research on these pages but today I will. So, let me start by briefly going over some work that was done in my lab during the 1990s that deals with one particular bacterial survival strategy seen when the population as a whole ceases to grow as it runs out of food. 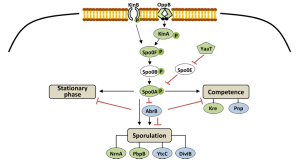 If there is something we have learned from decades of studying microbial stress responses, it's that when conditions are less than optimal for growth, individual microbial cells alter their patterns of gene expression to adapt to those new conditions. But sometimes, those phenotypic adaptations are not enough, and cellular death ensues. That's when another type of adaptation can occur. Mutants may exist, or arise, in the population that survive and even grow under the new conditions. This is extremely exciting because natural selection acts on such mutants and evolution can be seen to take place at very fast rates! That is exactly what we observed when studying cultures of Escherichia coli that had entered stationary phase. Once the death phase started, mutants arose in the populations with the unexpected ability to grow when the majority of the population was dying. Because these mutants had a Growth Advantage in Stationary Phase, we called the phenomenon GASP. Actually, we named them so because we liked the thought that these mutants were "gasping for life in stationary phase." Some of these mutants grew remarkably fast in the presence of their moribund ancestors; complete populations takeovers would happen in a matter of a day or two. What was the molecular explanation? Many of the "first generation" GASP mutants of E. coli that took over stationary cultures in LB medium had mutations in a global regulatory gene which eventually came to be know as rpoS. One feature of turning on the RpoS regulon is that, despite becoming more resistant, 'normal' cells become less able to use amino acids as a food source. As it turns out, dying cells release a lot of amino acids. GASP mutants escaped the population behavior of "hunkering down" and instead grew rapidly on the amino acids released by their dying siblings. Evolutionary cheaters they were. 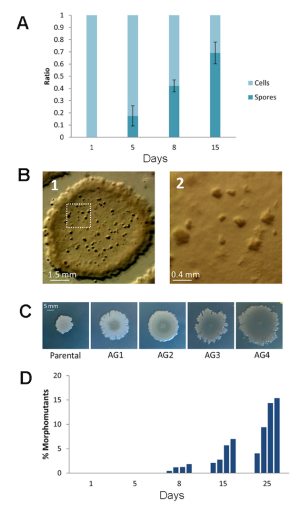 (Click to enlarge) Figure 2. The features of aging colonies. (A) Cells of aging colonies were collected at the indicated days, and samples were monitored using light mic­roscopy. (B) An image of a typical 25-day-old colony (panel 1), a magnification of the inset box from panel 1 highlighting the for­mation of microcolonies (panel 2). (C) Images of the parental strain and four rep­resentative morphomutant colonies af­ter 8 days of incubation. (D) Colonies of the parental strain were replated at the in­dicated days, and the ratio of morph­o­mutant colonies in the entire pro­geny colonies population was calculated. Each bar represents the ratio of morph­o­mutants derived from an aging colony at the indicated day. Four colonies were ex­amined each day. Adapted from Figure 1 of Source

While we and others continued to investigate the GASP phenomenon in E. coli, revealing additional selective advantages expressed by other GASP-conferring muta­tions, I always wondered what molecular mechanisms one might find in other bacterial species. In particular, the more I learned about Bacillus subtilis through our collaborative work on biofilms with Rich Losick and his group, the more I wondered how populations of this bacterium might behave during prolonged incubations. There was ample reason to expect interesting results. After all, this bacterium can mount much more elaborate responses to adapt to diminishing concentrations of nutrients. The expression of a complex network of genes, centered around the global regulator Spo0A, results in cellular differen­tiation pathways that yield at least three types of non-growing (or very slow growing) cells which often co-exist: extremely resistant dormant spores, genetically transformable "competent" cells, and hardy "stationary phase" cells. Work by numerous laboratories over many years has elucidated many of the molecular players involved in signal transduction and eventually generating these three cell types (see Figure 1).

It was a long wait (nearly thirty years) but it was worth it. Now, Rachel Hashuel and Sigal Ben-Yehuda (Hebrew University of Jerusalem) have published their results analyzing the behavior of B. subtilis populations in aging colonies grown in LB medium. They began by deter­min­ing that, under the conditions they used, after 15 days of incubation some 30% of the cells had not become spores (Figure 2A). What was the fate of these non-sporulating cells after so many days? Here's where the simple act of looking carefully at colonies (in my opinion, by far one of the most satisfying activities in microbiology) can provide all the direction needed. After a couple of weeks they observed that colonies developed papillae, or as the authors describe it: "emergence of small microcolonies arrayed over the mother colony" (Figure 2B). Just in case there was any doubt that the papillae resulted from growing cells, they analyzed samples from the colony under the microscope and saw dividing cells. Papillae in colonies is usually the result of adaptive mutations that yield mutants able to grow in those conditions where the rest of the cells in the colony are no longer growing very fast (if at all) and might even be dying. When they purified cells from the papillae they noticed many of them had altered morphologies that bred true, that is, they were mutants (Figure 2C). Consistent with the idea that the altered morphology mutants were the growing cells in the papillae, the percent of these "morphomutants" in aging colonies increased with the passage of time (Figure 2D). 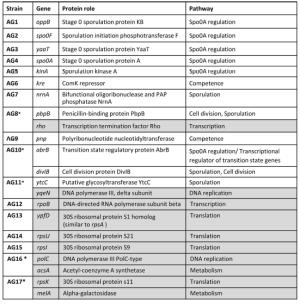 The identification of a clear phenotype of the cells from the papillae greatly aided them in the next step, mapping the mutations conferring the ability to grow in the aging colonies. Let me take an aside here about this concept of mapping the mutations. When we had GASP mutants thirty years ago, it took us months and some cases years, to map the mutations responsible (I will spare you the details). What a difference thirty years makes! Need to map the mutations? Simple: sequence the genome, get the result in a few days. That's what they did for 17 morphomutants and the results, right away, told them the story (Figure 3). About half the mutant strains had a mutation in one of the genes involved in the differen­tia­tion pathways shown in Figure 1. And what about the other half of the strains? Those morphomutants had mutations in genes involved in replication, transcription or translation – and there was already precedent for such mutations affecting the ability to enter into the differen­tiation pathways. When tested, nearly all of the morphomutants displayed some sort of defect in differentiation. In short, if a strain becomes defective in the ability to generate differentiated non-growing (or slow-growing) cells –  spores, competent cells or stationary phase cells – it will be able to escape growth arrest. Of course, the similarity of this phenomenon to cancerous cells in mammalian tissues did not escape the authors attention. Next question: What are these morphomutants growing on? This was not addressed in this study but I venture to guess that when the answer is known, many of the food sources will be some of the nutritional components of the dead cells in the colony. 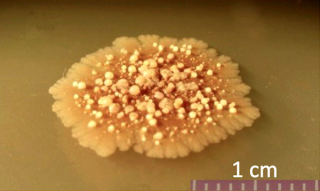 I was not alone in connecting these wonderful new results to the past. The authors link their work to our prior GASP work very nicely (many thanks!). But also, in a commentary that accompanies the paper, Wayne Nicholson mentions a long-term evolution experiment from twenty years ago in his lab where they obtained "bumpy colony" mutants of B. subtilis. (Figure 4). Like me, I suspect he has a small degree of melancholy at not having had next-generation whole genome sequencing back then. He simply froze those colonies back then; I hope he decides to sequence their genomes soon. Me, I very often dream of all the GASP mutants I would be sequencing today, if I were still doing experiments. But I just dream about those experiments, I certainly don't lose any sleep over the fact that I'm not doing them. Somebody else will!