(More than just) a Whiff of Taxonomy – Saltatorellus ferox

Last summer, I stumbled upon the name «Saltatorellus» when looking at a photo from a poster session at a microbiology congress. I found that name so charming! Stage names of jugglers and circus artists who perform audacious jumps and daring somersaults came to my mind. And in­deed, the name Saltatorellus ferox was given to a bacterium for exactly this reason – performing wild jumps... – and here is its formal description in a recently published preprint:

The GenBank accession numbers are MK559991 for the 16S rRNA gene sequence and CP036434 for the genome sequence. 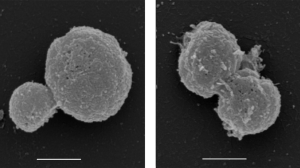 A short explanation for our readers who are not familiar with the term "preprint". Preprints are finalized manuscripts but which have not yet undergone the usual peer review process. Preprints have become established as a means of broad com­mu­nication in the life sciences in recent years because the often unreasonably long peer reviewing process delays the timely pub­lication of results. Nowadays, a number of journals encour­age authors to submit preprints rather than draft manuscripts for publication. From here onwards, we at STC will occasionally use preprints for our pieces, relying on our own judgment.

Saltatorellus ferox was isolated from coastal waters of the Baltic Sea – mostly brackish water with considerably lower salinity than 'normal' seawater – together with two other bacteria, both with less charming names, Rohdeia mirabilis and Engelhardtia mirabilis. On average, all three account for less than 2% of the bacteria found at 21 sampling points along the southern coast of the Baltic Sea. A thorough phylogenetic analysis told the team of 19 researchers from seven Dutch and German research institutions that all three new­ly isolated bacterial species belong to a separate clade of the large and diverse "PVC superphylum" (Planctomycetes, Verru­co­microbia, Chlamydiae). According to their phylogeny, this novel clade de­serves the rank of a phy­lum, Saltatorellota. But before I lose myself completely in the abysses of taxonomy, I'll simply refer you to their Figure 7a, the maximum likelihood phylogenetic tree of a genome-based alignment from 120 concatenated protein marker genes of 1,675 genomes (which looks a lot like a beautiful mobile by Alexander Calder). That was the taxonomy part... 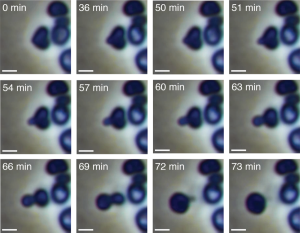 You may be wondering why a group of 19 researchers is need­ed to characterize three humble bacteria? Three rea­sons: 1. All in vivo, in vitro and in silico experiments they performed required qualified specialists who could tackle the open questions only as part of a joint effort. 2. Most of the 19 researchers were members of an even larger team that had embarked in the "Cultivation and functional characterization of 79 planctomycetes" to un­cover their unique biology, a paper that has just been published in Nature Microbiology. 3. One reason not to be taken for granted is almost hidden in the 'Materials and Methods' section of their preprint: "Given the very unusual observations we made, time-lapse experiments were performed in two independent laboratories with distinct experimental settings and from two independent investigators to double check all results." But now finally to Saltatorellus...

The ball-shaped Saltatorellus ferox cells (diameter 0.8–3.5 μm) divide either by budding or by bi­nary fission (Figure 1). There is no preference for either division mode in daughter cells that arose from binary fission, for example. The genomes of the Saltatorellota lack genes encoding the ca­no­nical set of bacterial division proteins, including FtsZ, yet Wiegand et al. did nevertheless find ty­pi­cal septa at midcell in coccoid (ball-shaped) cells of E. mirabilis by CET (cryo-electron tomo­gra­phy) next to the multiple invaginations of the cytoplasmic membrane, a hallmark of the Planc­to­my­cetes which had led to considerable confusion some years ago (see here in STC). 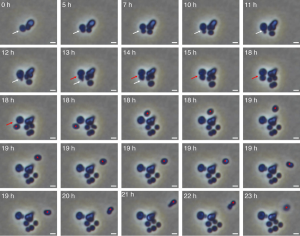 (Click to enlarge) Figure 3. A S. ferox cell seems to divide by budding (0–10 h, white arrow), but the budding process appears to be reversed (11 –12 h, white arrow) while a second division by asymmetric binary fission occurs afterwards (13 –18 h, red arrow). Once the daughter cell is se­pa­ra­ted (18 h, red asterisk), it starts to move (19 –23 h) while locomotion is related with shape­shif­ting. Source

There are two more puzzling observations in the context of cell division in S. ferox. First, Wiegand et al. have con­clu­sive evidence for the presence of periplasmic pepti­do­gly­can in this bacterium as they could prepare intact pep­tidoglycan sacculi ("support stockings"). However, and you can see this in one cell of the frontpage picture, the connection(s) between the peptidoglycan layer and both the cytoplasmic and the outer membrane seems to be much looser than in "normal" rods or cocci, and more malleable. This points to the possibility that cell division is a stepwise process in S. ferox, which affects the cyto­plasmic membrane, the peptidoglycan layer, and the outer membrane sequentially rather than in the single, well-coordinated step in "conventional" cell division. Se­cond, cell division in S. ferox is apparently reversible (Fi­gure 2): "A heart-shaped cell of S. ferox Poly30T (0 min) seems to start dividing by budding (0–60 min). The pu­tative mother cell shrinks (63–69 min) and fuses again with the putative daughter cell (72–73 min). This way, via partial budding and subsequent re‑fusion the cell moved on the agar cushion." Active bacterial "movement-by-cell-divison" is certainly surprising and clearly distinct from the passive dis­place­ment of neighbor cells by growth in an E. coli micro-colony. As far as I'm aware, rever­sible cell di­vison is without precedent.

Saltatorellus cells move well and gladly, but how?

The S. ferox genome encodes all genes for flagellar and twitching motility but Wiegand et al. never saw flagella or pili on their cells, nor other indications that these cells sport either of these types of movement. Saltatorellus was initially found attached to microplastic particles as cell ag­gre­gates. The bacterium preferred to continue with this lifestyle upon cultivation in the lab and showed no signs of adaptation to a planktonic lifestyle. Nevertheless, S. ferox cells can move over larger dis­tances, and rather quickly, in an amoeba-like fashion (Figure 3):"A cell seems to divide by budding (0–10 h, white arrow), but the budding process appears to be reversed (11–12 h, white arrow) while a second division by asymmetric binary fission occurs afterwards (13–18 h, red arrow). Once the daughter cell is separated (18 h, red asterisk), it starts to move (19–23 h) while locomotion is related with shapeshifting." Although the molecular 'machinery' driving cell di­vision is so far com­pletely unknown, it seems to be quite intimately connected to the cell's capa­bi­lity to move like an amoeba. This makes cytoplasmic cytoskeletal proteins prime candidates for finding answers to this puzzle. 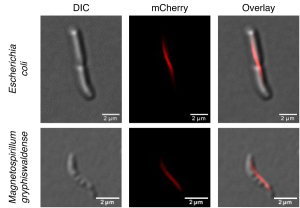 The S. ferox genome codes for the canonical bacterial cy­toskeletal protein MreB, an actin homolog, but lacks de­tectable homologs of eukaryotic motor proteins (think myosin, kinesin, dynamin). Thus, Saltatorellus cells aren't simply copycat-ing amoebal movement. Yet, and unlike most Planctomycetes genomes, the S. ferox genome – and those of its cousins E. mirabilis and R. mirabilis – en­codes a second actin homolog that Wiegand et al. call 'saltatorellin'. This protein is a homo­log of the MamK pro­tein of magnetotactic bacteria, which drives magneto­some movement by midcell-to-pole tread­milling growth of its actin-like filaments. They want­ed to know whether saltatorellin can form filaments in vivo when expressed as fluorescent saltatorellin-mCherry fusion in E. coli. They found filaments in E. coli along the cells' long axis (Figure 4, upper panel). When they ex­pres­sed this fusion protein in a mamK-lacking (ΔmamK) mu­tant strain of the magne­to­tac­tic bacterium M. gryphiswaldense, it appeared that it could even rather efficiently comple­ment the lack of MamK as the magnetosomes aligned well along the cell length (Figure 4, lower panel). For now, a specific function for MreB is not known, and it remains a spe­cu­lation that the filament-forming saltatorellin is involved in the amoebae-like movement of S. ferox and maybe even in chromosome segregation.

Saltatorellus – reaching out while staying put Besides its unusual way of cell division and amoeba-like locomotion, Wiegand et al. observed a third mode of "shapeshifting" in Saltatorellus ferox cells: the highly dy­namic formation and retraction of protrusions – they de­scribe this as "trunk formation" – especially among larger cells at the edges of cell aggregates (because only these cells were in one focal plane). Figure 5 shows a timelapse series of one such large cell that forms a trunk and with­draws it again at the same speed over a time period of 55 minutes (see also MovieS7). They observed that these large trunk-producing cells are not so much into multi­task­ing: they produce trunks when not actively dividing or jumping around (sorry: engage in locomotion). But the big cells may have issues with locomotion anyways be­cause of their "weight". Understandably, it is presently not known which molecular mechanisms trigger these different "behaviors". The researchers assume that 'trunk formation' is a means for S. ferox to take up nutrients more efficiently, something that is known for the pseudopodia of amoebae, and was recently described for Formosa spp. (Flavobacteria).

Outer membrane protrusions – which sounds definitively more scientific than "bulges" – were first seen in electron microscopic pictures. They are now found regularly for ma­ny bacteria of different families since researchers developed the careful handling procedures required for studying highly fragile samples of living and actively growing cells and their appendages under the microscope. These protrusions come in the form of OMVs (outer membrane vesicles) that are simply shed, or in the form of connected vesicles as in 'biopearling' (see Elio's recent snippet), or in the electron-transporting 'fairy lights' (our Pictures Considered #46). From Shewanella and Geobacter (see here in STC) we know of outer membrane protrusions in the form of branched or un-branched tubes ('nanowires'), which are also most likely involved in electron transport over distances of several micrometers (or even more). Yet such membrane protrusions are not confined to microbes from the domain Bacteria! 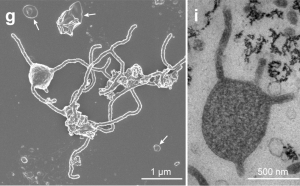 In a decade-long team effort, Hiroyuki Imachi and 22(!) colleagues from the Japan Agency for Marine-Earth Sci­ence and Technology (JAMSTEC) finally succeeded in iso­lating the first Archeaon from the Asgardarcheota – close relatives of the Lokiarcheota that are presently hotly de­bated as the possibly closest relatives of Eukaryotes – and growing it in the lab (with 13% abundance in a tri-culture containing Halodesulfovibrio (85%) and Metha­no­genium (2%)). As shown in Figure 6, electron microscopic inspection of 'Ca. Prometheoarchaeum syntrophicum' MK-D1 cells revealed extensive (outer) membrane pro­trusions that look strikingly similar to those of Saltato­rellus (Christian Jogler and his team saw them too, as he told me).

I will do it like Saltatorellus ferox and extend this blog post by "budding" (no, not by binary fis­sion!). So, in another post, expected to be the first next year (link not yet active!). I will take a look at chromosome replication and segregation in this unusual bacterium.