From Talmudic Question Musings to Good Reading on the Code

"There are twenty amino acids that occur naturally in proteins. Considering the diversity of protein structures and function, do you think that is small or large? "  Thus started my most recent mu­sings on crafting a possible Talmudic question. "Ah, but of course, there will the know-it-alls that will immediately negate the thought process by saying what about selenocysteine and pyrroly­si­ne? " That's not the point, really. Many years ago I had a conversation with Sydney Brenner about early life evolution and such matters. Simply aiming to start a conversation I said: "Don't you find it amazing that all that diversity arises from combinations of just twenty amino acids? Why didn't nature use more? " He smiled back and no, he is did not say "Consider selenocysteine and pyrroly­sine." He surprised me with his terse answer: "I often wonder why there are so many." So, is twenty a small or a large number of amino acids to base all of life on? The question has stuck with me for a while but before putting it before my tough audience of Elio and Christoph and figuring there might be many reasons it would not pass muster as Talmudic enough, I embarked in a little "googling." Within minutes I had compiled a vast reading list. Enough had been said about those twenty amino acids such that I figured this was not really Talmudic question material. 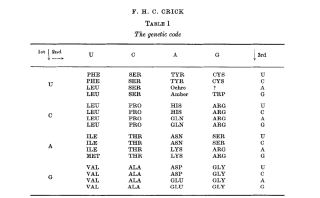 Figure 1. (click to enlarge) The Genetic Code Table as presented in source

But the reading list, what a delight! Ever since the genetic code was figured out in the 1960s, the topic of why those twenty amino acids are used in protein synthesis and, per­haps much more interestingly, why the code evolved to be the way we know it today, have attracted a lot of attention. Spoiler alert: there are no clear cut answers, which is why this topic still captures the imagination and do have a Talmudic sense. But many brilliant people have written on the subject matter at great length, so I thought I better recommend some good readings. For a couple of rather recent reviews, I refer you two that I found parti­cu­lar­ly well written and reasonably easy to follow: Saier's "Understanding the Genetic Code" and Koonin & Novozhilov's "Origin and Evolution of the Universal Genetic Code."

But for a real treat that will take you back to the thought processes of the 1960s, when the code had just recently been "cracked," I have one suggestion that – in my view – stands head and shoul­ders above other writings on the subject. Go read Crick's "The Origin of the Genetic Code." What a delight to read a molecular biology paper entirely based on logic. From the knowledge of which co­dons code for which amino acids, Crick goes on to argue against proposals that there were ste­reo­chemical interactions between tRNAs and amino acid side chains and in favor of an "acciden­tal" code that, once enough amino acids were in use, was simply "frozen." Here's a short quote to whet your appetite to go on and read this gem of a paper: "There is no reason to believe, however, that the present code is the best possible, and it could have easily reached its present form by a sequence of happy accidents. In other words, it may not be the result of trying all possible codes and selecting the best. Instead, it may be frozen at a local minimum which it has reached by a ra­ther random path."  And from such random path emerged the remarkable protein diversity extant in life today!