mRNA in E. coli : Not Lost Without Translation

Directly translating from the Latin, the quoted phrase reads "dwarfs ride on the shoulders of giants." This metaphor and its many derivatives have been used over the centuries to mean that new knowledge is discovered by building on previous discoveries. Most of the time, that is the per­ception we have when we think of progress in science. But every now and then, a new finding seems to come out of nowhere, greatly challenging prior ideas. Such might be the case on how we came to gain new knowledge regarding the structural organization of the basic processes of tran­scription and translation in Escherichia coli.

Figure 1.A portion of an E. coli chromosome be­ing transcribed (left to right) and being simulta­neously translated. The arrow points to the pu­tative site where RNA polymerase is first bound to the DNA. The chains of dark bodies are poly­somes, that is, several ribosomes on the same mRNA molecule. Note that the size of the poly­somes increases with the distance from the up­stream site where transcription began. Source

Let me start with a quick recount of old knowledge. For several decades – going back to the early days of mo­le­cular biology – the accepted view was that transcription and translation in E. coli were coupled, meaning that as soon as an RNA polymerase began to produce a nascent mRNA, ribosomes bind it and initiate translation. Perhaps the most striking early evidence in support of this coup­ling was provided by the electron micrographs that Miller and colleagues published in 1970. These ima­ges are re­markable and seemed to withstand the test of time. So much so that Elio chose one of them for the first "Pic­tures Considered" post of STC in 2013. I find the ima­ge so beautiful in its simplicity and power that I show it here once again (Figure 1). Indirect evidence for coupling had accumulated throughout the 1960s (including the first description of polysomes by Elio) but this picture came to cement in people's minds the general concept. It all made perfectly sense. E. coli because it had no nuclear membrane – like all Bacteria and Archaea – made this coupling not only possible but almost unavoidable; it was an easy con­cept to accept. The coupling came to be seen as a defi­ning feature that distinguished members of the domains Bacteria and Archaes from the Eukarya, as very nicely described in 2014 by Nanne Nanninga in another STC post. Transcription-translation coupling was also deemed most appro­priate to achieve fast growth rates and it allowed for the evolution of mechanisms whereby tran­scription was regulated by the state of the ribosomes following close by.

(Click to enlarge)
Figure 2. Mechanism of transcriptional atte­nu­ation of the trp operon. Source

Many features of E. coli gene expression studied ex­ten­sively in the 1970s fit perfectly in the context of coupled transcription and translation. Let me briefly remind you of the details of my two personal favorites: attenuation and polarity. In attenuation, because of the coupling, the RNA polymerase gets information regarding the state of the translating ribosome and either terminates tran­scrip­tion or continues to transcribe genes downstream (Figure 2). This is because a ribosome loads onto the nascent mRNA and initiates translation of a leader peptide so that it closely trails the RNA polymerase. In the case of atten­uation control of amino acid biosynthetic operons, the leader peptide gene is rich in codons for the cognate amino acid. When there are plentiful tRNAs charged with that amino acid, translation of the leader peptide pro­ceeds with the ribosome reaching the termination codon. By doing so, the ribosome masks a portion of the mRNA and the subsequent bases of the mRNA fold into a stem loop structure that tells the RNA polyme­rase to terminate transcription. However, if the amount of charged tRNAs for the cognate amino acid is low, the ribosome stalls at the corresponding codons. This results in an alternative mRNA structure, an antiterminator, that precludes the formation of the terminator. As a consequence, the RNA polymerase continues transcribing and thus the downstream genes are expressed. It is clear that attenuation absolutely depends on the coupling of transcription and translation.

Transcriptional polarity refers to the phenomenon where non-sense mutations (where translation termi­nation codons replacea sense codon) in genes located in the promoter proximal end of ope­rons cause decreased expression of genes located distal to the promoter. The molecular mecha­nism of polarity is conceptually similar to attenuation. In wild-type operons, translating ribosomes follow the RNA polymerase very closely and thus naked mRNA is not exposed. But, when a non-sense mu­tation causes the early release of the translating ribosome, the mRNA is exposed and the ter­mi­nation factor Rho can bind at normally occluded sites, resulting in early transcription ter­mi­nation. Here again, it is clear that this interpretation of polarity depends on the coupling of tran­scription and translation. 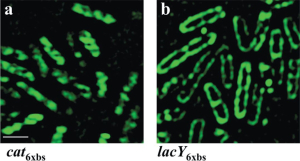 Figure 3. Subcellular localization of mRNA tran­scripts correlates with subsequent localization of their protein products. Fluorescence micro­scopy images of cells expressing MS2-GFP (gre­en) and transcripts containing or lacking bind­ing sites for MS2-GFP. "6×bs" after a gene's na­me denotes that the MS2 binding sites were in­troduced immediately next to this gene: a cat and b lacY. Adapted from Source

So much for old knowledge, now comes the surprise. It's February 2011 and a paper, led by Keren Nevo-Dinur from the group of Orna Amster-Choder (Hebrew Univer­sity of Jerusalem), bears the unexpected title "Transla­tion-In­dependent Localization of mRNA in E. coli." The abstract goes on to state: "In contrast to the view that transcription and translation are coupled in bacteria, our results show that, subsequent to their synthesis, certain mRNAs are capable of migrating to particular domains in the cell where their future protein products are requi­red." What had they done to allow such a bold claim? Their studies were both elegant and tho­rough. At the heart of their approach was the clever tag­ging of the mRNA of two genes whose final protein pro­ducts had two different cellular addresses: lacY, encoding the lac­tose permease – an integral membrane protein – and cat, encoding the soluble (that is, cytoplasmic) chloramphenicol acetyl transferase. How were the mRNAs tagged? Using a cute trick. Six repeats of a sequence which, when transcribed into RNA, becomes bound by the MS2 phage coat protein are first cloned into the gene of interest. Then, a fusion of the MS2 phage coat protein and the green fluorescence protein (MS2-GFP) is expressed in the cell. Visualizing MS2-GFP fluorescence thus identifies the location of the mRNA. The results were striking: the lacY mRNA localized to the membrane all around the cell periphery while the cat mRNA localized in the cytoplasm in a helix-like pattern (Figure 3). The authors carried out all the required and expected controls to ensure that these results were not artifactual (including fol­low­ing the fate of other mRNAs, for example, one encoding the membrane-bound sugar perme­a­se BglF). Then they went a step further. To determine if the mRNA localization was a property in­her­ent to the RNA and not the protein product, they uncoupled transcription and translation through the use of protein synthesis inhibitors. Sure enough, the specific localization of the diffe­rent mRNAs was not affected by protein synthesis inhibitors! In addition, when they uncoupled tran­scription and translation by introducing a stretch of rare leucine codons at the beginning of the bglF gene (creating a "translational blockage", they still saw the mRNA localizing to the membrane. All in all, the authors made a very compelling case that untranslated mRNAs can localize to distinct cellular addresses in keep­ing with where their protein product is to function. With this series of experiments they appeared to have put a major dent on a "defining" feature of cells lacking a nuclear membrane, the Bacteria and Archaea: the coupling of transcription and translation. 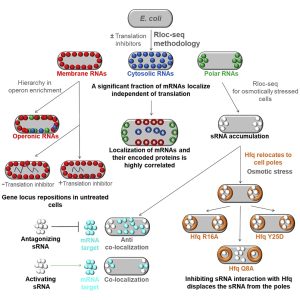 Remember, these results were published in 2011. Yet, here at STC (and elsewhere) there was still a strong sense that in Bacteria and Archaea, transcription and transla­tion were coupled. Perhaps the slow acceptance of this new Weltanschauung (worldview) was due both to the strength of the evidence favoring coupling and the fact that only a few genes were analyzed in the 2011 publi­ca­tion. But now, just last week, a paper by Kannaiah et al., also from the Amster-Choder group, presents a global analysis of the spatiotemporal organization of the E. coli transcriptome. To carry out the global analysis they de­veloped a technique that fractionates the cell contents and sequences the mRNA present (they call the approach "Rloc-seq"). The results are impressive, they detect who­le­sale specific localization of mRNA – at least half of it independent of translation – whereby the mRNA pla­ce­ment correlates with the final destination of the protein product (Figure 4).

In all fairness, to some investigators the lack of coupling was not all that unexpected. As far back as 2000, there were reports that there was clear segregation between the ribosomes and the RNA polymerase within cells. It just seemed that there was no room for most of the ribosomes to be near the nucleoid, where the vast majority of the RNA polymerase could be found.

Do these results completely overturn the prior notion of coupled transcription and translation in cells without a nucleus? Personally, I do not think so. Perhaps that is due to the fact that in this aging mind I carry too much intellectual baggage. Still, I do feel that the evidence for coupling is extremely strong; I hope I argued that case strongly enough at the outset. I am extremely impres­sed by the papers presenting the results of mRNA localization. But I was surprised that neither of these two key papers offers a discussion of these new results in light of what is known about such processes as attenuation and polarity, which obviously depend on close coupling between tran­scription and translation. In my own thinking, I look at that compelling electron micrograph of Miller et al. (Figure 1) and see the scale bar. Even a single gene transcript is likely to be around 0.5 microns in length. That's pretty long to have the RNA polymerase still transcribing while the 5' end of the mRNA, loaded with ribosomes, can be reaching a distant cellular address. I think that spe­cific mRNA localization and transcription-translation coupling are not mutually exclusive. But I would like to hear from the experts in the field. I sense that even though these results appear to shatter prior claims, the new knowledge still stems – at least in part – from "riding on the shoul­ders of giants."