In the original Spanish, the article starts with a pun. Manuel says that when he was an undergraduate, students often said that there were two kinds of biologists: ‘de bata’ (with lab coat) and ‘de bota’ (with boots). Manuel says that now there is a third type, ‘de data’ (with data.) 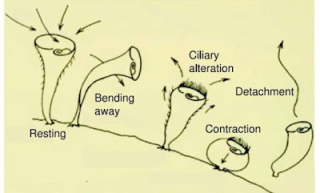 The story to be told here is about how a 'data' biologist had to 'put on his lab coat' to solve a problem of a 'boot biologist.' In 1906 the American zoologist Herbert Spencer Jennings conducted an experiment with the protozoan Stentor roeseli to determine how it reacted to an irritant stimulus. S. roeseli is a sessile, trumpet-shaped protozoan. Its narrow end carries an adhering structure, while the wide part is a cell mouth surrounded by cilia. These cilia create currents that trap bacteria and other protozoa, which are its food. Jennings' experiment consisted of "bothering" the poor protozoan by adding particles of the dye carmine with a micropipette and observing the result. The carmine particles were indigestible, so the protozoon simply turned away from them. If more particles were added, S. roeseli changed the direction of rotation of the cilia of the mouth, to "spit out" the particles and avoid ingesting them. But if the annoying stimulus continued, S. roeseli 'ran out of patience': first it contracted and then lifted off from the substrate to which he was fixed and went swimming elsewhere (see Figure 1).

Jennings' experiment demonstrated that a single-celled organism was capable of an escalation or a hierarchy of behaviors. This was something totally unexpected, since it was thought that such behavior could only be seen in multicellular organisms. Attempts to reproduce his observations were not very successful. In 1967, an article was published concluding that the results must have been an artifact, as the protozoan started swimming as soon as the annoying stimulus was added. Ergo, there was no hierarchy of behaviors. Jennings' observation would have remained a curiosity for biology historians were not for Jeremy Gunawardena, a systems biologist at Harvard Medical School. Gunawardena heard about Jennings' experiments at a seminar on the behavior of protozoa by the English biologist Dennis Bray. He was surprised and fascinated by the fact that a single-celled being had such a level of autonomy. So, he set out to review the work of Jennings and those who had tried to reproduce it. He came across a surprise. The 1967 study refuting Jennings had been conducted with the protozoan Stentor coeruleus. It turns out that S. coeruleus is a species that prefers swimming over remaining fixed to a substrate, just the opposite of S. roeseli.

Figure 2. (click to enlarge) Hierarchy of be­haviors of S. roeseli. On the left is the resting state. The mouth of the pipette where the irritant is added can be seen to the right of each photograph. The "bend and spit" state is not observed at all times. In the "shrink" state, the cell must make the decision whether it continues on the site or takes off and swim. The black arrow indicates that this decision is irreversible. Figure made from the supplementary video of the article by J.P. Dexter, S. Prabakaran and J. Gunawardena.

Gunawardena set out to try to reproduce Jennings' experiments using the right species. And here he had a little difficulty. His training was in mathematics and his job to process molecular data for the faculty of medicine. So when he laid out his idea at group seminars, no one was interested in "ancient history and descriptive biology." Fortunately, Sudhakaran Prabakaran, a postdoc colleague of his and student Joseph Dexter, became interested in the idea and after they finished their work on computers, they 'put on their lab coats' to look at protozoa under the microscope. Ten years later they found some very interesting things and published their results. All the behaviors observed by Jennings for S. roeseli were reproduced, but with great variability. Some cells performed all four phases: bending, spitting, contracting, and loosening. But others just contracted and let go. This is where the three of them went back to being 'data biologists.' Analyzing the results of 57 experiments, they found that most of the time S. roeseli  bent or 'spat.' It then contracted and had to decide whether to stay fixed or let go and swim. Once contracted, there was a 50% chance that S. roeseli would stay fixed or swim away. The protozoan was 'tossing a coin.' According to Gunawardena, such imprecision is an advantage, as it allows these cells to distinguish between what to avoid and what to eat. This turned out to be one of the simplest biological systems with the ability to 'make a decision' (it is not the simplest system because I believe that this honor corresponds to lambda phage when it decides between lysis and lysogeny).

According to the authors, this result can have different consequences in other fields of cell biology since it shows that cells not only have a genetic 'program,' but also have a certain autonomy and can make decisions after processing information from their environment. It also shows that sometimes great advances can be made by making observations in the old style, albeit by analyzing them with modern techniques. 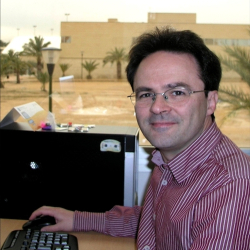 Manuel is a student of the microbiological aspects of popular movies. He has unearthed a surprisingly large number of interesting connections and has commented on them in his blog, Curiosidades de la Microbiología, as well as in a section of the Bulletin of the Sociedad Española de Microbiología called "El Biofilm," and elsewhere. He has also written about the use of movies as educational material, emphasizing 'Bugs and Movies', which is about the use of film clips to teach Microbiology. We have often reprinted his articles in translation.