« Where Do Phages of Atypical Bacteria Come From? A Snippet. | Main | TWiM 211: Bacteria, colon cancer and fire blight »

How to Swim Through Goo: Lessons from a Microbial Menagerie

One of my favorite childhood book/TV series was The Magic School Bus, which follows quirky sci­ence teacher Ms. Frizzle and her class in their magic school bus as they go on field trips to outer space, through the food chain, or inside the human body. I especially liked the episode in which the class shrinks down to the microscopic level and enters a sick classmate's bloodstream to help eradicate his bacterial infection. In the spirit of researching for this article and of reliving elemen­tary school memories, I went searching online and watched the episode again. The class shrinks and enters Ralphie through a scrape on his knee, dons what look like spacesuit-scuba gear hybrids (proper PPE?), swims around and discovers streptococci causing chaos in Ralphie's body, evades his immune system, and then all get sneezed out again. 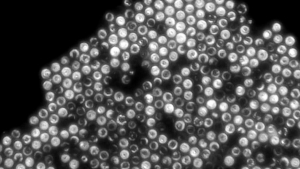 Figure 1. Thiovulum majus cells join forces to swim together at speeds up to 615 µm/s. Here is the video of the flagellated swim team in ac­tion. Source

In the fifteen years since last seeing this, I've learned a little bit more about how microorganisms of that size move and, sadly for imagination (and Ralphie), the laws of fluid mechanics would have interfered with the little science class's plans to rescue their friend. The freestyle swimming strokes that the class shows off in the blood­stream are pretty ineffectual when shrunk down to the micro- or nanoscale.

The Reynolds number, proposed by Osborne Reynolds in 1883, is the ratio between inertial forces and vis­cous forces. Because very tiny objects have little mass, momentum will be negligible, vis­cous forces will dominate, and the Reynolds number for bacteria will be very low. Swimming at the low Reynolds numbers experienced by bacteria would be like humans swimming through molas­ses. In this scenario, the freestyle stroke is out the window. Swimming freestyle in water is like throwing clumps of water behind you and using that inertial force to propel yourself forward. But if the water is replaced with gooey molasses, you won't be able to throw the molasses behind you fast enough before it goes back to its original place. So, you're stuck.

But motile microbes are unhampered. The fastest bacterium, Thiovulum majus, moves at 615 µm per second, a showstopping sixty body lengths per second that puts Phelps to shame (Fig. 1). The ways in which microbes have adapted to life at low Reynolds number are fascinating. 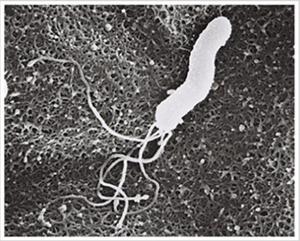 The classic bacterial flagellum is a perfect adaptation, as the constant corkscrewing motion forces the surrounding medium backwards to drive the bacterium forwards, but there are variations on the theme.

Helicobacter pylori, for example, has an extra accessory to overcome low Reynolds numbers. The namesake cell shape of Helicobacter enables it to better corkscrew through even more viscous surroundings like the mucus that lines the stomach (Fig. 2). H. pylori also secretes urease as it moves along, which breaks down urea in the stomach into carbon dioxide and ammonia, which in turn neutralizes the pH of the stomach mucus and causes it to temporarily de-gel. So, the bacterium effectively swims through the mucus in a force-field-like "bubble" of Newtonian fluid. 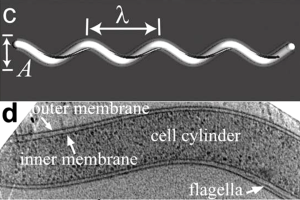 Figure 3. Image and lengthwise cross-section of spirochete B. burgdorferi. Source

Spirochetes possess an "endoflagellum" nestled within the periplasm and anchored at the ends of the cells, which can generate enough force to drill spirochetes through very viscous fluids, in and out of blood vessels, through skin layers, and through the blood-brain barrier (Fig. 3). The endoflagellum rotates, which can make the entire cell body undulate and move as a traveling wave. Alternatively, the rotation of the endoflagellum can cause rotation of the cell body itself and thereby generate torque to move it forward. Unsurprisingly, some highly pathogenic bacteria are members of the spirochetes. It's not much of a stretch to describe T. pallidum (syphilis), Treponema spp. (periodontal diseases), and B. burgdorferi (Lyme disease) as all-terrain vehicles.

Even stranger is the rod-shaped marine cyanobacterium Synechococcus, which does not have any flagella, nor is corkscrew-shaped (Fig. 4). Instead, Synechococcus inter­nally traffics cargo along helical cytoskeletal tracks, a mo­vement that generates traveling distortions in the crys­tal­line S-layer above, which in turn generates fluid motion and thrusts the cell forward. In this way, Syn­echo­coccus swims without even lifting a flagellum. 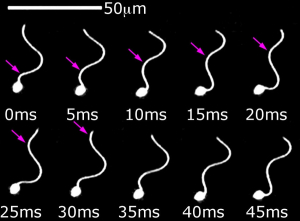 Figure 5. Time-lapse of sperm in motion via a ty­pical eukaryotic flagellum. Source

Meanwhile, on the eukaryotic side of things, the well-known means of motility is again the flagellum (Fig. 5). The whip-like eukaryotic flagellum propagates waves of bending from the base to the tip, which pushes against surrounding fluid to propel the cell forward. Again, eu­kar­yotes display some interesting deviations from clas­sic flagella. 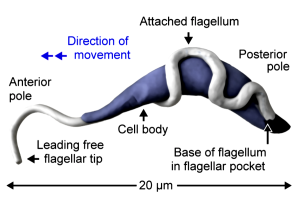 Trypanosomes, blood parasites responsible for, among others, sleeping sickness, possess a single flagellum that is not simply anchored to one end of the cell, but instead begins at one end of the cell, follows the cell body, and hangs out freely at the other end (Fig. 6). The part of the flagellum along the cell looks much like a dorsal fin on an eel. A eukaryotic nonconformist, the trypanosome fla­gel­lum has beats that originate at the tip and propagate to­ward the base, although the reverse base-to-tip beating has also been observed when the microbes swim back­wards when faced with obstacles.

The most outlandish of all of these microscopic swim­mers, to me, is the "swimming doughnut" Idionectes vortex, an amoeboflagellate that invades and consumes algal cells. The microbe truly lives up to its name of "pe­culiar swimmer with a vortex." The cell body of the od­dball is dome-shaped, with one flagellum snaking out of the flat side. When it swims, the flagellum curves around so that the microbe forms a ring. At low Reynolds num­bers, even a thin flagellum develops a fluid layer of relative thickness so that the cell effec­ti­ve­ly be­comes a 6-µm-thick ring with a cell-body bulge. This microscopic "doughnut" then rotates as pic­tured in Fig. 7, dragging fluid along to propel itself, like caterpillar tracks on tanks. 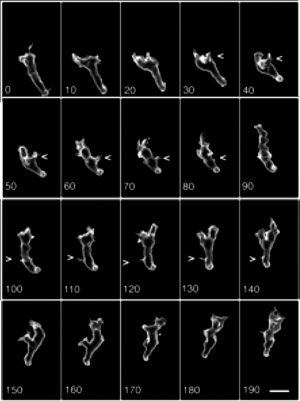 Figure 8. A time-lapse of a swimming amoeba, with spikes and lobes appearing to move rear­wards (indicated by arrows). Source

The more familiar amoebae and neutrophils, too, are ca­pable of swimming, despite lacking flagella (Fig. 8). These swimmers are highly dynamic shapeshifters, forming transient spikes and lobes and bifurcations that ripple across their membranes as they make their way forward. It's likely that these cellular projections emerge at the front of the cell and move rearwards before being re­absorbed, generating thrust in the process. This suggests that crawling on a substrate and swimming involve the same mechanism and machinery.

The physicist Edward Mills Purcell published a paper in 1976 titled Life at low Reynolds number, in which he wrote about the various ways in which microbes could swim. He proposed his Scallop Theorem: at low Reynolds numbers, momentum becomes irrelevant and so cells need to move via a nonreciprocal movement. Reciprocal movements, like a scallop opening and closing, or the freestyle stroke, are not feasible. Purcell proposed three alternate means of microbial movement, examples of which have all been touched on: one, a "corkscrew," like bacterial flagella; two, asymmetrical shape changes like "a flexible oar," like eukaryotic flagella; three, movement of the outer cell sur­face to drag the medium backwards, like the toroidal Idionectes (Fig. 9). 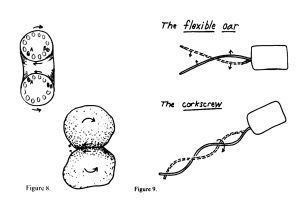 Figure 9. The three possible means of microbial movement as proposed by E.M. Purcell: the corkscrew, the flexible oar, and a dragging mo­ve­ment of the cell surface. Source

By necessity, microbes swim and jive in weird and wonderful ways at low Reynolds numbers. And, The Magic School Bus continues to be thought-provoking across ages.