« Stay Away, Stay Away – There Is Danger Ahead | Main | Whipple’s Disease and Its Bovine Ilk »

Pictures Considered #48 : Contributions to the Biology of the Bacilli 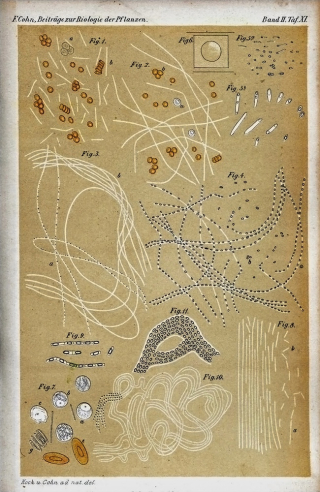 It was fifteen or twenty years ago, I can't recall the year any more. But I vividly remember walking into Harvard's Farlow Botany Library, being shown to a seat next to an elegant wooden table, and asked to don a pair of white gloves. The protocol stemmed from the fact that I had requested to see an original of the second volume of the journal Beiträge zur Biologie der Pflanzen (Contributions to the Biology of Plants), from 1876. I had been stimulated to enter this adventure by my friend and colleague Rich Losick; he knew well that inspecting a couple of articles published in this volume would be a thrill to anyone interested in the history of the studies of bacteria. My ability to comprehend German was (and continues to be) rudimentary at best. Nonetheless, I was thoroughly excited to be able to peruse the articles in their original printing and, most importantly, take in the simple beauty of their figures. That excitement made time seem endless as the librarian went to search for the volume in the closed stacks while I sat with gloved hands in the reading room. But the volume did eventually appear and once in front of me, I knew exactly where I wanted to start, inspecting the plate that contained the eleven figures from both articles. What were these publications I was so keen on?

The two articles, published back-to-back, were the fourth and fifth installments of the series Untersuchungen über Bacterien (Studies on Bacteria). Quite telling of the time these articles were published, that something entitled "Studies on Bacteria" should be published in the journal "Contributions to the Biology of Plants." The second article, the fifth in the series, some STC readers might be familiar with: "Die Aetiologie der Milzbrand-krankheit, begründet auf die Entwicklungsgeschichte der Bacillus anthracis" (The etiology of the anthrax disease based on the developmental history of Bacillus anthracis) by Robert Koch. Mind you, this is not quite the definitive "Koch Postulates" publication, that would come later. Rather, it is the first publication in which Koch provides evidence that Bacillus anthracis is the causative agent of anthrax. Importantly, in 1876, Koch was largely unknown. However, Koch connected with the editor of the journal, Ferdinand Cohn. Cohn accepted Koch's paper and published it alongside one of his own, the fourth installment in the "Studies on Bacteria" series: "Beiträge zur Biologie der Bacillen" (Contributions to the biology of the Bacilli). In it Cohn provides an in-depth description of his seminal discovery of spore formation by the "Hay Bacillus," now known as Bacillus subtilis. Cohn had recognized the great importance of Koch's work and, by publishing it right next to his own work, helped bring Koch into the center stage of bacteriology.

The display of the figures of both papers, all assembled on a single page, speaks volumes to the charming style of collaborative work of the early days of microbiology. With the current remarkable abilities to generate stunning images and the virtually limitless space afforded by electronic publishing, it is difficult to conceive of times where a single colored page would contain eleven figures from two different papers. I cannot be certain of this but judging from the style of the drawings, I imagine they came from the same hand and I have a feeling these were all drawn by Ferndinand Cohn himself. Call me romantic, but I cannot resist a longing for a time when editors drew, not only their own figures but also those of colleagues. But what I find most enthralling about these eleven figures is that, despite their being rustic and nearly 150 years old, the observations they depict provide a remarkably accurate view of the Bacilli, both in the host and as multicellular communities. I was fortunate enough to obtain a good translation of the legends to the eleven figures. Please, go ahead and gift yourself a little time, read each legend and carefully observe each figure. You shall not be disappointed!

Figs. 1-7. ANTHRAX BACILLUS (Bacillus anthracis). Fig. 1. Anthrax bacilli from the blood of a guinea pig. The bacilli appear as transparent rods, occasionally with beginnings of division, or bent, (a) white blood cells. (b) red blood cells. Fig. 2. Anthrax bacilli from the spleen of a mouse, after three hours in a drop of aqueous humor. The bacteria have lengthened into filaments. Fig. 3. From the same preparation as Fig. 2, after ten hours. The bacilli have grown to long filaments, which often are intertwined. (a) in isolated filaments strongly refractile bodies appear regularly spaced. Fig. 4. The same culture as Fig. 3, after 24 hours. (a) oval spores appearing like beads on a string have developed in the filaments. (b) many filaments are undergoing decomposition and releasing free spores, which occur singly or in clumps. Fig. 5. Spore germination. Fig. 5a and 5b at different magnifications. The spores elongate into cylindrical bodies, with the refractile area remaining at one pole. This body becomes smaller, breaks up into 2 or more parts, and finally disappears completely. Fig. 6. Diagram of the method of culture of anthrax bacilli. The fluid containing the bacteria is in the hollow of a hanging drop slide, covered with a cover glass which is ringed with olive oil to prevent evaporation. The slide is placed on a warm stage heated to body temperature, so that observations can be made during incubation. The bacilli are suspended in a drop of fresh aqueous humor. Even with the naked eye it is possible to see the developing masses filaments. Fig. 7. Appearance of the epithelial layer from the skin of a frog, in which a piece of infected spleen from a mouse had been placed. The layer consists of large, nuclear cells (a); in occasional cells many short, occasionally bent or crooked Bacilli (b) have been taken up, which have developed further within the cells and later escaped; (c) disrupted cell; (g) free spiral Bacilli; (e) blood cells of the frog. In addition, unaltered Bacilli are visible. Figs. 8-10. HAY BACILLUS (Bacillus subtilis). Fig 8. Bacilli in long parallel rows of filaments, which had formed an iridescent film on the surface of a boiled hay infusion after 24-48 hours. Between the parallel rows are seen short motile rods, or rods in the process of elongating. Fig. 9. Spore formation in the segmenting filaments of the hay Bacillus after 3 days. Fig. 10. Bacillus filaments encased in slime . . . at the left end of the figure can be seen the beginning of the formation of chains of spores in the filaments. Fig. 11. Portion of a mass surrounded by slime in which the formation of chains of spores is complete, and the single Bacillus filaments have become indistinct; the spores however are still arranged in parallel rows and are bound together by the slime. MAGNIFICATIONS, Figs. 1-7, 8 and 10, 65OX; Figs. 5b and 9, 165OX; Fig. 11, 9OOX. (Figure legend translation source)