« Talmudic Question #173 | Main | Pictures Considered #48 : Contributions to the Biology of the Bacilli »

Stay Away, Stay Away – There Is Danger Ahead 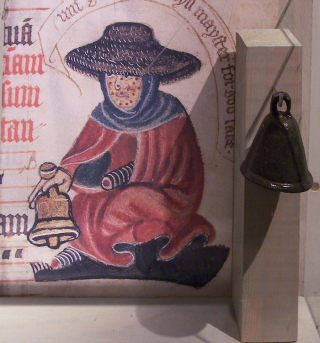 In ancient times, persons suffering from a dreaded disease believed to be contagious, such as leprosy, were given a bell to ring and thus noisily announce their presence. Healthy people could then move away and try to avoid contact.  Amazingly, bacteria use an analogous strategy. A recent Journal of Bacteriology paper from Siryaporn’s lab at the University of California at Irvine and others discloses that when Pseudomonas aeruginosa is exposed to phages or an antibiotic, it emits a signal that stops unaffected cells from moving and potentially entering a danger zone where they would be exposed to unamicable conditions.

The signal is obviously not the sound of a bell but a secreted chemical that is detected by the neighboring unaffected bacteria. The chemical is a compound called PQS (for Pseudomonas Quinolone Signal, or 2-heptyl-3-hydroxy-4-quinolone), and therein lies the tale. 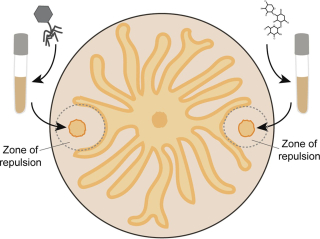 Figure 2. Illustration of Pseudomonas aeruginosa swarming on an agar plate, mimicking the experiments performed by Bru et al. Satellite colonies were generated by spotting cultures treated with either bacteriophage or antibiotic. Wild-type P. aeruginosa is spotted in the center. Source

But before going into that, what kind of bacterial movement do we deal with here? It is swarming motility, a system that some bacteria have to move on soft solid surfaces (typically semi-soft agar) using their flagella and a layer of a surface tension-lowering surfactant. On semi-soft agar, P. aeruginosa colonies spread in shoots from the site of inoculation, making for distinctive patterns (see figure 2). In patients with cystic fibrosis, swarming is thought to facilitate bacterial movement through mucous layers, which may contribute to the disease state. But swarming also means that bacteria unexposed to PQS could unwittingly move to spread all over, including into perilous territory. Thus, unless immobilized, these cells would enter a danger zone and potentially be killed. Production of PQS inhibits such motility and thus promotes the survival of the population.

The story of PQS is actually quite intricate. It is a particularly smart, multifunctional molecule: it acts not only as a stress warning signal, but also as a quorum sensor. On top of that, it activates an oxidative stress response and regulates the synthesis of virulence factors.  Such molecular sophistication is quite typical of P. aeruginosa, a jetsetter among bacteria that teems with regulatory factors. These include an array of quorum sensing molecules: it has no less than four of these, which is surprising because one could imagine that one molecule would do. These molecules cross talk with one another. For instance, two of their regulators, LasR and RhlR, affect the synthesis of PQS and of the PQS receptor, PqsR. But it gets more complicated, as LasR regulates RhlR, and another molecule, QscR, regulates LasR. Convoluted enough? This byzantine network of cross-talking signaling molecules, besides PQS,  affects important processes, including not just virulence genes but also those that are involved in iron uptake, outer membrane vesicle production, biofilm formation, and perhaps not surprising (this being Pseudomonas), swarming. 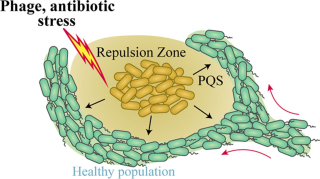 Figure 3. (Click to enlarge) Schematic of the collective stress response. Antibiotics and bacteriophage inhibit swarming motility and induce the production and release of PQS. The release of PQS repels swarms such that untreated bacteria do not approach the infected/treated area. The stress response potentially reduces the spread of phage and the exposure of P. aeruginosa to antibiotics. Source

The point of this paper is finding that two kinds of unrelated stresses, phage infection and exposure to antibiotics, inhibit swarming motility and thus prevent unexposed cells from traveling into the danger zone. Some of this could have been suspected earlier: a lysogenic phage was known to inhibit swarming. In fact, the genes involved in PQS synthesis are upregulated during phage infection. And adding PQS to agar plates resulted in a concentration-dependent inhibition of swarming.

Is presence of phage the only stress that leads to aversion of unexposed cells? The authors tried an antibiotic, gentamycin, which certainly causes stress in sensitive bacteria. Sure enough, gentamycin-treated cells did not swarm when placed on agar in a manner resembling that induced by the phage. Two unrelated antibiotics, kanamycin and fosfomycin, did the same thing. As expected, this proved to be due to the secretion of PQS.

The general conclusion is that Pseudomonas responds to multiple stressors by restricting swarming of healthy cells, the universal signal being PQS. The authors rightly consider this to be a novel phenomenon, which they call a ‘collective stress response.’ In their words, 'The collective stress response is activated by diverse types of stress and may provide the overall population with protection from the stress. In the context of bacteriophage infection, the stress response physically quarantines the infected population by repelling healthy (uninfected) swarms. This response may serve as a warning system to direct the healthy population to stay clear of the zone of danger. The overall effect is that the healthy P. aeruginosa population is protected from infection by the phage-infected population. Thus, the repulsion of uninfected P. aeruginosa swarms by the infected subpopulation reduces the potential spread of the infection to other parts of the population.‘

Do these mechanisms function in natural environments? If they did, they would ward off phage infection, perhaps operating in conjunction with others such as the CRISPR-Cas system. Note, however, that these devices are distinct from classical mutation to phage-resistant because here only half the bacteria surviving the phage became genetically resistant. Regardless, the authors have uncovered a strategy that keeps untreated bacteria from entering a danger zone, which could facilitate evasion from antibiotics and antibiotic-producing bacteria. In human disease, this could be good for the microbes, but it may lower the efficacy of antibiotic treatment for the patient. Are drugs that combat this microbial collective stress response in our future? Can we ‘silence the bell?’

This topic was discussed in podcast number 210 of This Week In Microbiology, called The Waze of Microbes.