« TWiM 210: The Waze of microbes | Main | How to Swim Through Goo: Lessons from a Microbial Menagerie »

Where Do Phages of Atypical Bacteria Come From? A Snippet. 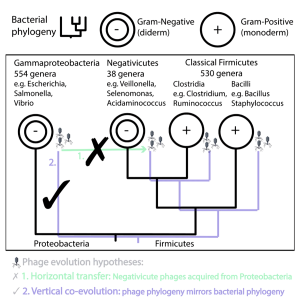 Some time ago, a piece in this blog dealt with the com­plexities of the Gram stain. In brief, it said: "In a simpler world, all bacteria with a single membrane, the mono­derms, would be Gram-positive, all those with two (the diderms), Gram-negative... Hah! Were it that simple! Each of these groups includes outliers that stain opposite from the expected way." ... "Most monoderms fall conveniently in the Gram-positive camp all right, but there are import­ant exceptions. First, the Firmicutes (so called for the "firm­ness" of their thick peptidoglycan cell wall) encom­pass the wall-less mycoplasmas and their allies, bacteria that cannot be stained by the Gram stain at all, which makes the point moot here. Next, some typical Firmicu­tes (the Negativicutes) stain Gram-negative. To make things worse, at least one firmicute, Acetonema, appears to have the prototypical Gram-negative property, an outer membrane. Having a thin peptidoglycan layer may place whole phyla within the Gram-negatives, despite being monoderms."

The question arises: Do the phages that infect the Nega­ti­vicutes come from the Gram-posi­tives or the Gram-nega­tives? The answer, as presented in a recent paper, is clear. They are derived from the Gram-posi­tive Firmicutes, as revealed both by their sequences and their genome organization (the genomic position of their lysis module). The only exception is a Mu-like prophage, which is characteristic of Proteobacteria. Conclusion: these phages and their bacteria co-evolved, despite the mobility that phages possess.