« Pictures Considered #48 : Contributions to the Biology of the Bacilli | Main | A Hitchhiker's Guide to the Ocean »

Whipple’s Disease and Its Bovine Ilk 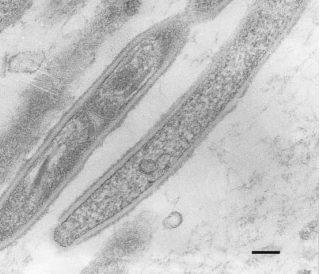 Whipple’s disease is both uncommon and strange. Among clinicians, it is best known for causing malabsorption, leading to malnutrition and even death. The causative agent is a bacterium but its identity was mysterious, being that it was (and remains) "not-yet-cultured" in laboratory media. It was one of the first bacterial pathogens to be identified using molecular techniques (see this 1992 paper by Relman et al.), and was subsequently named Tropheryma whipplei. This agent of Whipple’s disease is Gram-positive, a member of the actinomycetes.  A word about the genus name Tropheryma: trophe is Greek for nourishment; eryma for barrier, so called because it is a barrier to nourishment.

Within the host, the bacteria are found in the small intestinal mucosa that is infiltrated with large macrophages, which are filled with a material that is positive for PAS (a dye that stains polysaccharides pink). A positive stain of an intestinal biopsy is pathognomonic of the disease. The folds of the intestine become abnormally thickened and blunted, which impairs nutrient uptake. Why the unusual preference for this site is not known, but it leads to speculating that the organism is orally acquired and that intestinal macrophages are peculiarly hospitable. Although this intestinal location typifies Whipple’s disease, it can spread to other sites, such as the cardiovascular, central nervous, and musculoskeletal systems, where it causes a variety of symptoms. Fortunately, it is an infrequent disease in humans, with fewer than 2000 cases known. It has an interesting counterpart in cattle, called Johne’s disease, where it also induces malabsorption of food. 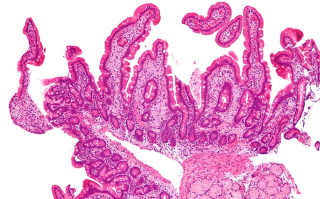 T. whipplei has yet to be grown on artificial media, although it does grow in lines of some macrophage-like cells. Thus, it was only recently realized, with the advent of new tools for detecting asymptomatic infections, that T. whipplei is not a rare invader. It is found so frequently in healthy people that it can be considered to be a member of the normal microbiome. In one study, it was found in the saliva of one third of 40 healthy patients. It is also common to find it in the environment.

Whipple’s disease is best diagnosed by pathologists examining sections of intestinal biopsies. It is usually treated successfully with antibiotics. I am told that discussions of this disease are common in hospitals' Infectious Disease conferences, where it is sometimes included in the list of possible causes of a difficult case (the 'differential diagnosis').  This is not surprising, given its varied clinical manifestations (still, is this scraping the bottom of the diagnostic barrel?).

Figure 3. (Click to enlarge) Pedigree of the family with four cases of Whipple’s dis­ease. Generations are designated by Roman numerals (I, II, III, IV, V and VI), and each individual is designated by an Arabic numeral (from left to right). Each symbol is divided into two parts: the upper part in­dicates clinical status for WD (black: af­fected, white: healthy, ‘?': not known); the lower part indicates whether T. whip­plei was identified by PCR (in saliva, blood, feces or joint fluid) or by PAS staining on bowel biopsy specimens (gray: T. whipplei -positive, white: T. whipplei -negative, ‘?': not tested). Whipple’s disease patients are indicated as P1, P2, P3, and P4; the pro­band (the first individual in the study) is indicated with an arrow. Genotype status and age (for IRF4-heterozygous indiv­id­uals) are reported below the sym­bols. Source

Since the organism is not rare, why do only very few people come down with the disease? There are reasons to believe that Whipple’s involves some specific defect in its patients' immunity, as patients with Whipple's are not particularly susceptible to other infections. So, what are these specific immune defects?

A recent report deals with a single family which, extraordinarily, has four cases of Whipple's. Here, the authors successfully carried out a highly detailed genetic study, leading to an unexpected finding. In the words of the editors, '...in one French family, an extremely rare mutation in the gene that codes for a protein called IRF4 may contribute to the development of Whipple's disease. This family had four members with Whipple's disease, all of whom had one copy of the gene with this rare mutation and one normal copy of the gene. The IRF4 protein acts like a switch that turns on and off some genes involved in the body's response to infection. In patients with this mutation, the IRF4 protein does not work as it should. The authors suggest that Whipple's disease may be caused by specific genetic mutations affecting the immune system in subjects infected by T. whipplei.' The article is authored by 37 investigators on four continents—in case you think that such a study is easy and straightforward.

As mentioned previously, Whipple's has many similarities with bovine intestinal TB, known as Johne's disease. Funny thing, both are caused by members of the same phylum, the Actinobacteria, Johne's by the acid-fast Mycobacterium avium subspecies paratuberculosis. I have a soft spot for Johne's because way back when we started a vet school at Tufts, the authorities requested that the med school basic science departments (us) teach the vets, not a small request. We tried to brush up quickly and hired a couple of new people to help shoulder the task. I became fascinated by Johne's disease. When an accrediting group of vets came to visit, I proudly steered the conversation to Johne's, thinking that it would show our visitors that we were up to the task of teaching vet students. Just like the kid who studied up on snakes for school who, when asked by the teacher about the elephant, said: "The elephant has a snout like a snake. Now, the snake…."  Now, Johne's disease…

I thank Joshua Fierer for pointing out the paper mentioned here.