A Little More Than Kin, Less Than Kind

"Our most bitter enemies are our own kith and kin."

So observes a character, a king, in the novel Sur Catherine de Médicis, a 'Philosophical Study' within the corpus of Honoré de Balzac’s writings he called La Comédie humaine. Shakespeare's Hamlet makes a similar observation regarding his uncle – now also stepfather – in a line that provides the title above.

The paradoxes surrounding the concept of 'kin' are not only an aspect of human familial relationships, but also central components of biology through evolution. As far as we know, all of the astounding variety of life we observe on Earth descends from a single cell, a primordial, universal common ancestor that gave rise to all current cells. In metaphor, a seed growing into all of the branches on the Tree of Life. Through this, all of life has a shared kinship, evidenced through such biological constants (or nearly so) of DNA, the genetic code, or the particular molecular stereoisomer that cells all use. That kinship permits connections between organisms through the connections shared at the molecular, genetic level.

However, there is something 'less than kind' that comes with close relationships. Namely, life has to compete over limited environmental resources that by definition we share through our kinship. So, despite our shared heritage, life enters into conflict. Biology, through the mechanisms of evolution, has provided cells with a spectrum of ways to assess relative kinship – close relatives versus more distant ones– and to respond through a spectrum that varies from full cooperation to antagonism. The molecular basis behind these cellular assessments and responses (social behavior) is linked to the evolution of multicellular stages of life, including in obligate multicellular organisms like humans.

A pair of notable books addresses these two very different aspects of the 'kin' concept. The first, simply titled Kin, by John L. Ingraham, explores the history of our understanding how life is genetically connected, and how studying microbes in particular led to a radically new image of that Tree of Life. The second, Kin Recognition in Protists and Other Microbes, by Guillermo Paz-y-Miño-C and Avelina Espinosa reviews the latest research on the ability of cells to differentiate self from non-self, and to cooperate in a community while excluding selfish, or cheating, behavior.

Kin: How We Came to Know Our Microbe Relatives 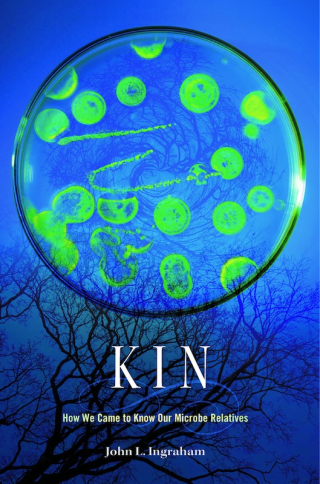 Writing for a general audience with a background in basic biology, Ingraham relates the story of how all life is connected through three parts that explain how microbiology has led to that understanding of biological kinship. In the first part, "Discovering the Tree of Life" introduces the reader to microbes, DNA, and the work of Carl Woese and his collaborators. It describes their discovery of the uniqueness of the Archaea and their arguments for restructuring the taxonomy of organisms according to phylogeny into the system of three Domains. These chapters highlight the central and dominant role that microbes play in evolution through their ubiquity and diversity, as well as their foundational ecological importance in their functional activities.

In the second part of Kin, "Doubts and Complications" introduces the phenomenon of horizontal gene transfer. Ingraham details the ways in which this both diversifies life while also linking the branches of the tree more intimately than previously expected, even across Domains. He also describes how this leads to a blurring of the boundaries between life at the species level, particularly for the microbes. Finally, in part three, Ingraham describes how the kinship between all of life now illuminates our ecological perspective of microbes as communities within macroscopic organisms, focusing on the human microbiome. In the final chapter, Ingraham goes full circle back to the origin of life to discuss how our current understanding of the relationship between cells may indicate how that universal common ancestor may have arisen.

For some readers of this blog, the broad, introductory nature of Kin may not offer much more than what you already are familiar with. However, for casual readers without a deep background in microbiology, the book is a quick primer with a full list of further reading that can be explored. Likewise, it is a book that could be given to readers who might not know much about microbiology, but who would appreciate learning about the foundational role they play in evolution and ecology. Kin finds itself weakest in the final part, with topics that seem tacked on to the main story. This particularly holds true for the chapter on microbiomes, which serve as the focus of entire books that would be better resources. Nonetheless, Kin overall is an informative and entertaining read. Our own Roberto offered a blurb of praise that you can find featured on the book's back cover, and I would second it.

Kin Recognition in Protists and Other Microbes

In contrast to the previous book, Kin Recognition is written for a more specialized audience, in the style of scientific review articles. Thus, it is one that will appeal to many readers here, from students of microbiology to beyond. Individual chapters might be of particular interest as a basis for discussion in seminar-based courses.

Paz-y-Miño-C and Espinosa are both experts in the field of kin recognition and kin selection research. These studies originated with William D. Hamilton, and others, who extended the work of Darwin to tackle the question of how biological altruism could arise despite the forces of natural selection through competition for limited environmental resources. To quote the authors' succinct explanation of Hamilton's Rule from the introduction of Kin Recognition:

“Close relatives would engage in altruistic cooperation to pass on the shared genes and minimize competition with kin. According to Hamilton… the fitness benefits (b) of helping another individual correlate with the coefficient of genetic relatedness (r) and are closely dependent on the costs (c) of helping. If the benefits (rb) surpass the costs (c), then altruistic cooperation could evolve…”

The bulk of their book explores the research that has uncovered the molecular basis behind the recognition of, and response to, kin in model species. This social behavior needs a way to discriminate and to avoid exploitation by 'cheaters' who might take advantage of cooperation without contributing anything of themselves. The first three chapters introduce the overall concepts and terms, such as individual 'greenbeard' genes that underlie kin recognition/behavior and (to extend the analogy) the suite of multi-color (polychromatic) genes that allow fine-tuned adaptation to a spectrum of relatedness or the potential of adversarial exploitation. While most chapters deal with specific examples of yeast and protist model systems of studying kin recognition genetics, the fifth chapter focuses on prokaryotic examples, before moving on to chapters that begin to link kin recognition/behaviors to the evolution of key features seen with multicellularity.

The second chapter of the Kin Recognition cites a recent paper from Nature Communications: "A polychromatic 'greenbeard' locus determines patterns of cooperation in social amoeba" by Gruenheit, et al. Using the model protist Dictyostelium discoideum, this paper demonstrates that a locus of polymorphic alleles (tgrB1-tgrC1) that encode cell adhesion molecules does show correlation between genetic variation and cellular cooperation phenotypes. Importantly, their data also suggests these polymorphisms increase fitness for the D. discoideum through avoidance of cooperating with molecularly incompatible partners.

Figure 3. (Click to enlarge) Self- and non-self discrimination experiments in D. dis­coieum. (Adapted by Paz-y-Miño-C from Hirose et al. 2011)

That topic serves as an example of how Paz-y-Miño-C and Espinosa structure their book and make it accessible to scientists who might not be too familiar with this field. They begin the chapter with a box listing essential terminology, with definitions, for important vocabulary items from the research they review/discuss, such as the pleiotropic tgrB1-tgrC1 alleles. While the main text gives an overview of the topic with citation to relevant papers, another side box is used to thoroughly highlight the experimental methods and data, with figures by the book authors (e.g. see Figure 3) that excellently illustrate complex concepts.

These two books thus provide insights into the biological concept of 'kin' from different perspectives, with different audiences in mind. However, both are superb at accomplishing the goals and style they set forth. Whether you think of kin with a warm feeling of comradery, or with a wariness toward a threat that might take advantage of your connection, these books on biological kinship are each worth checking out.