« A Hitchhiker's Guide to the Ocean | Main | TWiM 212: A coronavirus outbreak and IRF4 deficiency in Whipple’s disease »

For most English speakers, CPR would be assumed to stand for cardiopulmonary resuscitation, oftentimes a real life saver. But for many readers of this blog, the acronym has a whole different meaning. For the last few years, CPR, has stood for the "Candidate Phyla Radiation." The discovery of the CPR superphylum was (and remains) one of the most remarkable developments in our grow­ing realization that the genetic diversity of the microbial world is unimaginably vast. Christ­oph already presented a post describing members of the CPR, what he refers to as the Lilliputians among the microbes, since they are characterized as generally being strikingly small cells with extremely reduced genomes. Perhaps what is the most dramatic fact of the CPR is the almost complete lack of cultured representatives. It is indicative of how little we really know about the microbial world that this superphylum, which is thought to contain around one fourth of the total extant bacterial sequence diversity, remains largely "uncultivated." We know they are out there, we know precious little about their life. So, beyond the discovery of CPR, I think it is fair to ask what is life like for the CPR? One thing that emerges from early studies on CPR-assembled gen­omes and microscopic characterization of their cells, is that many of them are likely to be obligate symbionts, perhaps explaining our current inability to grow them as pure cultures.

There is one exception, one bacterium known as Nanosynbacter lyticus from the phylum Saccha­ribacteria (formerly known as TM7) has been grown in culture. Now, don't get the idea that it is possible to streak N. lyticus and have them form colonies overnight on agar in a Petri plate. It's not quite that straightforward. The authors of this work, published in 2015, showed the growth of ex­tremely small cells after cultivation of samples from the human oral cavity. Importantly, N. ly­ti­cus cells grew only when in coculture with Actinomyces odontolyticus strain XH001. All indi­ca­tions are that N. lyticus is an obligate parasite. N. lyticus cells were found on the outside of its partner host cell (as an episymbiont), and had a small genome (705 kb and ∼700 genes) that lacks many genes encoding essential functions. 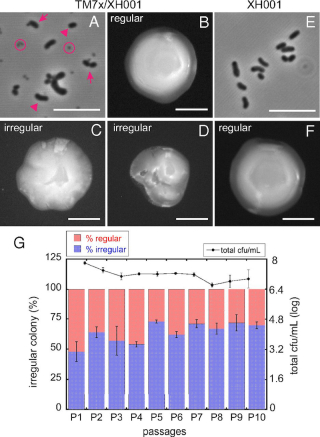 A subsequent paper by Bor and colleagues presents the next step in the analysis of cocultures of a strain of N. lyticus, called TM7x, and A. odontolyticus XH001. Their results give us a first glimpse into some interesting aspects of the life of CPR bacteria.

To disentangle the growth dynamics and interactions taking place this coculture, the authors first captured images using phase contrast microscopy and detected three different types of cells or cell aggregates: TM7x-infected XH001, TM7x-uninfected XH001, and free-floating, independent TM7x. When plated on blood agar media, on which TM7x alone cannot grow, they saw two colony phenotypes, one regular and round and the other irregular. These phenotypes corresponded to different genotypes: whereas irregular colonies contained XH001 and TM7x, the regular, circular colonies contained only XH001 cells. Continual passaging of the coculture always resulted in both colony types, indicating long-term co-existence of TM7x-infected and uninfected XH001 host cells.

What could account for the presence of these uninfected host cells in the coculture? To answer this question, individual XH001 host cells in monoculture and in coculture with TM7x were imaged in real time, to monitor cell growth (by measuring the cell area) to derive their growth rate (in doublings per minute). These imaging experiments indicated that the presence of TM7x inhibits the host's growth. The uninfected XH001 hosts in coculture and the XH001 monoculture grew at similar rates (0.011 ± 0.002 min−1), while infected hosts grew at a significantly slower rate (0.008 ± 0.002 min−1). These cocultures contained a majority of non-dividing XH001 host cells (88%), which also showed defects in septum formation and down-regulation of cell division genes. These results thus suggest that TM7x acts like a parasite that can chronically infect its host, inhibiting replication and benefitting from its reduced cell growth. 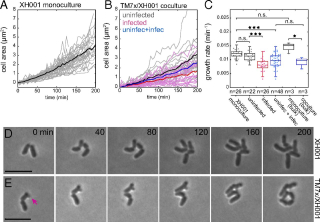 Figure 2.  Single-cell live imaging reveals XH001 growth and cell division. The cell areas of in­di­vi­dual XH001 cells in mono­cultures (A ) or cocultures (B ) were tracked during the live imaging. For the mono­culture (A ), 26 individual XH001 cells (gray traces) were tracked from six in­dep­endent experiments, and the average is shown in dark black trace. Each trace was fitted with exponential growth equation to determine growth rate and are summarized in (C). For coculture (B ), TM7x-uninfected (gray lines, n = 22) and TM7x-infected (pink lines, n = 26) hosts were tracked from seven independent experiments. The av­erage growth of uninfected (dark black), infected (dark red), or both (dark blue) are shown. Growth rates were determined and summarized in (C). (C ) Growth rate summary of single-cell or bulk cell growth measurements. Each dot reflects growth rate from each trace in A and B. Time-lapse images of monoculture (D ) and co­culture (E ) cells are shown with 40-min interval. (E ) TM7x-infected (arrow) and uninfected daughter cells divide dif­fer­ently. (Scale bars: 5 μm.) *P < 0.05, ***P < 0.0001; n.s., not significant. Source

To further study the TM7x–XH001 associa­tion, the authors isolated free-floating TM7x from a coculture. They used these cells to infect naïve host cells (XH001n), isolated from the same original source, but which did not harbor TM7x. These new cocultures were analyzed using various parameters to follow proliferation of host cells (OD, CFU) and to track TM7x cells (qPCR, irregular colony formation). In this case, there was an initial increment of TM7x cells accompanied by a decline of the naïve host population. However, the host then recovered (after 5 passages) and reached levels similar to those of the original coculture (TM7x- XH001).

How do these host XH001n cells recover after infection with TM7x and establish a more stable long-term association? When the genomes from naïve and TM7x-exposed XH001n cells were sequenced, 10 mutations that could be responsible for a reduced susceptibility to infection consistently appeared. Half of these mutations occurred in transporter genes, suggesting a role in limiting the resources provided by the host to TM7x cells. More importantly, these genetic changes are consistent with host evolution driven by the presence of a parasitic TM7x. Finally, coculture experiments done with TM7x and multiple host cells showed that of the cells tested, only Actinomyces species closely related to the original A. odontolyticus host formed stable associations with TM7x. Thus, these TM7x cells display a relatively narrow host range.

The capacity to grow TM7 in the lab, even though in coculture, revealed that N. lyticus establishes a stable, long-term parasitic relationship with its Actinomyces host that differs from the behavior of predatory bacteria or lytic phages. While these two quickly and efficiently kill their hosts, Saccharibacteria species appear to have evolved to persist in a community by forming stable infections with a bacterial host. By not killing the host quickly, the host can evolve and thus allow the emergence of a stable relationship. While these experiments still do not reveal major insights into the physiology of the one cultivated CPR members, they do provide a guide as to how one might investigate what life is like for the CPR. 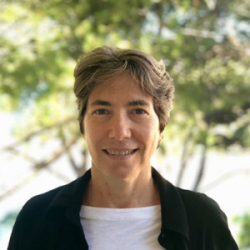