These tiny animals not only look like potato chips, they also pack a crunch when it comes to what's inside them.
—Nicole Dubilier

Take a few thousand small eukaryotic cells, allow for a few different cell types, and season them generously with endosymbionts (no, not mi­tochondria, they already have these!). Let the cells self-organize into a patty – or a potato chip, if you're more into a vegan lifestyle – with a dia­meter of ap­proximately 0.5–1.0 mm, and a mere 25 µm thick. Et voilà, you now have a minimal, an ani­mal of the most basic bauplan imaginable.

A Whiff of Zoology 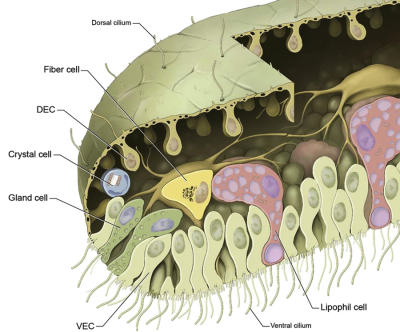 Figure 1. Trichoplax cell types and body plan. A thick ventral plate faces the sub­strate (below) and is com­posed of ventral epithelial cells (VEC; light yellow), each bearing a cilium and multiple micro­villi; lipophil cells (brownish) that contain large lipophilic inclusions, in­cluding a very large spherical inclusion near the ventral sur­face (la­vender); and gland cells (pale green), distin­gui­s­h­ed by their contents of secretory granules and prevalence near the margin. Dorsal epithelial cells (DEC; tan) form a roof across the top from which their cell bodies are suspended, surroun­ded by a fluid-filled space. In between the dor­sal epithelium and ventral plate are fiber cells with branching processes that contact each of the other cell types. A crystal cell (pale blue) con­tain­ing a bi­ref­ringent (=having two different refractive indices) crystal lies under the dorsal epi­thelium near the rim. Source. Frontis­piece: Trichoplax H2 eating (no scale given). Image credit Michael Hadfield, Uni­versity of Hawaii. Source

Your mini·mal comprises six different cell types (dedi­ca­ted stem cells are not yet known). It shows no signs of left/right sidedness as is typical for bilaterians, and thus lacks a de­tectable head or tail. No shell, no exo- or endo-skeleton, no neurons, no muscles, no mouth or anus, no digestive system. So, just two layers of epithelial cells, ventral and dorsal, the ventral layer dotted with gland cells, and with fiber cells in between the two layers (Fi­gure 1). Multicellularity with a tad more cell‑to‑cell ad­he­rence than you find in the Choanoflagellates when they form rosettes, or in the Amoebozoa when they form fruiting bodies, think Dic­tyo­stelium. Porifera (sponges), Cnidaria (corals, jellyfish) and Ctenophora (comb jellies) come to mind, and your patty from the phylum Pla­co­zoa (flat animals) competes with the former for the basal places of the animal branch (Metazoa) in the Tree of Life. A final judgement is pending, that is, hotly deba­ted among zoologists.

The name of your mini·mal is Trichoplax adhaerens, and it was first detected in 1883 in a seawater aquarium at the Zoological Institute in Graz, Austria, by German zoo­logist Franz E. Schulze. Its somewhat pompous-sound­ing name is the usual crude mix of ancient Greek with Latin, and translates to the more mundane "hairy platelet stick­ing to" ...glassy slides and pipettes used to handle it, that is. Its genome sequence was determined in 2008, which made the earlier (rather vague) assumption that Tricho­plax is the larval stage of an uniden­tified cnidarian obsolete. With a size of ~50 Mb (haploid), the Trichoplax genome is rather compact. Srivastava et al. identified 11,514 ORFs, or protein coding genes (yeast ~12 Mb, ~5,400 ORFs; E. coli ~4.5 Mb, ~4,250 ORFs). Almost 87% of the predicted Tri­choplax genes have detectable sequence similarity to genes from other animals. Analysis of the exon-in­tron structure of orthologous genes revealed a high degree of conservation in Trichoplax relative to eumetazoans – interestingly more conservation relative to mammals (H. sapiens) than to nematods (C. elegans) or arthropods (Drosophila). 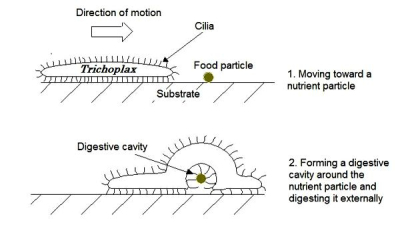 Trichoplax animals can swim propelled by their cilia but mostly slide smoothly across sur­faces at a speed of ~15 µm/s−1 when searching for food. This is comparable to the speed that human macrophages achieve while craw­ling through tissue, but rather slow when compared to the swimming speed of ~600 µm/s−1 of the champion, the bacterium Thiovo­lum majus. Like all animals T. ad­haerens is a heterotroph, and feeding experiments in the lab showed that it appreciates a mixed diet of Porphyri­dium cruentum, Rhodomonas salina, and Chlorella sp. algae. When they encounter food on any kind of surface – algal and bac­terial mats are a feast! – they slow down to ~5 µm/s−1. In slow mode, the animals stretch out and contract periodically, which allows them to harvest food (Figure 2). Harvesting here means that the ventral gland and epithelial cells secrete digestive enzymes, which decom­po­se the algae and/or bacteria, and absorb the released nutrients. Vicki Buchsbaum Pearse found that Trichoplax grows in the lab at 23°C and, when well fed, has a doubling time of 1–3. days.

How does Trichoplax coordinate its movement? We don't know exactly. However, Trichoplax cells secrete a number of small peptides, which act much like the neuropeptides used by neurons to communicate with each other (not to be confused with small-molecule neurotransmitters). These peptides are thought to trigger the behavior of individual cells within the patty, thus making the Trichoplax movement not unlike that of starlings murmuration.

How does Trichoplax reproduce? Sexual reproduction has not been observed in the lab yet. What is readily observed is reproduction by fission. An animal rips itself in two, with both parts going their separate ways without being particularly impressed by this traumatic(?) event. You can see this clearly in a superb video (start at 1:52) from the Prakash lab at Stanford University. An aside: you may have heard of the Foldscope or the Paperfuge from the same lab – they are obviously gifted tinkerers with a focus on creating affordable technologies for healthcare labs in develop­ing countries (as they are often called in a somewhat condescending manner).

In 1971, the German protistologist Karl G. Grell – a trained zoologist specializing in protozoa, and long-time editor of the journal Archiv für Pro­tistenkunde – published his observation of Rickettsia-like (endo)symbionts in the fiber cells of Trichoplax adhaerens. This initial observation was confir­med, or more precisely, the putative symbiont identified as a member of the Midichloria branch of the Rickettsiales (the latter the most likely source of the mitochondria in eukaryotes). Now, two international teams of researchers, one led by Kai Kamm, the other led by Harald Gruber-Vodicka and Nikolaus Leisch, took a closer look at Trichoplax and its symbionts. Both excellent studies come to largely the same conclu­sions, and would have deserved to be published back-to-back in the same journal. I will focus on the study of Gruber-Vodicka et al. I do this, not because it was published first and not because they were able to detect two endosymbionts. I choose it because the authors pin-down both en­dosymbionts to specific host cell types and cell compartments.

Gruber-Vodicka et al. found in metagenomes obtained from single Trichoplax H2 animals the 16S (mitochondrial, bacterial) and 18S (nuclear) rRNA-specific sequences of Trichoplax and, at high fre­quency, sequences that matched well with known 16S rRNA sequences of alphaproteo­bacteria from the family Midichloriaceae (Rickettsiales). A more detailed 16S rRNA analysis showed that the Trichoplax H2 midichlorian phylotype is contained within an unnamed lineage of sequences reco­vered from diverse invertebrate hosts and from subsurface sediment samples. Within this lineage, the sequences had pairwise identities of 98.4–99.4%, and were well separated from the lineage that contained the Trichoplax ad­haerens H1 RETA1 midichlorian phylotype. The authors recovered a high-quality 1.26 Mb MAG (metagenome-assembled genome) for the Tricho­plax H2 midichlorian phylotype. By phylogenomic analyses based on 43 conserved marker genes they are confident to have identified a new genus within the Midichloriaceae; they named the new species 'Ca. Grellia incantans' in honor of Karl G. Grell. 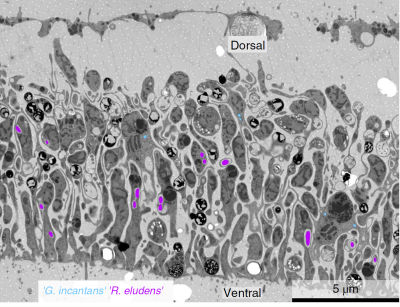 Gruber-Vodicka et al. adressed the physiology of G. in­can­tans and found that its genome en­codes the hallmark feature for intracellular energy parasites that is present in all Ric­kett­siales genomes: a fully functional ADP/ATP-translocase for importing ATP from its host. How­ever, no transcripts or respective peptides of the ADP/ATP-trans­locase were found in G. incantans. Instead, the bacterium generates ATP with an ATP synthase, and the subunits a and b were highly expressed in the G. incantans proteo­me. Compare the typical energy-parasitic lifestyle of cy­tosolic Rickettsiales that rely on ATP imported from their hosts, to the ability of G. incantans to synthesize ATP by itself, which may lower its detrimental impact on the host.

High transcription of key genes of the oxidative TCA cycle and the presence of a complete electron transport chain in the genome, with some of its subunits among the most highly expressed genes, suggests that the proton gradient for ATP synthesis is fueled by oxidative phosphorylation. An in­complete glycolysis pathway and several importers for α‑ketoacids and C4-dicarboxylates suggest that the metabolites respired in the TCA cycle are imported from the host. The genome and tran­scriptome of G. incantans revealed a strong host dependence on both amino acid and nucleotide supply. In contrast, the transcription profile suggested that it may supply its host with riboflavin (vitamin B2), a vitamin that cannot be synthesized by most metazoans.

The authors localized G. incantans exclusively in the fibre cells of Trichoplax by fluorescence in situ hybridization (FISH) and transmission electron microscopy (TEM). They calculated 2−20 symbiont cells per fibre cell, a very low number, too low to presume that it's a proliferating intracellular pa­tho­gen. The most intriguing finding, however, was the presence of G. incantans cells (thin and rod-shaped, size ≤1.2 × 0.30 μm) in the rough endoplasmatic reticulum (RER) of the fibre cells (RER is the part of the ER that is densely populated with ribosomes on the cytoplasmic side). Sym­bionts residing within the RER were first observed by Grell & Benwitz (1971) in other Trichoplax lineages, but it is known, for example that the intracellular human pathogens Brucella and Legionella, and also the amoebal midichloriacean parasite 'Ca. Jidaibacter' remodel the surface of the phagoso­mes in which they reside such that they become covered by host ribosomes as an effective stra­tegy for avoiding digestion by their hosts. To determine whether the structures surrounding the symbiont cells were remodelled phagosomes or RER they used high-resolution 3D TEM tomo­gra­phy. This revealed that the ribosome-covered membranes, in which G. incantans reside, form net­works that are connected to the nuclear envelope, indicating that these structure are in fact RER (see here).

In an earlier STC post, I had called the Rickettsia/Pela­gi­bacter/Wolbachia clade of the Alphapro­teo­bacteria a Pandora's box when it comes to strategies for intracellular survival and propagation in eukaryotes: no cellular compartment or organelle seems to be safe from occupation by at least one of them. Grellia incantans now adds the RER to the growing, almost complete list.

Note: the 'Symbiont #2' part and the remainder of the article will go online next Thursday.