The first part was about Trichoplax, and about one of its symbionts, Grellia incantans. Now it's about the second...

When searching the metagenomes obtained from single Trichoplax H2 individuals for 16S and 18S rRNA-specific sequences, Gruber-Vodicka et al. found, next to the prevalent Trichoplax and Grellia sequences (see part I), a third sequence at high frequency that matched well with known 16S rRNA sequences from the Marinamargulisbacteria (ZB3), a branch within the phylum Margu­lis­bacteria that comprises in addition the WOR-1 and GWF2-35-9 branches (you can spot WOR-1 in the Hug et al. (2016) tree as branching-off from the Cyanobacteria/Melainibacteria group). 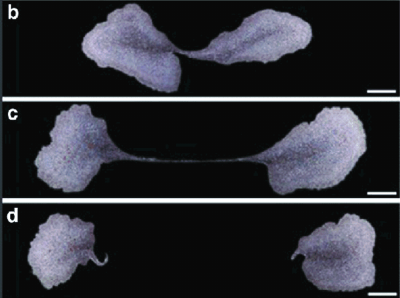 The authors assembled a nearly complete genome of this bacterium (>25 contigs, ~1.5 Mb genome size, average GC-content 37.2%, 1,356 ORFs). As it has so far only been cultivated by its Trichoplax H2 host and not in the lab, its name has to carry the 'Candidatus' pre­fix. So its official ID is 'Ca. Ruthmannia eludens'. A similar situation exists for the Saccharibacte­ri­um 'Ca. Nanosynbacter lyticus' TM7x that can only be grown in coculture with A. odontolyticus XH001 (see the recent post by Mechas Zambrano and Roberto). For the record: with the de­tection of R. eludens as intracellular symbiont of Trichoplax, Margulisbacteria is the se­venth bacterial phy­lum with intracellular symbionts of animals (the other six being Alphapro­teo­bacteria, Epsilonbac­teraeota (formerly Epsilonpro­teo­bacteria), Gammaproteobacteria, Teneri­cu­tes, Planctomycetes-Chlamydiae-Verrucomicrobia (PVC), and Cyanobacteria).

An aside: I could easily spot the replication origin, oriC, of R. eludens in the 228 bp-long dnaA-dnaN in­tergenic region, including a twin-R1 type DnaA box" and the DnaA-trio motif (a twin-R1 type DnaA box is a hallmark of predicted cyanobacterial oriCs). This indicates that R. eludens re­plicates its chromosome in a DnaA-dependent fashion, like most bacteria. 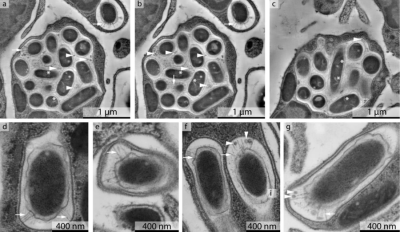 Gruber‑Vodicka et al. addressed the physiology of R. elu­dens by an all-three-omics approach, that is, they ex­trac­ted all DNA, mRNA, and proteins from single (DNA, RNA) or a small num­ber of pooled animals (protein), se­quenc­ed everything, and assig­ned peptide and mRNA sequenc­es quanti­ta­ti­ve­ly to the reference genomes of Trichoplax and both sym­bionts. Knowing which genes were actively transcribed and which proteins were actually made al­lowed them to model the physiology of the complete symbiosis at the time of samp­ling (see a diagram of the metabolic path­ways present in R. eludens and G. incan­tans here).

According to their modeling, R. eludens is an aerobic che­moorganoheterotroph, with a com­plete tricarboxylic acid (TCA) cycle that generates energy and biomass from gly­ce­rol and the β-oxidation of fatty acids. The R. eludens genome encodes lipases (enzymes that hydrolyze lipids to glycerol and fatty acids) that would allow it to digest lipids but they found neither transcripts nor peptides for such symbiont lipases. In contrast, Trichoplax H2 expressed se­veral lipases, most probably for the digestion of the algae it feeds on, suggesting that R. elu­dens relies on the lipases expressed by its host.

R. eludens encodes genes for the synthesis of all amino acids, including the nine considered es­sen­tial for animals. However, its genome does not encode amino acid exporters. Gruber-Vodicka et al. did not see intracellular lysosomal digestion of the symbiont in the epithelial cells. They as­sume, therefore, that the host takes up OMVs produced by R. eludens via phagocytosis and thus supplements its diet (Elio mentioned this type of "feeding of the host via OMVs" in the Paracate­nula–Riegeria symbiosis). The benefits of such putative amino acid provisioning by Ruthmannia are not clear as the animal's algal diet should contain sufficient amounts of essential amino acids. Perhaps the symbiont is useful as a stockpile when Trichoplax is on the move in search of food?

Grellia incantans, the endosymbiont introduced in part I, and Ruthmannia eludens inhabit dif­fer­ent cell types in their Trichoplax H2 host and appear perfectly well adapted (integration with host metabolism, moderate proliferation). Thus, it is not surprising that Gruber‑Vodicka et al. found both symbionts faithfully transmitted in the Trichoplax H2 lineage; all animals tested at different time intervals always contained both symbionts in comparable numbers. Yet, surpri­sin­gly, neither symbiont was found in the Trichoplax H1 lineage, which separated only a few de­cades ago from the H2 lineage (both haplotypes differ detectably in their mitochondrial DNA, and also in their genomes).

Ruthmannia eludens was not detected in the H1 lineage and no other relative from the Marina­mar­gulisbacteria either (R. eludens sequences were also not found by screening the SRA database for metagenomic samples from various aquatic habitats). So, was it a one hit wonder to find R. eludens in the Trichoplax spp. H2 "Hawaii" lineage? Did *anyone* check the Trichoplax spp. H2 "Pa­nama" lineage that was studied by Kamm et al. (2019) for the presence of R. eludens or of an­other second symbiont? (the type of question you get on twitter.)

The situation is no less tricky for the Grellia incantans endosymbiont. Stable in the Trichoplax H2 "Hawaii" lineage but not found in the H1 lineage, which harbors (as replacement?) another Midi­chlo­riaceae bacterium, similar to the RETA1 phylotype present in Trichoplax adhaerens. Also, the Trichoplax H2 "Panama" lineage is devoid of Grellia but harbors a Midichloriaceae bacterium more closely related to the RETA1 phylotype.

How and where to draw a line in this game of musical chairs? First, Grellia incantans and the Mi­dichloriaceae bacteria are closely related, at ap­proximately the same level as E. coli and Salmo­nel­la. Kamm et al. (2019) assume that the small differences in their respective gene repertoires ulti­mately determine which of the two symbionts is preferred by their Trichoplax host in certain envi­ronments. Second, all partners of this com­pany are likely adapted to this musical chairs game through previous encounters. So, unlike an emergent symbiosis or an evolutionary stable sym­biosis, this comes close to a meta-symbiosis, in which the eukaryotic and bacterial partners can be constantly replaced by close relatives, because they're already acquainted with the family (I hesi­tate to introduce a new term like meta-symbiosis, but this might be temporarily per­mitted in a blog).

In a Nature short communication, Harald Gruber-Vodicka revealed a fun fact that I definitely have to pass on:"We had to travel halfway around the globe to find Trichoplax [in Hawaii]. However, once we learned how to spot Trichoplax, we recovered the same species with the same two sym­bionts in the marine coral aquarium in the entrance hall of our institute in Bremen." If there ever was a clear case of everything is every­where... . And it didn't stop here! They found Grellia sp. se­quences in metagenomic samples of virtually all aquatic habitats all over the globe in the SRA da­tabase. Quoting from Gruber-Vodicka et al. again:"Where do these Grellia live – in other hosts or are they free-living? Is their intra-ER lifestyle more common than we thought?" Nicole Dubilier, co-author of the Gruber-Vodicka et al. study, added not as a warning but in joyful an­ticipation:"...at least 20 more [Trichoplax] species have been described, and our first results indicate that each host species has its own, very spe­cific set of symbionts." Maybe she had the proverbial German expression in mind: «...einen Sack voller Flöhe hüten» (guarding a bag of fleas) ?