A Bacterial Protein Takes on "Birds of a Feather Flock Together"

For a bacterium, sticking onto things is the go-to way to play it safe. The ability of bacteria to ad­here to surfaces is a major boon to their survival, enabling them to colonize and form communi­ties in diverse environments ranging from deep sea vents to steel piping to animals' teeth. In ma­ny instances, sticking onto surfaces facilitates nutrient uptake, growth, protection, and patho­ge­ni­ci­ty, so it makes sense for bacteria to invest energy into producing tools to do so. 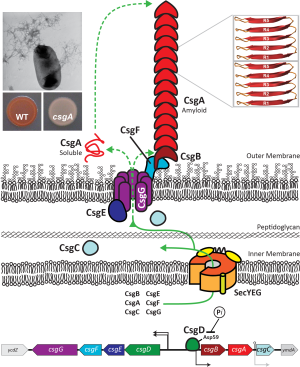 To interact with surfaces bacteria have a "sticky toolkit" that includes extracellular polymeric substances and sur­face organelles such as pili with adhesins. Enterobac­te­ria­ceae such as E. coli also produce curli, protein fibers that comprise much of the extracellular matrix and are handy for making biofilms (Fig. 1). The curli CsgA subunit is an interesting protein because it is able to form fibrillar aggregates or amyloids. Thus, CsgA is similar to human proteins such as α-synuclein (αSyn), amyloid beta (Aβ), prion protein (PrP) and Tau, which have been associated with a number of human neurodegenerative diseases. Once some of these proteins begin to form amyloid ag­gregates, they can accelerate the formation of aggregates of non-identical proteins. It might be fair game to cross-aggregate non-identical proteins from the same organ­ism, but could bacterial amyloids also accelerate the ag­gre­gation of human proteins into amyloids?

For all the ruckus about the gut microbiome as the culprit for everything under the sun, ranging from autism to ath­le­ticism, there seem to be few studies that delve into mechanisms at the level of microbe-host mo­lecular interactions. A recent study by Sampson et al., "A gut bacterial amyloid promotes α-synuc­lein aggregation and motor impairment in mice," is one attempt to gain some mechanistic insight into how gut microbiota may be involved in neurodegenerative diseases. Taking a step forward from their previous 2016 paper, they begin to delve into the connection to microbes residing in the gut in mice models.

It's well-established that brain-wide aggregation and accumulation of αSyn, a protein found at the presynaptic terminals of neurons, can contribute to neurodegenerative diseases. These synucle­inopathies, which include Parkinson’s disease, Lewy Body disease, and Multiple System Atrophy, involve misfolded αSyn propagating its misfolded state to other αSyn, leading to the formation of amyloid aggregates. The previous 2016 study by Sampson et al. reported that depleting the gut microbiota of αSyn-overexpressing (ASO) mice diminished markers of synucleinopathy such as motor impairment. This suggested that there was a microbial component contributing to disease in mice. To winnow out potentially responsible bacteria, they mono-colonized ASO mice with E. co­li, B. fragilis, and segmented filamentous bacteria. Only E. coli, which produces curli, led to motor impairment. Comparing mice colonized with wild-type E. coli versus a ΔcsgBAC mutant (an E. coli unable to make curli) confirmed that it was indeed curli, and not simply the presence of E. coli, that was stirring up trouble. The mice colonized with curli-producing E. coli also displayed higher levels of αSyn fibrils throughout the brain, duodenum, and large intestine and increased expres­sion of proinflammatory cytokines in the brain.

This all suggested that curli fibers from E. coli in the gut were contributing to synucleinopathy in these mono-colonized ASO mice. But what about mice with more complex microbiomes closer to that of a human? The authors then repeated these experiments in ASO mice doing a fecal trans­plan­tation using single human donor. Importantly, the microbiome of the feces used was pre­dict­ed to contain only low levels of csgA. This allowed the investigators to supplement the fecal trans­plant with either wild-type E. coli or a ΔcsgBAC mutant, and again, they observed synucleinopathy markers only when E. coli producing curli were present. 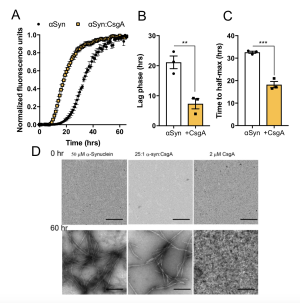 Figure 2. A figure from the paper demon­stra­ting acceleration of αSyn aggregation by CsgA monomers. A, B, and C depict the decreased lag phase and time required to reach half-maxi­mum aggregation in the presence of CsgA, and D is a set of TEM images for αSyn alone, CsgA alone, and αSyn+ CsgA. Source

To complement the mice experiments, the authors as­sayed curli fiber interactions with αSyn in vitro. They found that adding monomeric CsgA to αSyn accelerated the formation of αSyn aggregates, which could them­selves seed further aggregation (Fig. 2). CsgASlowGo, a form of CsgA that is nonamyloidogenic due to mutated critical Gln/Asn residues, was not able to accelerate αSyn aggregation. In addition, mice mono-colonized with E. coli expressing CsgASlowGo did not cause as severe motor im­pairments. So, the aggregation ability of CsgA is critical.

Strangely, however, the authors could not detect any in­teraction between purified CsgA and αSyn monomers even via surface plasmon resonance (SPR). SPR involves adsorbing one interacting partner onto the surface of a chip, flowing the other across it, and then monitoring for changes in the reflection of light. If there is an interact­ion, the refractive index of the surface changes and this can be monitored along time. SPR is thus a highly sensi­tive technique that can monitor even transient interact­ions between low concentrations of a pair of molecules in real-time. This makes the lack of detect­ed interaction particularly unexpected, especially in light of the finding that mutated aggregation residues of CsgA abolished acceleration of αSyn aggregation. Perhaps prior oligomerization is re­quired for their interaction, as the authors propose, or perhaps there is an unidentified additional molecule that mediates their interaction. In any case, something interesting is afoot here and de­serves closer scrutiny.

Bringing back Barry Marshall and his delectable H. pylori cocktail, a bold moment that led to the discovery of the link between the bacterium and gastric cancer − we can wonder whether amyloi­do­genic proteins from H. pylori can contribute to human protein amyloid formation as in the cu­ri­ous case of CsgA and αSyn. There is some precedent for inter-species protein aggregation, albeit not inter-kingdom, as in the case of yeast Sup35NM forming inheritable aggregates in mouse neu­roblastoma cell lines.

In any case, there are plenty of exciting developments possible from exploring and manipulating bacterial amyloid proteins like curli, ranging from improved understanding of human diseases to new treatment strategies. For example, shifting essential bacterial protein equilibria towards ag­gre­gation via short homologous peptides have been found to be bactericidal to clinical isolates, and, cleverly, non-specificity of the antibiotic peptides for any one protein makes it difficult for bac­­teria to develop resistance. Aggregating protein drugs for humans as bacterial inclusion bodies is also an emerging drug delivery platform. There's a lot to gain from probing the dynamics of bacterial amyloid formation and then designing therapeutics to alter their equilibria − taking a peek into how microbial birds of a feather flock together.