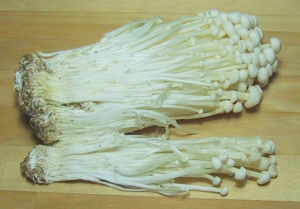 You most likely have eaten enoki mushrooms in a Japan­ese soup or a salad. You may have wondered about them, looking as they do as thin whitish noodles with a small cap at the end. Are they actually mushrooms or some strange kind of pasta? You would be even more startled if you saw the same species growing outdoors on a dead elm in the middle of the winter. Called the Winter Mushroom, on the elm, it looks like a regular mushroom, with a brown cap and a stem that grows out of a dark base, which gives it its name, Flammulina velutipes (the 'velvet-footed little flame', see frontispiece). To make enoki look like the white thin elongated threads you buy in the store, it is cultivated in the dark and at a high CO2 concentration (see movie here). A fine example of how environmental conditions dictate shape and form! But this is true for earthly conditions only. Sent aloft on the Space Shuttle Columbia, enokis got confused and grew haphazardly at various angles. Enokis are cultivated on a large industrial scale, thus there is considerable interest in the biology of their de­velopment. A recent paper by researchers at the State Key Laboratory of Mycology, Chinese Academy of Sci­en­ces in Beijing and others announces the discovery of a transcription factor that determines both the develop­­ment and the yield of enoki. Called PDD1, this factor increases during fruiting body ('basidioma' technical for 'mushroom') development. Shutting down the expression of the pertinent gene by RNA interference inhibited the formation of primordia, the first step in mushroom de­velopment. On the other hand, its overproduction pro­moted it. Increasing transcription of pdd1 5-fold short­ened mushroom cultivation time by four days (9.8%) and increased the yield by some 33% (enoki growers rejoice!). The gene for PDD is common among the Basidiomycetes, such as the cultivated white buttons, oysters, shiitake, and even pathogens such as Crypto­coc­cus. Transcrip­tio­nal regulation of mushroom development is not unique here, as other transcription factors with analogous functions have been implicated in model species like Schizophyllum commune and Coprinopsis cinerea.

What does PDD1 do? RNA sequencing (RNA-seq) analysis showed that when pdd1 is silenced, 331 genes become downregulated and 463 are upregulated, ergo PDD1 is indeed an important transcription factor. Not surprisingly, among the genes that are regulated by PDD1 are several involved in mushroom development. But this process is far from simple, as other transcription factors are also involved.

As the authors said: "PDD1 is the first identified transcription factor with defined functions in mushroom development among commercially cultivated mushroom species, and it might be useful in mushroom breeding."