Like many others, I am having trouble focusing on work these days. I admit it, I've had difficulties sitting down to write this post; the mind keeps wandering off, imagining the likely scenarios of the coming months. After all, we are in the midst of the COVID-19 pandemic. In an effort to overcome my anxiety, I find solace in thinking that, truly, I am quite fortunate. My home is located in central Colombia, some 2600 meters (8600 ft) above sea level, in the midst of a small patch of preserved Andean forest. These forests are well-known for their high humidity, foggy mornings and, though threatened, high biodiversity. I am fortunate because, since I built my house two years ago, I have noticed a large increase in the local population of frogs. I balance the surprise of sometimes find­ing them as companions in my morning shower with the joy of listening to their songs every eve­ning as I fall asleep. What makes me feel so very fortunate is the privilege of having a growing po­pulation of frogs in my backyard. Why is that? You probably know that frog po­pulations, along with those of other amphibians, suffered catastrophic declines during the last seven decades. The fact that I continually hear and see frogs is an indication that, at least in some places, these popu­lations are making a comeback. I consider it a small miracle to be lulled to sleep by their lovely se­renades. 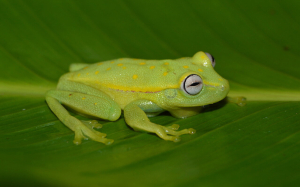 Figure 1. A Hypsiboas punctatus frog from the lowland Peruvian Amazon, one of the species found to be infected with chytrid fungus. Credit: Consuelo Alarcón Rodri­guez. Source

For many years, herpetologists around the world had no­ticed amphibian populations declined but the evidence re­mained largely anecdotal. It was not until the end of the last century that a quantitative assessment con­firmed the negative population trends. This pretty much co­in­cid­ed with the identification of the disease – chytri­diomy­cos­is – causing widespread amphibian mortality in Australia and Central America. Thus a fungal pathogen, a member of the phylum Chytridiomycota (informally cal­led chytrid fungi), came to occupy center stage in the studies of am­phibian demise. [The word Chytridiomycota derives from the Greek word chytridion, meaning "little pot," in refer­ence to the structure that houses the fla­gel­lated motile zoospores of these fungi.] The causative agent of amphibian chytridiomycosis is Ba­tra­chochytrium dendrobatidis. Lovely name indeed (click on the species link if interested on its etymology) but, like many others, I will refer to it simply as "Bd." The story of Bd as a terrifying pa­thogen had not escaped STC's attention. Six years ago, Gemma Reguera described Bd as "The Fun­gus That Killed Darwin's Frog." I felt it was time for an update, as much has been learned about this fungus and the disease since then. A very recent review covers the subject extremely well and makes for ex­tre­mely good reading these days. 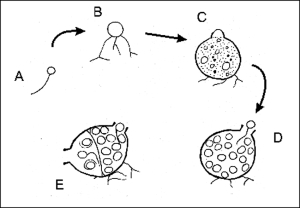 Figure 2. Batrachochytrium dendrobatidis. Dia­gram of the life cycle in culture. After a period of motility (usually < 24 h), zo­ospores encyst, re­sorb their flagella and form germ­lings. Rhi­zoids ap­pear from one or more areas. The thalli grow larger and become mature sporangia over 4 to 5 d. Contents of the enlarged thallus become multinucleate by mitotic divisions and the en­ti­re contents cleave into zoospores while the dis­charge tubes form. The dis­charge tube is closed by a plug that absorbs water and deliquesces when zoospores are ready to release. Some thalli develop colonially with thin septa dividing the contents into multiple spor­angia each with their own discharge tube. A = zoospore, B = germling, C = developing zoosporangium, D = monocentric zo­ospor­angium, E = colonial thallus. Source

Bd's lifecycle involves the settling of a motile spore through the formation of rhizoids to help attachment. In a matter of days, the "little pot" forms and therein new zoospores develop that are eventually released. In cul­ture there are, of course, no major consequences. But problems can arise when the zoospores invade and settle on frogs' skin. Infection can have varied outcomes depending on a number of genetic and environmental factors. I felt a bit of a chill when I read, in the review cit­ed above, that infection "is a remarkably complex pro­cess that can have markedly different outcomes, ranging from mild or no symptoms to death." Sounded so famil­iar, and I wondered if the age and any underlying chronic disease of each frog influenced the outcome. Compa­ra­ti­ve genomics between Bd and saprophytic Chytridio­my­co­ta revealed some differences suggesting that certain se­creted proteins might be virulence factors. Specifically, Bd encodes and produces a greater number and increas­ed amounts of metalloproteases of the fungalysin family. The end result is that Bd has evolved into an effective pa­thogen.

This pathogen is responsible for what is perhaps the largest panzootic (the word for a pandemic involving an animal disease) in history. Bd has an extremely broad host range. It infects "50% of tested frog species (order Anura), 55% of salamander and newt species (clade Caudata) and 29% of caecilian species (Gymnophiona)." And it is broadly distributed such that is has been found in 3,705 of 9,503 field sites tested (39%). Its effects have been devastating. In the authors' words: "Chytridiomycosis has contributed to the decline of at least 501 species (6.5% of all amphibian species), leading to 90 presumed extinctions and decreases in abundance exceeding 90% in another 124 species." It's no wonder Ed Yong dubbed Bd the "doomsday fungus" in an article in The Atlantic. 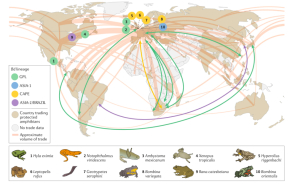 Figure 3. Global spread of Batra­cho­chy­trium de­n­dro­batidis and the amphibian trade. In­ter­continental movements of B. dendrobatidis (Bd) have been inferred from the genome sequen­ces of geo­graph­ically separated isolates that form closely related phylogenetic clades, with high bootstrap support (≥90%). Num­bers show where isolates of Bd have been recovered from traded amphibians, with pictures of the species involved shown at the bottom of the figure. Al­so shown are the movements of traded, CITES-listed am­phib­ians, showing the global connec­tivity of the am­phibian trade, which involved over 15 million specimens during the period 2000–2010. Data are from TRAFFIC (a global network that monitors wildlife trade). Source

Where did this pathogen come from? Initially, investi­ga­tors proposed two competing arguments. On the one side was the 'novel pathogen hypothesis' (NPH) which stated that chytridiomycosis emerged at various loca­tions after it had been seeded by intercontinental trade routes into naive ecosystems. On the other side was the argument known as the 'endemic pathogen hypothesis' (EPH), stating that Bd was a widespread endemic com­men­sal of amphibians that became more virulent as a result of global environmental change. Through com­pa­ra­tive genomics and other analyses, it now seems that Bd emerged in Asia. There, it appears to have been infecting amphibians for millions of years. As such there has been ample time for the evolution of stable host–pathogen dy­namics. How did the pathogen become so widespread? All of the evidence points at the international amphibian trade that was greatly accelerated throughout the twen­tieth century (Figure 3). Lending additional support to these conclusions, in 2010 a second species of Chytri­dio­mycota, Batrachochytrium salamandrivorans (Bsal) of Asian origin, caused the local extinction of fire sala­man­ders in the Netherlands.

What does the future hold for the amphibians? Research in multiple disciplines suggests there might be ways to mitigate the global effects of chytridiomycosis. A promising avenue is the re­cog­nition that interactions between commensal fungi and bacteria of the amphibian skin microbiota may limit the disease. But science alone will certainly not do the trick, it will require the mutual work of scientists and policy makers. In the words of the authors: "It is heartening to see that ra­pid policy measures enacted following scientific advances are on the rise, now that the con­se­quen­ces of failing to prevent batrachochytrid introductions are more widely realized. Although we believe that research will eventually yield the means to mitigate the emergence of wildlife dis­eases, for research to have its full impact, reinforcing the links between science, policy and the public will be key to success." How timely a message for human diseases as well. And so, I hope you will understand why these days I find solace in the singing of the frogs.

[Please note: After this article posted, Max Lambert (@MaxRLambert) brought to my attention two Technical Comments that appeared in Science on March 20, 2020 (see here and here) showing that the results indicating the extent of amphibian decline are controversial. –Roberto]