Merry joined me almost at very inception of this blog. She modestly offered to proofread the ma­terial. Although she had a background in science (Ph.D. from Johns Hopkins, long ago), she had given it up in favor of an unconventional life. But, luck would have it, shortly before she contacted me, she had bought a microbiology textbook, which she read from cover to cover. From this un­usu­al beginning began a career in and out of the blog. Meanwhile, we became partners. All this culminated in her becoming a true expert in phage biology. She was helped by San Diego State’s Forest Rohwer, with whom she wrote two fine books. With this experience at hand, she wrote a book on her own, Thinking Like a Phage, her chef d'oeuvre, a truly remarkable paean to her fa­vorite biological entities. Reading it is a genuine treat. The development of Merry from essentially ground zero to becoming a recognized world expert is well nigh incredible. Having watch it hap­pen has been one of my great joys. In the intervening years, we became close friends. I will miss her sorely.

We (the other STC bloggers) didn't work as closely with Merry as Elio did, at least not for as long. But we have all benefited from her extraordinary skills as an editor. To thank her, we would like to let her speak for herself one last time:

On the first day of February, 2007, I googled "Euplotidium." One of the top hits was Small Things Considered: Ciliate 007. One click and I landed on Elio's blog. 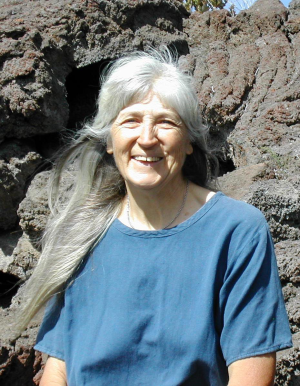 I knew immediately that we shared an appreciation for The Small Things. I wanted to help spread that message. Beginning with his first e-mail, Elio graciously welcomed me and allowed me to make myself useful to the blog in increasingly varied and challenging ways. Before I knew it, I was ensconced on the banner as co-blogger. I still marvel at my good fortune. Seldom does one have the pleasure of such a nourishing work relationship, or en­counter a generous teacher with whom to learn about both microbiology and writing.

I was educated as a research biologist in an earlier era, taught college briefly, then spent thirty-some years in other worlds. During those decades, I created and ran a natural foods restaurant, then a bookstore. Later I wor­ked as an editor, as a desktop-publisher, and as a tech­ni­cal writer preparing software manuals. Finally I returned to my first love, biology – especially the microbes in all their creative diversity.

The Big Island of Hawaii has been home for me since 1984. In 2002 I moved into my small, owner-built house in a lava field at 4000' on Mauna Loa, off grid, with broadband Internet, a cat, a wood­stove, and a year-round vegetable garden. Ten years later, dealing with post-polio syndrome, I moved about a hundred feet across the lava to a new, even smaller and much less physically de­manding house that I call The Nutshell. The garden too, has assumed smaller dimensions but still it feeds me. The days have shrunk along with my supply of physical energy. It has become im­pos­sible to fit in everything I would like to do. Thus, I resigned as co-blogger as of August 31, 2012, to become STC’s first Blogger Emerita. I have continued writing some posts and doing a little editing for Elio. The years 2013-14 were consumed by editing, writing, and publishing an exciting phage book with Forest Rohwer (Life in Our Phage World). With that project completed, I then devoted most of my hours-days-months to writing a a book of my own about my beloved phage – my way of continuing to speak for The Small Things.

Thinking Like a Phage was published May 1, 2017. Mission accomplished! However, post-polio is­sues were not completed, but instead have continued to grow. I have moved again, this time to a cottage beside the home of friends who are giving me the assistance I routinely need. My phage writing has come to a conclusion. Meanwhile, the 1031 phage carry on. Long live the phage!