We often talk sloppily of «algae» or «protists» on these pages when we consider, rarely enough, uni­cellular eukaryotes. For my part, I attach little importance to biological systematics or taxo­no­my per se because I'm more interested in learning how living beings go about their business than in sorting them into various drawers. Therefore I mostly confine myself to the names of the small things as they were baptized according to Linnaeus's binomial nomenclature, and mention their systematic/taxonomic affiliation, the labels on the drawers, in brackets.

Yet occasionally I stumble over and into biological systematics, most recently over a diagram in the Wikipedia entry for Protozoa, and shown here as figure. It's an illustration, a separately color‑prin­t­ed Plate III, of an article titled "On the distinctions of a plant and an animal and on a fourth king­dom of Nature" by the British lawyer and naturalist John Hogg (1800–1869). The article was pub­lished 160 years ago in the (now defunct) quarterly The Edinburgh New Philosophical Jour­nal. Al­though lawyer by profession and not an academic, John Hogg, MA (Cantab), was a renowned sci­entist: fellow of the venerable Linnean Society (founded in 1788) and admitted to the Royal Society in 1839, the same year as Charles Darwin, who was then 30 years old and just 3 years back from his five-year voyage with the «HMS Beagle». Probably more of a coincidence, Hogg's article with the dia­gram was published in 1860 while Charles Darwin's On the Origin of Species was published the year before (I mention this to briefly outline the scientific context in which John Hogg's work should be considered.) 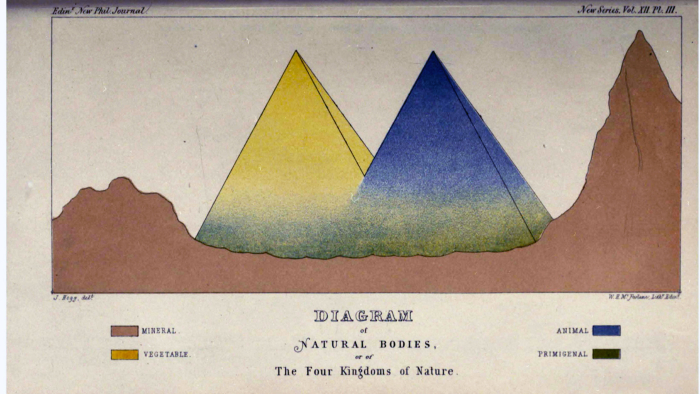 (Click to enlarge)
John Hogg's illustration of the Four Kingdoms of Nature, showing "Primigenal", consisting of the protozoa and protophyta (Protoctista), as a greenish haze at the base of the Ani­mals and Plants, 1860. Source

John Hogg drew the diagram himself (del t.) and the lithographer W.H. McFarlane (Lith r.) from Ed­inburgh (Edin r.) prepared print template.1) Hogg was certainly not an accomplished artist, but was very careful to portray his abstract thoughts accurately. Take the colors: the three primary colors for painting, blue, yellow, and red – well, in the print it's more a hue of auburn – represent Lin­nae­us's three kingdoms, Regnum Animale (Animalia), Regnum Vegetabile (Plantae) and Reg­num La­pi­deum (Lapides), respectively. Green is the color you get when mixing yellow with blue, figuratively mixing plant with animal characteristics as in the Protoctista, the Regnum Primigenum – and green is the complementary color to red. Perfect.

The choice of the pyramid shape – with lightly indicated three-dimensionality yet without shadows – for the Regnum Animale and the Regnum Vegetabile is a bow to the strictly hierarchical system of Linnaeus. A marginal note: I fail to understand why the Regnum Lapideum had to receive a ra­ther derogatory treatment, with a crumpled pyramid on the right, and on the left an almost com­ple­tely eroded one. More important, however, is that the chosen pyramid shapes for the Regnum Animale and Regnum Vegetabile inevitably gave the Regnum Primigenum ample space at their bases. And this came in handy since Hogg's aim with introducing the Regnum Primigenum as a fourth kindom was to "prevent[s] the unnecessary trouble of contending about their supposed natures, and of uselessly trying to distinguish the Protozoa from the Protophyta." For this was a particularly paralyzing legacy of Linnaeus's system: small unicellular organisms – cell theory was generally accepted in the middle of the 19th century – were catalogued and studied by zoologists in their department as Protozoa (primitive animals), and as Protophyta (primitive plants) by the botanists in their realm.

Hogg's pyramids today seem somewhat peculiar, even funny, because they in no way take into ac­count a genealogy of organisms, but only consider levels of plants and animals that build on each other and are, consecutively, ever more highly developed. That's the Linnean heritage and that genealogy is a far better guideline to sort and group organisms became obvious with the famous single illustration in Darwin's Origin of Species. A couple of years later, in 1866, Ernst Haeckel (18­34–1919) drew his Monophyletischer Stambaum der Organismen, in which he allowed a common descent for Animalia, Plantae and Protista (with 'Moneres', that is, Bacteria as the root). Haeckel's Protista were almost identical with Hogg's Protoctista, but despite a (by now) rather boring aca­de­mic debate – nicely recorded by Scamardella – the term Protista, or protists for short, finally stuck, not least because it is easier to pronounce and can be written with fewer spelling mistakes.

Hogg shows by the slightly crumpled but cleanly drawn line in the diagram, which separates the Regnum Lapideum (Mineral) from the Regnum Primigenum (Primigenal), that he had abandoned the doctrine of spontaneous generation. This seems rather trivial from today's perspective, but in his time it was «cutting edge». Remember that it was a widely held belief since Aristotle (384–322 BC) that living creatures could arise from non-living matter – dust, dirt, rotting meat or decaying plant material – and that such processes are commonplace and regular. It took biological ex­pe­ri­ments (with proper controls!) by the Italian naturalists Francesco Redi (1626–1697) and Lazzaro Spallanzani (1729–1799) to shatter this belief, and the famous 'swan neck flask' experiments per­formed by Louis Pasteur (1822–1895) in the 1850s to finally disprove spontaneous generation (in fact, the story was a bit more complicated and not as consistent as told here for brevity's sake.) Hogg was most certainly aware of Pasteur's work when he published in 1860 his article with the diagram.

But maybe it wasn't such a great idea to draw this clearly dividing line after all? From a different, less systematics-obsessed perspective, a clear separation of the Regnum Lapideum (Mineral) from the Regnum Primigenum (Primigenal) would be hard to maintain today. We now know of or­gan­isms that eat and breath rocks, the chemolithotrophs, all of them Bacteria or Archaea that would belong to the Protoctista if Hogg had already known about them (and not just seen small nucleus-less but cell-like objects of questionable provenience in his microscope).

I haven't studied the Deep Carbon book that was published last year to any depth yet (yes, a pun, btw: the book is Open Access). There's one message I took from it, though: No matter how deep you dig into the Regnum Lapideum (lithosphere), you always find traces of life, active life. But in some samples it is analytically challenging (translate: impossible) to reliably distinguish between a biological origin of certain carbon compounds and their origin from geochemical processes.2) So, no, this is not a covert attempt to revive the 'spontaneous generation' doctrine, not at all. But a hint that cleanly drawn dividing lines in diagrams are often somewhat blurred in real life. Yet I drift off topic... and would now like to leave it up to you to consider this somewhat antiquated diagram by John Hogg. In the meantime, I will contemplate what quirks future generations of biologists in, say, 160 years, might see in the (digital) diagrams we produce today.

1) I had to learn from Appendix 3 of Ad Stijnman's book Engraving and Etching 1400–2000 to decipher these abbreviations.