Teachers Corner: Who bears the load? 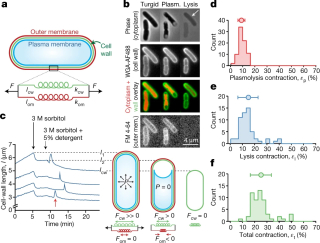 First, let me comment on the title I wrote. It should have read, what bears the load? Better yet, what part of the bacterial cell envelope is the load-bearing component? Whenever I taught bacterial cell biology I always started by describing the components of cell envelope, cytoplasmic membrane, cell wall and, in the Gram-negatives, the outer membrane. Then I would invariably pronounce that the cell wall, with its remarkable mesh of covalently linked glycan strands and peptide crosslinks, was the rigid load-bearing envelope component. Just looking at the structure suggested it was a stiff molecule able to bear the mechanical stresses that a bacterium might encounter in its changing environments. Right? Well, not quite… Apparently, for Gram-negatives, the outer membrane is a very important load-bearing component of the cell envelope. That is the finding that was reported in 2018 in a paper whose first author is Enrique Rojas, who worked with Julie Theriot and K.C. Huang at Stanford and is now in the faculty at NYU. The paper presents the results of a collaboration that involved not only those labs but also groups at UCSF and Madison. Overall, I found the results quite compelling and they certainly changed the way I view the stiffness of the Gram-negative cell envelope.