« Processing the Ps in Times of Stress | Main | Three to Tango »

The world has come a long way in understanding and probing the human microbiome in recent years, thanks to transformative new technologies like high-throughput sequencing. Research on the microbiome, particularly the gut microbiome, garners ever-increasing attention from both the scientific and public eye (and the press). But as with most other fads, there's a need to parse out fact from fiction, correlation from causation, reality from overhype, when determining how exactly the microbiome affects human health. Funneling down the complex etiology of human diseases to a particular gut microbe or set of microbes often involves far-reaching claims incompletely sup­port­ed by experimental evidence. 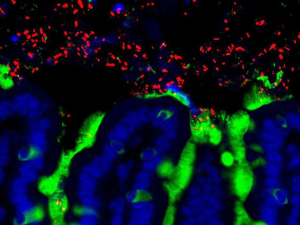 The field of microbiome research is truly sprawling, the claims seemingly covering everything under the sun. For example, recent studies have claimed that autism can be attributed to gut microbes, that tumor microbiomes af­fect the progression of pancreatic cancer, and that the presence of Veillonella atypica in the gut improves the ability to run – the works. Health conditions that have been linked to the microbiome span diabetes, IBS, obe­sity, autoimmune diseases, mood disorders, allergies, atherosclerosis… Some of these studies seem more grounded in biology, such as those that involve diet and metabolism, while others seem more interpretative, such as those involving the autism spectrum. A more outland­ish study even reported that having Christmas dinner with in-laws causes changes in gut microbiome composition. I've found it very disorienting to wade through these vast swaths of causal relationships attributed to the microbiome, to winnow out what's credible and what's not. Some parts of the field teeter on modern-day snake oil, best lampooned by the "Overselling the Microbiome" Award by Jonathan Eisen at UC Davis. When Inter­net ads now include microbio­me-themed spin-offs of 'Doctors hate this! One weird trick…', it’s pro­bably a good indication that the hype is far-reaching.

So, here are some reads regarding good practice in designing and critically appraising microbiome studies: how to squint past the flashiness of the microbiome limelight.

The two more recent pieces expand upon points made by Hanage's 2014 precedent, which puts forth five key questions for scrutinizing microbiome research: 1. Can experiments detect differ­en­ces that matter? 2. Does the study show causation or just correlation? 3. What is the mechanism? 4. How much do experiments reflect reality? 5. Could anything else explain the results? Keeping such questions close at hand prevents being blindsided by hype. Hanage, Walter, and Fischbach all warn against turning the microbiome into the default scapegoat for all unknowns regarding the human body in health and in disease.

One such strategy to winnow out the evidence-backed is to direct efforts towards elucidating me­chanisms at the molecular level, as discussed in the Fischbach perspective piece. Taking a reduc­tionist approach to the microbiome produces more meaningful findings. Another is to stay vigilant about mouse models and to use them only when appropriate, as discussed by Walter et al. Trans­planting human microbiota into a murine surrogate host is unlikely to produce the same condi­tions as in the original host, and studies should be careful not to conflate experimental units with observational units. Accordingly, the piece presses that funding agencies should be prepared to provide for increased costs associated with more stringent animal-model studies. 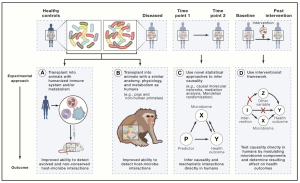 Fig. 2. A figure from Walter et al.: "Al­ter­na­tive Experimental Approaches to Det­ermine the Cau­sal Role of the Gut Micro­biome in Disease Etiology." Source

Walter et al. also make a good point about where some responsibility for hole-riddled studies falls. Much of the blame for the surge in publications on disproportionately overstated microbiome research falls on current publica­tion and funding infrastructures. Publications, whether scientific journals or general news outlets, are skewed to­wards flashy positive-result publications and attention-drawing headlines. Negative results are shelved away out of sight. The piece offers an apt description of this mind­set: "in pursuit of the spectacular."

So, both direct and indirect producers of research should be prepared to make changes, for the sake of preventing misinformation. We currently live in the so-called "post-truth era," bursting at the seams with fake news, but maybe at least the science should make every effort to be credible. There are time, effort, and cost sacrifices required, but then again, no guts, no glory.