Fungomania III. Of a Fungus and a Crop

There are literally thousands of fungal species that cause plant diseases and their effects on agri­cultural crops ends of costing billions of dollars every year. Many of these fungal plant pathogens are fascinating subjects for study. Among the many, I have a personal "favorite." I place the word in quotes because I recognize the oddity of labeling a pathogen as a favorite; but grant me license. This favorite of mine is Ustilago maydis, the causative agent of corn smut. Before going further on the fungus, two points on corn smut. First, on the common name of the afflicted plant, I'll use the word maize to refer to Zea mays instead of corn since the latter can mean pretty much any grain except in American English. Second, just looking at the image in Figure 1 you'd be tempted to call that ear of maize dirty. No surprise that the disease is called smut, from the German word Schmutz (literally meaning dirt but with the connotation of something you'd want to get rid of.) I don't know about you, but I find Schmutz has a wonderful ring to it! That already was bound to predispose me to like Ustilago maydis, the causative agent of "maize Schmutz." But there is much more. 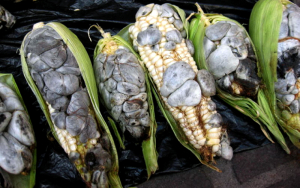 When grown in the lab, U. maydis grows as a yeast and multiplies by budding off daughter cells, very much like Saccharomyces cerevisiae. As such, it is quite amenable to genetic manipulation, a fact that has made it into a ve­ry useful model organism. When grown on the surface of a plant, the fungus displays a completely different life­style. Individual haploid cells grow conjugation tubes in search of compatible mates. Once they find each other, they fuse to produce hypha which can penetrate the maize tissue. Growth of the fungus inside the plant pro­duces "schmutzig" tumors (galls), which are particularly striking when they grow inside the kernels. As the infection proceeds, the fungus secretes numer­ous effectors that greatly affect plant physiology mainly through the modulation of phytohormone pathways. A recent review on this topic by Xiaowei Han and Regine Kahmann makes for very good reading on the subject.

In response to the infection, the plant turns on a defensive oxidative burst, able to damage most cellular components, including DNA. To resist this plant attack, the fungus mounts an oxidative stress response and it also has an efficient DNA repair system. Some fungal avirulent mutants de­fined the components of this repair system. Interestingly, one component of the U. maydis DNA repair system, Brh2, is similar to the human breast cancer susceptibility protein BRCA2 and it was through studies with the U. maydis protein that the function of the human protein was under­stood. Score a point for basic research on plant pathogens!

As a plant pathogen, U. maydis stunts the growth maize and thus causes large losses of this im­portant agricultural crop. In fact, in most locations maize growers go through great efforts to era­d­icate corn smut. But that is not universally the case, which brings me to the main reason U. maydis is my favorite fungal plant pathogen. In Mexico, afflicted maize – known as huitlacoche – com­mands a much higher price than uninfected ears because it is considered a delicacy. Fresh huit­la­coche is difficult to come outside of Mexico but the canned variety can be purchased in specialty food stores at many locations. If you ever come by a can, give it a try. Warm up a maize tortilla on a skillet, add some shredded cheese and hot salsa and then smother it with a generous helping of huitlacoche. Oh yum! Enjoy a rarity, the consumption of a fungal plant pathogen!