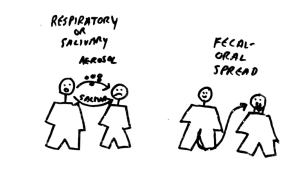 A much used term nowadays, "contagion" or in adjective form, "contagious," is derived from Latin contāgiō (touch­ing, contact, contagion) related to contingō (touch close­ly). In its original meaning, the term referred solely to a disease transmissible by direct physical contact. Nowa­days, its meaning has been broadened to include all com­municable or infectious diseases. As Wikipedia says: "Of­ten the word can only be understood in context, where it is used to emphasize very infectious, easily transmitted, or especially severe communicable disease." Sure, be­cause of its scary connotation, it made it into the title of a mighty frightening movie. 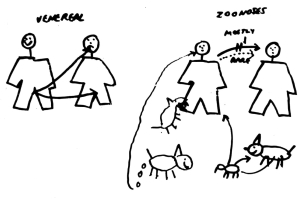 The simple sketches by the late Stanley Falkow shows  the main routes of transmission to and between people. In its simplicity, it reveals one of Stan's great tributes, to stream­­line and thus make available to all concepts that otherwise may have appeared to be too intricate for a succinct description. With the cacophony of information that bombards us daily about the present pandemic (a pandemonium if there ever was one), Stan is sorely mis­sed by those of us who had heard him make witty but profound statements. How we would benefit from his clarity of mind and his attention-grabbing pronounce­ments, often expressed with some choice invectives.

We thank Igor Brodsky from the University of Pennsylvania School of Veterinary Medicine, Philadelphia, PA, and Dr. Lucy S Tompkins MD PhD, wife of the late Stanley Falkow, for their permission to use Stanley Falkow's cartoons on these pages. Asked how he came to have the slides, Igor replied:"I was a PhD student with Stan­ley, and when I left to do my post-doc in innate immunity in the early-mid 2000s, it was before the microbio­me became super fashionable and certainly before the general appreciation in the field of immunology for how powerful and fascinating microbial pathogens were. Many (though not all) immunologists still viewed bacteria as bags of LPS for delivering ovalbumin. I asked Stanley for some slides for a presentation that I could give on microbial pathogenesis for immunologists. These were part of his teaching slides for the medi­cal microbiology course and graduate microbial pathogenesis course that he taught at Stanford for many years, and he shared them with me. When Stanley died in 2018, I posted them to my twitter feed to honor and celebrate his legacy of teaching microbial pathogenesis to countless generations of students."