As we all hunker down in quarantine from the global spread of SARS-CoV-2 and associated COVID19, some may have extra time available, perhaps to pick up a good book. We therefore thought we’d help out by offering a list of suggested pandemic-related readings. To start off, fifteen suggested non-fiction titles to accompany the latest news you might be getting through sources like This Week in Virology. To follow, twenty suggested novels that feature pandemic outbreak in one form or another. I'm sure that I've missed a few that readers might know of as well, so let us know if you do. 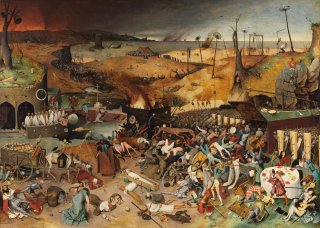 The Triumph of Death by Pieter Bruegel the Elder. Source

Before that, a note for those who still remain busy amid essential services or maintaining family life, and don't have the time to commit to a full book. There are countless short stories out there featuring a pandemic as a plot point, but one short story in particular comes to my mind that I'd recommend. That is "The Last Flight of Doctor Ain" by James Tiptree, Jr. For those who aren't familiar with Tiptree, it is the pseudonym of Alice B. Sheldon, who in addition to being a writer, worked at one time or another as a research psychologist, World War II intelligence officer, CIA agent, and chicken farmer. She sadly killed herself in 1987, but left behind a volume of respected speculative fiction, including the above story of viral pathogen release.

On to the lists, each presented in alphabetical order by author:

Until then, happy reading!

Sunday's New York Times featured an article in the Opinion section entitled "What the Great Pandemic Novels Teach Us" by Orhan Pamuk, winner of the 2006 Nobel Prize in Literature, and translated from the Turkish by Ekin Oklap. Along with Dafoe's plague novel, it discusses an early work by Manzoni I hadn't known of, and mentions a novel that Pamuk is currently writing entitled "Nights of Plague". Given Pamuk's influences include Dostoevsky and Mann, I need to check out his novels and now eagerly await this new one. The article is a nice consideration of our historical response to pandemic through literature, and what that says about our humanity. Thanks to Elio for catching this article online before its hard copy appearance to me over morning coffee.