« Fungomania III. Of a Fungus and a Crop | Main | Of Terms in Biology: Contagion »

We recently admitted that we  consider algae and protists only rarely here at STC. Before this deficit became an embarrassment, we were fortunate to find a blog post about red algae, which we re­produce here with kind permission from the author, Lukáš Novák. 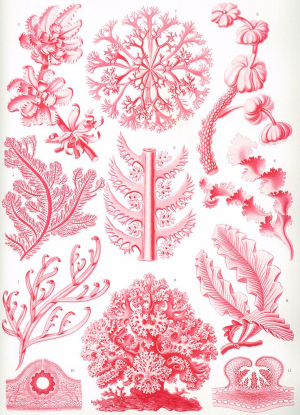 You may be familiar with some red algae even without re­alizing it, as many species have profound ecological, in­dustrial, and culinary importance! Macroscopic red algae represent one third of all seaweeds grown in aquaculture worldwide and create half of the economic value gener­at­ed by this industry. Among the most commonly used are species of the genus Pyropia (formerly Porphyra ; class Bangiophyceae) known as nori and used in Japan­ese cuisine, for example, to wrap sushi and onigiri (see frontispiece). Chon­drus crispus (class Florideophyceae) known as Irish moss is harvested for a gelatinous poly­sac­charide, carrageen­an, used as a stabilizer and thick­en­er in processed food industry, for fining beer and wine, and for traditional pro­duction of tasty milk-based des­serts in Ireland or the Car­ibbean. Another polysaccharide of rhodophyte origin, agarose, has similar uses, but is also a ubiquitous mate­rial used in biological laboratories. Agarose is isolated from a number of red algal species of the class Florideo­phyceae commonly referred to as "aga­rophytes". 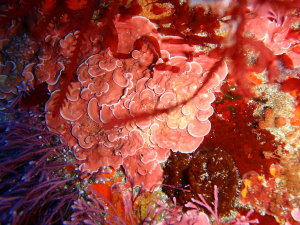 On the other end of red algal diversity spectrum are ex­tre­mophilic single-celled rhodophytes of the class Cyani­diophyceae which thrive in acidic and hot environments around hot springs and fumes. There are currently only three genera with eight species recognized in this class, but environmental sequencing studies hint at much grea­ter undiscovered diversity. Phylogenetic analyses place Cyanidiophyceae as sister to all other red algae, and so their extremophilic nature was proposed to reflect the habitat of the last common ancestor of all rhodophytes. This so called "hot start" hypothesis, if true, could explain some exceptional genomic and functional simplifications observed in living red algae.

Between the large, multicellular seaweeds of Bangiophyceae and Florideophyceae classes on the one hand and the extremophilic, simplified, single-celled Cyanidiophyceae on the other lie the long neglected lineages which are the true focus of this story: four classes with delightfully arcane names Rhodellophyceae, Compsopogonophyceae, Stylonematophyceae, and Porphyridiophyceae. Collectively they are known as mesophilic non-seaweed red algae and this unflattering designation easily reveals why they didn't attract much scientific interest so far: mesophilic means they live in "normal" non-extreme conditions and non-seaweed tells that they don't form large multicellular bodies, which would be interesting for human use or important as ecosystem creators. Members of these four classes are usually unicellular or form simple filaments, but always are tiny and in­conspicuous. 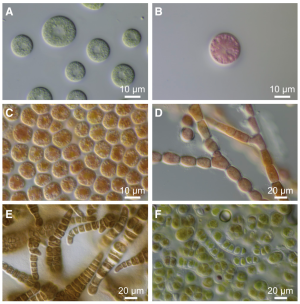 It used to be assumed that mesophilic non-seaweed red algae are paraphyletic, forming several independent lin­eages branching one by one and representing interme­diate steps between Cyanidiophyceae and the two large seaweed classes. However, recent phylogenomic analysis revealed that the four classes actually form one mono­phy­letic lineage (sharing a single exclusive common an­cestor) which was classified as a new subphylum Proteo­rhodophytina.

This result came as a side product of interest in another fascinating aspect of rhodophytes: the genomes of their plastids. Plastids, the photosynthetic organelles of algae and plants, are in fact highly integrated bacterial sym­bionts and as such they usually retain remnants of their own DNA taking care of various essential functions. Plas­tidal genomes of red algae were generally considered to be primitive, evolutionary stable, small, efficient, and com­pact. They retain the highest number of genes of all studied plastids, but these genes are organized very fru­gally without much non-coding sequences taking up space. The structure of plastidal genomes looked very similar across the entire phylum. However, these obser­vations were made mostly on the well-studied seaweed and extremophilic red algae, not on mem­bers of Proteorhodophytina. Sergio Muñoz-Gómez and colleagues (2017) started filling this know­ledge gap by sequencing plastidal genomes of previously neglected mesophilic non-seaweed red algae.

What they found was a very different picture. All newly sequenced plastidal genomes are larger than those of previously studied red algae and show a remarkable diversity of sizes between the various Proteorhodophytina species. One of them, Corynoplastis japonica, has the largest plastid genome which also contains the highest number of introns of all studied organisms. The Proteo­rhodophytina plastidal genomes are generally heavily bloated with non-coding regions and highly varied in their gene arrangement, which contrasts starkly with the conserved, compact genomes observed in seaweed and extremophilic red algae.

So far, we were discussing red algae and also touched on green algae and land plants as well as Glaucophytes. All these lineages have a common origin in an ancient cell which engulfed a cyano­bacterium and instead of eating it, domesticated it and learned how to use its photosynthetic ma­chinery to make its own food from sunlight and carbon dioxide. This is the origin of the primary plastid – defining trait of the supergroup Archaeplastida. But what about other types of algae? What about kelp, forming vast, cathedral-like underwater forests? What about diatoms, living in tiny houses of glass? What about coccolithophores, whose enormous quantities form basis of chalk sediments like the white cliffs of Dover? What about dinoflagellates, which live in symbiosis with corals and whose sensitivity to climate change is causing devastating coral bleaching? There are numerous groups of algae which do not belong in Archaeplastida, and yet they also have plas­tids and perform photosynthesis. Most of them are so-called secondary red algae and deep ori­gins of their plastids can be traced back to rhodophytes. 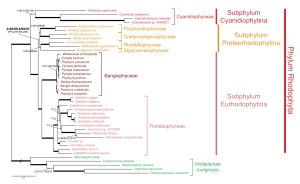 In this case it was not a cyanobacterium who got eaten and tamed, but a fully developed eukaryotic cell already endowed with a well-integrated plastid. The resulting "secondary" plastids have a wide range of forms, each adapted to its new host in a different way. They usually have multiple additional membranes and some even keep a remnant nucleus of their original red algal host, creating an intricate genomic landscape in the cell. Many unanswered questions remain about these complicated plastids and their history. One of the most pressing is: How many times and in what lineages did this happen?

We are not sure whether all these lineages share a com­mon ancestor which already had a secondary plastid (this is called "chromalveolate hypothesis"), or rather only some lineage gained the original secondary plastid, and then other, unrelated or­ganisms have eaten and enslaved them, forming a chain of symbioses, resulting in tertiary, qua­ter­nary, or even higher degree plastids ("serial endosymbiosis"). Current understanding of the large-scale eukaryotic evolution favors the latter, more complicated scenario, but the jury is still out.

We also don't know which lineage of red algae was the original donor of plastid. And was it only one lineage? What if there were multiple origins of secondary plastids from different branches of the rhodophyte tree of life? Phylogenetic analyses seem to endorse the notion of single origin, but the statistical support for this is low and unconvincing and such results can easily be attributed to a low number and limited diversity of red algal genomes included in the analyses. There is a lot of room for surprises. Multiple origins of secondary red plastids might actually elegantly explain cer­tain discrepancies in previously proposed evolutionary scenarios, for example, concerning the numbers of membranes surrounding different types of secondary plastids.

Based on properties of secondary red plastids, we can assume that their ancestors were simple, single-celled, or colonial red algae living in moderate conditions. This description perfectly mat­ches the newly erected subphylum Proteorhodophytina and it is possible that the ancestor (or ancestors?) of secondary red plastids was indeed a member of this lineage, or closely related to it. This puts previously neglected mesophilic non-seaweed red algae in center stage of one of the greatest stories in evolutionary protistology! 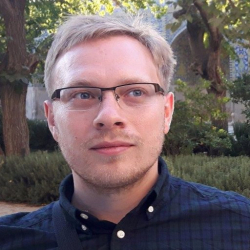 Lukáš studied evolutionary protistology in the lab of Vladimír Hampl, and obtained his PhD from Charles University in Prague, Czech Repub­lic. In March 2020, he joined the DEEM team at Université Paris-Sud in Orsay, France, for a project that aims to gather more genomic data, both plastidal and nuclear, from a broad diversity of Proteorho­dophy­tina and finally bring this lineage into light.