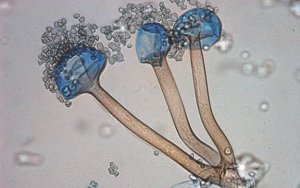 How many symbioses that involve three partners can you think of? Surely, not many. But here is one, involving a pathogenic fungus, a bacterium, and a fungal virus. The virus being the newcomer, let me start with the well-known partnership, that between the fungus and the bacterium. The fungus, Rhizopus microsporus, is a pathogen of a variety of plants, such as maize, sunflowers, and rice, where it causes various rots and blights. It can even infect humans, causing necrotic lesions especially in infants. To balance this out a bit, a closely related species, R. oligosporus, is used in the preparation of fermented soy products such as tempeh.

To do its damage, R. microsporus partners with a bacterium, one that used to be called Burkholderia but is now known as Mycetohabitans ("fungus dweller"). This symbiont is typically found in pathogenic strains of the fungus and is vertically transmitted. The bacterium produces a number of toxins that affect the hosts, among them the antimitotic agent rhizoxin.

Probing into the bacterial-fungus interactions led the authors of a recent paper to a detailed RNA sequence analysis. A commentary by the senior author is found here. To their surprise, these investigators, mainly from labs in Mexico, discovered the presence of yet other partners, two viruses. Phylogenetic analysis told them that they belong to the Narnaviruses. Members of a fascinating group that are known to infect yeasts, other fungi, and even Caenorhabditis elegans. They are remarkable in several ways, notably not being endowed with a capsid, a topic discussed in detail here. They derive their name from NAked RNA viruses. Their virions, if you want to call them that (why not viroids?), are exceedingly tiny. They consist of a small double stranded linear genome, 2.3 to 2.9 kb in size that encodes a single protein, 80-140 kDa, which looks and acts like an RNA-dependent RNA polymerase. This viral RNA can be found in the cytoplasm in very high copy numbers (under stress conditions, up to 100,00 units per cell). Relatives of this group, the Mitovirus, infect fungal mito­chon­dria.

These three players, fungus, bacterium, and virus, hold an animated conversation. Transcription from the viral sequences is influenced by many factors, such as the fungal reproduction and its development, the medium, and the stage of fungal development.  To conveniently study these interactions, the authors used antibacterial and antiviral drugs to create strains of fungus that are free of both bacteria and viruses. The fungi could then be reinfected at will. One interesting result suggests that bacterial colonization is reduced in the absence of the viruses. If so, the viruses would influence the degree of pathogenicity of the fungus, something that is in the process of being ascertained directly (personal communication by the last author of the paper). But there is more: The presence of the viruses decreases the fungus' asexual reproduction (sporangiospore formation). On the other hand, sexual sporulation (zygospore formation) is nearly abolished in the absence of the bacteria and the viruses. I can't say that I fully understand what's going on here but interesting it is.

The data suggest that the metabolism of the fungus is "rewired" by the growth and presence of the symbionts, possibly to enhance its metabolic plasticity. The authors ask several good questions such as which symbiosis arose first? Did one symbiont, bacterial or viral, facilitate the establishment of the other? Did either alone or together influence the evolution of the fungus? Surely, we will hear more about this ménage à trois.