« TWiM 216: It starts with a cough | Main | Unicellular Capsaspora and animal multicellularity »

Cytokines are small proteins (~5−20 kDa) that play a large role in our defenses against infection. They stimulate both the innate and the acquired immunity and coordinate the interplay between the two, thus can be properly called immunomodulators. There are lots of them, including interferons, interleukins, tumor necrosis factors, chemokines (chemotaxis-inducing cytokines), and others. 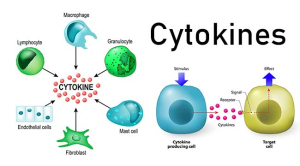 Cytokines are made by cells of the immune system such as macrophages and lymphocytes, as well as by endothelial cells, epithelial cells, and fibroblasts. Beyond their role in immunity, they affect a number of seemingly unrelated functions such as hematopoiesis and cell proliferation. They even play a role in cancer and reproduction. Thus, they possess a mosaic of activities that spill out beyond their role in immunity.

There is nothing simple about cytokines, as they are widely pleiotropic, that is, having overlapping functions. Thus, cytokines have turned out to be major players in the well-being of the humans and animals. Are cytokines hormones? Not really, because hormones are present in larger amounts (often 103× more) and, notably, are made by specialized cells.

The first cytokine described, Interferon alpha (IFN-α), was discovered in 1957. It turned out to be important in controlling viral infections. Since then, it has been joined by a vast array of other cytokines. They can be grouped into two functional groups, those involved in the cellular and in the humoral immune responses.  Cytokines bind to specific receptors that communicate with their cells' nucleus to modify its transcriptional activities. Their absence may cause immunodeficiencies.

Present in "normal" amounts, cytokines help our immune response. However, some infections, to include COVID-19, elicit the outpouring of such large amounts of cytokines that the result is a massive inflammatory response. This is called a "cytokine storm" (CRS), which can cause serious harm and even death. For as yet unexplained reasons, cytokine storms are not a universal response to the infection with SARS-CoV-2, but varies between individuals.