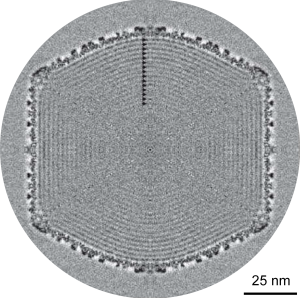 For more than two decades we have known that the doub­le-stran­ded DNA of pha­ges is neat­ly rol­­led up in their cap­sids and fills them com­ple­te­ly. Cerritelli et al. (1997) de­mon­stra­ted this for coliphage T7, and later Jiang et al. (2006) for Sal­mo­nel­la phage ε15 (see here). With a length of ~40 kb, both phages have 'me­di­um si­zed' ge­nomes, and it is fine to learn now from a very recent paper that it's not different for 'larger' phages like the jumbo phage phAPEC6 of E. coli APEC. This phage has a chromosome of 350 kb, encoding 551 orfs (83% of unknown function.) Note that, curiously, this phage genome is the same size as a mealybug endosymbiont, "Candidatus Mikella endobia" (350 kb).

Wagemans et al. analyzed a central slice of the phAPEC6 head by cryo-electron tomography (CryoET) and found a stunning stack of 15 concentric layers of DNA that were only blurred around the central axis (Fi­gure 1). Unfortunately, they do not indicate in which orientation the vertex of the portal protein lies. But one thing can be excluded on the basis of this highly regular pattern, namely that the DNA in the capsid is wrapped up in a wild ball of wool. However, this 'flat' two-dimensional image does not give a tangible clue as to how exactly the DNA is wound up. For all known dsDNA phages, DNA packaging follows the route outlined in the diagram in Figure 3. Linear phage DNA enters the pro-capsid via the (oligomeric) portal protein. The threading of the DNA through the portal pro­tein's inner channel is performed by the terminase complex, one of the strongest known ATP-dri­ven nanomotors (you find more details in a fine review by Sherwood Casjens.) 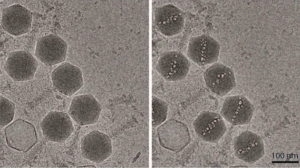 Under a high electron dose for cryo-EM imagery, the authors saw the formation of apparently gaseous bub­bles in the phage head (Fi­gure 2). They attribute their formation to the disruption of radiation-sensitive pro­teins that are arranged in a cylindrical form (91×18 nm) along the portal axis. They call this structure 'inner body,' as such characteristic bubblegrams had also been found earlier in other phages, including coliphage T7, Salmo­nella phage ε15, and phiKZ-like phages of Pseudomonas. 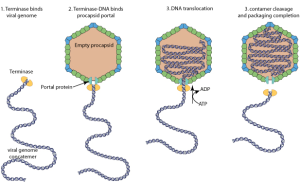 As every experienced sailor knows, when "shooting up a line" you have to twist a half turn for each loop with your hand against the direction of travel to prevent the loops from twisting into a figure-8 form. That would be pre­vented by negative supercoiling in the case of DNA. And, what is known, is that the DNA end that enters − driven by the torsional stress exerted on the DNA during packing − the next host cell first was the last one to be packaged in the former host cell. But it is not known whether the DNA first fills the pro-capsid part distal to the portal protein or proximal to it (Figure 3 is suggestive of the latter.) Be that as it may, it must be ensured that the DNA does not get knotted or entangled during "un­rolling," with or without a dedicated spindle as, perhaps, the 'inner body.' Future experiments might solve this riddle.