Eukaryotic cells may be composed of many parts, but, by and large, they make some kind of sense. Take the nucleus for example. Its space is defined by the nuclear membrane and, for all the complexity of its many transactions, it is amenable to a reasonable understanding. You cannot say this for the prokaryotic nucleoid. Not being bound by a membrane and not organized into chromosomes, one could think that its DNA would meander freely in the cytoplasm. Far from it. It is confined to the nucleoid, a body that occupies a defined space, 20% or so of the cell's volume. Its DNA is tightly packed, if extended, it would be about 1000 times longer than the cell in which it resides. Several factors participate in keeping the nucleoid's DNA condensed, including supercoiling, macromolecular crowding, and the action of DNA binding proteins and RNAs. The best studied nucleoid-binding proteins in E. coli are called IHF, H-NS, and Fis. They range from 9 to 15 kDa and form homo- and heterodimers. These proteins are involved in bending, bunching, stiffening, and bridging the DNA. Binding of these proteins can be specific and they are involved in transcription, replication, recombination, and repair. Most of the binding, it turns out, is actually not sequence-specific but participates in compacting the DNA. See reviews here, here, and here.

How to compact DNA into a nucleoid? One nearly universal answer seems to be the use of conserved proteins called condensins. These are found also in eukaryotes, where they play a key role in chromosome organization and mitosis. Condensins are V-shaped dimers with a business at each end, reminiscent of the claws of a crab. They grab onto two distal sites on the DNA thus bringing them closer. This, of course, compacts the DNA. The most common condensins are part of a system known as SMC (for Structural Maintenance of Chromosome). A separate system, known as ParABS, consists of one or more sites on the chromosome known as ParS to which the protein ParB binds. ParABS is found almost universally among bacteria and in some archaea. Exceptions are, oddly, E. coli and some other gamma-proteobacteria, where the corresponding system is known as MukBEF. (Imagine E. coli not being typical!) Regardless, these two systems seem to be functionally equivalent. 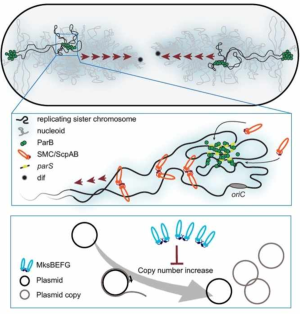 Figure 2. Cartoon of a molecular function of the two condensin systems. A growing C. gluta­mi­cum cell with two polar attached chromosomes is show in the upper panel. The ParB-parS nuc­leoprotein complex is the main organizing cen­ter of the chromo­some and required to load SMC con­den­sins (just like in B. subtilis or C. cre­scentus; middle panel). The alternative conden­sin MksBEFG complex is required to keep plas­­mid copy numbers in check (lower panel). One might speculate that the sub­unit MksG, which is absent in the hom­olog­ous MukBEF system in E. coli plays a crucial role in this process. Source

As expected, most of what is known about such systems comes from studying well known model systems such as E. coli, B. subtilis, and Caulobacter. But how about outliers? May they not reveal unexpected and interesting phenomena? A recent paper reports on such matters in Corynebacterium glutamicum, an actinobacterium related to C. diphtheriae and, more distantly, to the tubercle bacilli. As the name suggests, it produces glutamate in industrial quantities, and beyond that, various other amino acids. It differs from other rod-shaped bacteria in that it synthesizes its cell wall from a pole. This organism has two chromosomes that are stably bound to each of the cell poles. A bioinformatic analysis told the authors that this organism contains the genes for the two major two condensing systems, SMC and MukBEF. Chromosome capture experiments showed that the SMC complex induces the folding of the two arms of the replicating chromosome (replichores). Moreover, the origin region of the chromosome moved towards the center of the cell, thanks to the activity of the protein ParB. In their words: "This segregation is an exquisite example of cellular self-organization and reveals a structural role for the chromosome beyond encoding genetic information."

How about MukBEF? What does it do? To their surprise, this complex played no role in chromosome confirmation. Instead, these proteins localized to the cell pole. A fluorescent fusion of the protein MksB gave an unexpected result: When transformed with a plasmid, the florescence at the pole increased. The lab of Sorek had shown that the MksB system maybe a kind of anti-viral or anti-plasmid defense. Here, the investigators showed that low copy number plasmids were enriched up to 60-fold in the absence of MksB. Thus, these condensins have evolved to restrict the copy number of plasmids, a possibly defensive activity much different than chromosome organization. The lesson learned is that non-model organisms have indeed a lot to teach us.

A commentary to this paper can be found here.

Frontispiece: An electron micrograph of a longitudinal thin section of a dividing Escherichia coli bacterium. The centrally located nucleoid is prominent. Image made available by James D. Jamieson and the Department of Cell Biology, Yale University School of Medicine. Source