It is common in biology to look at little things to learn how the big parts work: we study molecules to understand cells and study organs to know how the body functions. But it is different with Cap­saspora, because it is a whole, a complete single-cell organism, and it is actively studied for eluci­dat­ing how a whole animal functions. Together with choanoflagellates, Capsaspora is being used to study the origin of multicellularity in animals (choanoflagellates were considered on these pa­ges here and here.) It is important to mention "in animals" here, as multicellularity evolved several times in­dependently in different lineages. Although the most elaborate multicellular forms are re­pre­sent­­­ed by animals and vascular plants, there are about 20 other examples of multicellularity, in­clud­ing different algal lineages, fungi, and slime molds. 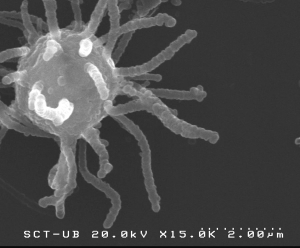 Such frequency in the tree of life means that multicellula­ri­ty is highly beneficial and… apparently not so difficult to evolve. Yet, we still don't understand all the laws of multi­cellular harmony and the mechanisms behind it. One of the strict rules for the cells within a macro-organism is to be altruistic. In other words, a cell should know when to die in order to sustain the appropriate body shape. For example, fingers are formed during the embryonic devel­op­ment due to the controlled death of cells in between them. It also should know how to save the organism from the troubles associated with cancer. Indeed, cance­rous cells seem to forget the rules of multicellularity and behave exactly opposite to how the obedient cell of an animal should act. Thus, uncovering mechanisms of the establishment of multicellularity in animals can lead to a better understanding how we hu­mans function, and, lastly, help cure diseases.

Increasingly, research groups are becoming interested in how the transition between the unicel­lu­lar and multicellular lifestyles happened, leading to the discovery of more and more wondrous things. Capsaspora owczaraki, a sister group to Choanoflagellates and Animals has played an es­sential role in this (Figure 2). Why Capsaspora ? If we want to learn about the origin of animal mul­ticellularity we should look into the transition moment − that is, into the unicellular ancestor of animals that triggered the transition. Since the time of this ancestor has long passed, the only way for researchers to know about the beginning of animals is to compare molecular functions and genomes of animals and their closest unicellular relatives. And Capsaspora is one of them (Figure 1). 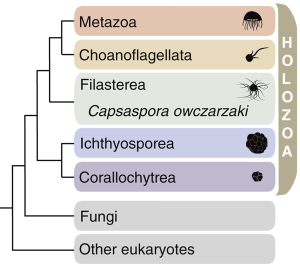 Capsaspora is beloved in our lab. We nurture it, talk about it all the time, hang its portraits on the lab walls. No wonder: it is cute − true, it can walk on its filopodia, like, on stilts, above the surface! It can form transient mul­ticellular structures, and it told us incredible genomic sto­ries. The genome of Capsaspora was sequenced and an­notated in 2013 by the lab of Iñaki Ruiz-Trillo and made a sensation in the field. The lab members identified in its genome some genes that, until then, were thought to be animal-specific, among them many transcription factors (TF), cell adhesion molecules (integrins, cadherins), and genes responsible for cell communication, such as tyro­sine kinases. They also found that Capsaspora has a TF, called Brachyury (from the Greek βραχύς, "short" and ουρά, "tail") that in animals is essential for embryonic de­velopment and commands the establishment of anterior-posterior symmetry. Brachyury from Cap­saspora proved its "animal identity" in a mesmerizing study with a frog embryo. The research­ers of this study injected the mRNA of Capsaspora’s Bra­chyury into a frog embryo depleted of its own. The TF from Capsaspora rescued the embryo's phenotype just like the endogenous frog Bra­chyury did (Figure 3.) That means that the active functional site of Brachyury is conserved even in the single-cell organism and likely was so in the ancestor of animals. This finding, support­ed by several other studies (see, for example, here and here), tells us that the unicellular ancestor of animals was a treasure chest filled with many molecular tools that built up the basics for multi­cellular cooperation in the subsequent evolution of animals. 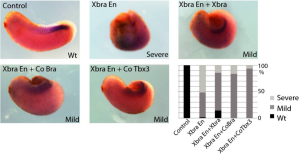 Interestingly, Capsaspora displays some of the fundamental processes that are characteristic of animal cells. In the lab, it shows three different life stages: an amoeboid stage (when it walks on the "stilts"), aggregative (when it secretes an extracellular matrix and glues cells together in groups), and cystic. These stages can be considered as temporal cell differentiations, and are reminiscent of cell differentiation in animals. Like in animals, Capsaspora’s cell states are established by ge­nomic and proteomic regulation: differential gene ex­pres­sion, alternative splicing, histone modification, and differential protein phosphorylation. For example, the aggregative stage of Capsaspora (Figure 3), probably the most exciting for researchers, shows increased expres­sion of the proteins involved in cell-cell adhesion and cell communication in animals. Proteins involved in the Hip­po signaling pathway (detected so far only in animals and Capsaspora), cytoskeleton rearrangement, cell-cell and cell-ECM (extracellular matrix) contact, sig­nal transduction, and cell communications have elevated levels of phosphorylation dur­ing the aggregative state but not in the other two stages. Differential phosphorylation of proteins suggests regulated changes in the activity of the target pathways.

The Tip of the Iceberg 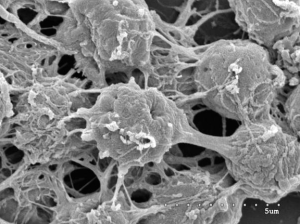 Choanoflagellates and Capsaspora provide many clues and answers to the ongoing studies on the origins multicellularity quest and will always be model organisms. But it is important to not stop here. In the evolutionary research involving the re­construction of ancestral states, we must take into con­si­deration the taxonomic diversity of the studied organ­isms. Recently, different research groups started to work on other unicellular relatives of animals, such as Ichthyo­sporeans and Corallochytreans. At the same time, more species within filasterean and choanoflagellate groups are being incorporated into the studies. All these species have diversified and rich genomic repertoires and promise to be helpful allies in further research. By including more unicellular species, we will be able to close more knowledge gaps in the multicellu­la­rity story and discover more details and new genomic specificities of our little relatives and our single-celled ancestor. 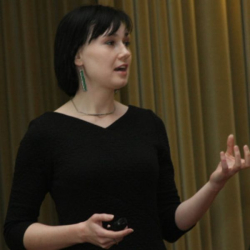 Victoria Shabardina is a postdoc in the Institute of Evolutionary Biology (IBE), Barcelona, Spain. She is interested in protein evolution and, in particular, in functional divergence of protein paralogs. In the lab of Iñaki Ruiz-Trillo, she applies bioinformatics and wet-lab methods to understand evolution of cytoskeletal proteins during the transition to animal multicellularity.