Virus. ...simply a piece of bad news wrapped up in protein, really ?

In my prior post, I answered the question "are viruses alive?" with a firm: no. That was the short answer, but there is also a long answer... and it's long because it's complicated.

For all biologists, life occurs in the context of cells. This has been the case since the middle of the 19th century when the mantra of cell theory, Omnis cellula e cellula (all cells come from cells), was pinned on the door of all biology laboratories. Biology went through radical transformations at the time with the rejection of spontaneous generation, and the ushering in of the 'Darwinian revolu­tion', and Mendelian inheritance. The latter two theories did evolve (!) considerably over the last hundred years − think modern synthesis − but cell theory was never challenged. 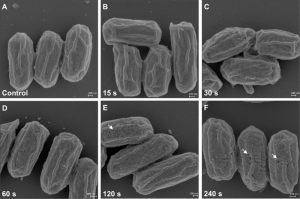 In the context of cell theory, we can enter the discussion of viruses being alive or not by comparing and contrast­ing them to spores. Dormant endospores, from Bacillus subtilis for example, are not alive when simply sus­pend­ed in buffer. But they kick back to life if given the right nudge. Present them with L-valine, which they sense through a receptor protein and germination ensues, fol­lowed by vegetative growth if the necessary nutrients are available. When nutrients become limiting sporulation can occur once again. Single spores form within 'mother cells' as almost 'vitrified' versions of a vegetative cell. They contain a complete, condensed chromosome − co­pied from the 'mother chromosome' and imported into the forming spore − and a reduced set of transcription and translation factors along with a few me­tabolic enzymes. The spore membrane is populated by numerous receptors, metabolism brought to close-to-zero, and the entire spore wrapped in a thick opaque coat that is highly resis­tant to physical damage. The mother cell undergoes lysis after completion of spore formation, set­ting the dormant spore free (covered by a protective protein coat, the exosporium (Figure 1).) Avoiding a decision of whether spores are alive or not, biologists prefer to call this state crypto­biosis, or, almost poetically, 'suspended animation.' Case solved. 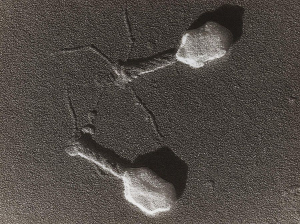 Now contrast spore formation to the life cycle of phage T4, and note the similarities. T4 virions, the metabolically inactive 'transport vehicle' of the phage chromosome (Figure 2) are not alive when resuspended in buffer or cell-free nutrient medium. But they kick back to life upon encountering E. coli host cells in nutrient medium. They attach and bind to lipopolysaccharide (LPS) and the ma­jor outer membrane protein, OmpC, by means of their tail fibers. The attachment triggers the contraction of the virion's tail sheath, which literally lets the tail drill a hole through both cell membranes and the peptidoglycan layer by mechanical force, enforced by the enzymatic mu­rein hydrolase activity of a baseplate protein. Once the tail has drilled through the inner membrane the phage genome is injected through the tail's inner channel into the cell's cytoplasm. Remarkably, both processes, tail sheath contraction and DNA delivery into the host cell cytoplasm do not require energy input. The energy required for both processes was invested in the virion components as a conformation during the assembly of the virion, analogous to a coiled spring that releases the stored mechanical energy when letting go. Inside the cell, the T4 chromosome (dsDNA) is transcribed by host RNA polymerase and trans­lated by host ribosomes. Once phage-encoded proteins are made, phage replication and recom­bination dominate the cell, ultimately yielding ~100 progeny T4 chromosomes. Phage proteins direct the intracellular formation of phage capsids and packaging of the chromosomes into the pre-assembled phage heads. The tail sheath, collar, whiskers, baseplate, and tail fibers, along with DNA-filled head form the phage T4 virion. Seven different phage encoded proteins induce lysis of the host cell, which releases the virions into the environment. Clearly, the process of making pro­geny phage is very much a "living system."

Wollman & Jacob (1961) do not attach much importance to the question of whether viruses/pha­ges are alive, rather they see different states: "...a virus may exist in three states; the only thing common to the virus in the three states is that it carries at all times much the same genetic infor­mation encoded in DNA. In the extracellular infectious state the nucleic acid is enclosed in a pro­tective, resistant shell. The virus then remains inert like the spore of a bacterium... In the vege­ta­tive state of autonomous replication the genetic material is free of its shell, overrides the regu­la­tory mechanism of the host and imposes its own commands on the synthetic machinery of the cell. The viral genes are fully active." In today's terminology, the "extracellular infectious state" of a virus/phage is called a virion, or virus particle. The second state, "the vegetative state of autono­mous replication," is conceptually equivalent to the vegetative growth phase of bacteria, and I will come to the third state, the "proviral state," in a moment. Raoult & Forterre entered the fray of the virus alive or not debate by proposing, in 2008, "...to di­vide biological entities into two groups of organisms: ribosome-en­cod­ing organisms, which include eukaryotic, archaeal and bacterial organisms, and capsid-encoding organisms, which include vi­rus­es." Without outright stating it, they seem to categorize viruses as "alive" since they put them on the same level as eukaryotic, archaeal and bacterial organisms, entities that embody the proper­ties of life. Our own Elio and his co-author Roland Wolkowicz joined the discussion through a com­ment to the Raoult & For­ter­re paper where they "propose that the defining at­tri­bute of all viruses is their dis­in­te­gration and recon­sti­tu­tion... Importantly, disintegration and reconstitution are to­tal­ly independent of time, with reconstitution occurring minutes, days, years or centuries after dis­in­te­gration." With this proposal, Schaechter & Wolkowicz had to cre­ate a new, separate category for the capsid-less state, joining it to the general grouping of viroids. All four authors attach im­por­tance to the capsids of the virus­es as defining structural elements, the "extracellular infectious state" according to Woll­man & Ja­cob. But only Schaechter & Wolkowicz mention the "vegetative state" albeit not speci­fi­cal­ly, on­ly in a rather indirect formulation addressing its time span as being "minutes, days, years or cen­tu­ries after disintegration" of the virion.

Perhaps because it does not affect all phages but only the so-called temperate or lysogenic pha­ges, neither Raoult & Forterre nor Schaechter & Wolkowicz address in their papers the third viral state described by Wollman & Jacob: "in the proviral state the genetic material of the virus has be­come subject to the regulatory system of the host and replicates as if it were part of the bacterial chromosome. A specific system of signals prevents the genes of the virus from expressing them­selves; complete virus particles are therefore not manufactured." This description of the "third state" of a viral genome as a largely silent component of the host genome can no longer be con­si­dered completely accurate today. We have ample evidence that genes of lytic and lysogenic pha­ges that do not only encode replication or immunity functions but rather contribute to the pheno­type of their host cell. One classic example is a virulence factor of pathogenic Vibrio cholerae strains, cholera toxin (CTX), which is expressed from the CTXϕ prophage. The numerous examples of phage genes expressed in the lysogenic state prompted Patrick Forterre to refine his concept, and he now states: "The living form of the virus is the metabolically active 'vegetative state of au­to­nomous replication', that is, its intracellular form." And acknowledging that both the genotype and phenotype of a cell infected by a lytic or lysogenic phage clearly differs from those of the un­in­fect­ed cell he proposes: "The virocell, being a cellular organism, corresponds to the 'living form' of the virus, whereas virions are in fact the equivalent of seeds or spores for multicellular organisms." So, according to Forterre, viruses/phages can be considered alive, and not just "bad news." In fact, for biology as a whole, viruses indeed bring with them a lot of "good news" because being some of the major agents of horizontal gene transfer, they lay the foundation for many of the possible directions of evolution.

You really don't have to be worried that after this tour de force I will also devote myself to the grander question "what is life?" I happily leave that to Erwin Schrödinger and George Harrison, in equal shares.

Finally, not a conclusion

I borrowed the title of this piece from Carl Zimmer, the reknown science journalist, who cites Jean and Peter Medawar in the NYT with their quote "[A virus is] simply a piece of bad news wrapped up in protein." Yet, as it often goes with quotes, it is difficult to accurately trace their origin, and over time, they often loose or gain words, not unlike viruses lose and gain genes. Such seems to be the case here. Probably the Medawars' drew heavily from the sentence "A virus can therefore be considered a genetic element enclosed in a protein coat" in the review paper by Elie Wollman and François Jacob from 1961. You find the quote as "A virus is a piece of bad news wrapped in protein" in Wikipedia, which gives Peter Medawar as author yet ignores the coauthor, Jean Meda­war, Peter's spouse and lifelong collaborator (Wikipedia has been repeatedly criticized for its gen­der bias towards male scientists, not the least by Jess Wade). As a third version, Michael Oldstone gives it as "[viruses are] a piece of bad news wrapped in a protein coat." The 'protein coat' smells of Wollman & Jacob, but is Oldstone trustworthy? Not so much, as he gives in his (peer-reviewed) journal article as reference the book by Peter and Jean Medawar with the title "Aristotle to Zeus, a philosophical dictionary of biology" (Cambridge, Mass, Harvard University Press, 1983, page 275) while Harvard University Press lists exactly this book under the title "Aristotle to Zoos. A Philo­so­phical Dictionary of Biology" (1985). Hey, that's more than a negligible typo, it's a shift towards the meta-physical! But before I go on nagging − or even dare to list here all the other variants you find by googling, beware! − I simply stop with another quote from said book of the Medawars: "It is a popular fallacy that chewing gum regains its flavor if removed from the mouth and parked, say, under a chair."