Feel dehydrated? Dig for some water then! 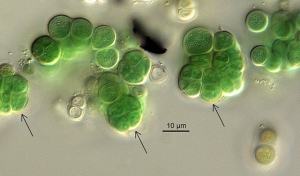 Cyanobacteria of the genus Chroococcidiopsis are known to survive harsh environmental conditions, high and low temperatures, ionizing radiation, and high salinity. Add resistance to dehydration or, in the extreme form, desic­ca­tion and you have a serious challenger of Deinococcus to the title "champion of resilience." Like the latter, Chro­o­coccidiopsis is easily found among other cyanobacteria in the Atacama desert in Chile, one of the driest places on the planet with unforgiving sunlight. No wonder that they are pet microbes of exobiologists pondering terra­formation on Mars; they were already recruited to the ISS as astronauts, including for spacewalks.

Chroococcidiopsis is not endemic to the Atacama, it's al­so found in the Mojave desert (USA), and the desert-like Al‑Jafr basin (Jordan.) But, importantly, it's not a true ex­tremophile, that is, an organism with optimal growth in extreme environmental conditions, as it is readily found in temperate climates worldwide and easily cultivated in the lab. Chroococcidiopsis is also known as "blaugrüne Felskugel" (blue-green rock globe) to phycologists, the branch of bo­tany that deals with algae, including the cyanobacteria as 'blue‑green algae' for tradition, and the German name "Felskugel" indicates a penchant of these pigmented (photosynthetic), coccoid bac­teria for rocks (Figure 1). Indeed, they are mostly found on and within mineral stones, which are, at least in thin layers, partially translucent like quartz (calcium carbonate) and gypsum (calcium sulfate, see Frontispiece.) 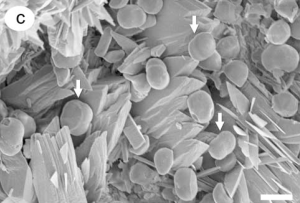 It is generally assumed that Chroococcidiopsis protects itself from excessive sunlight by growing within the rock and getting there through micro-cracks or crevices. In­deed, especially gypsum has a rather brittle texture (Fi­gure 2). The Atacama is so dry because very little mois­ture is transported inland from the Pacific Ocean. So, it was thought that the bacteria benefit from occasional dew when growing on the underside of rocks, as this de­sert has a hefty daily temperature gradient.

This comforting explanation − being consistent − got fis­sures when Wei Huang and coworkers from the Kisailus lab at the Dept. of Materials Science and Engineering, UCI, Irvine, CA, took a closer look at cyanobacterial inclusions in gypsum rock samples from the Atacama (their sampling point). More precisely, they looked at thin sections of samples by Fourier-transform infrared spectroscopy (FTIR) and found in regions enriched in cyanobacteria signals for gypsum (CaSO4·2H2O) surrounded by anhydrite (CaSO4). They hypothesized that the cyanobacte­ria gained access to the H2O bound as "waters of crystallization" in the gypsum to meet their own de­mands (see here for the different crystal structures of CaSO4·2H2O and CaSO4). After all, gyp­sum (CaSO4·2H2O) contains 20% (weight) H2O. 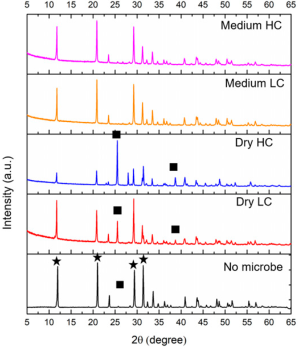 Figure 3. Cyanobacteria culture on gypsum sam­ples. X-ray diffraction (XRD). Gypsum rock control, not exposed to microbes (black curve), samples cultured in low concentration (LC) and high concentration (HC) of cyanobacteria in both dry and liquid medium environments. Dif­fraction peaks labeled with black squares repre­sent the anhydrite phase, while those lab­eled with stars are from gypsum. XRD was with Cu-Kα radiation, a generator volt­age of 45 kV, and tube current of 40 mA. The scan range (2θ) was from 10° to 70°; Intensity is given in arbitrary units (a.u.). Source

For the experiment, they inoculated autoclaved gypsum rock "coupons" (0.5×0.8 ×0.5 mm, made with a diamond saw) with a Chroococcidiopsis isolate from the Atacama and incubated them at two different cell densities in 96-well plates under two different culture conditions: 1. "dry condition" with no further liquid than the initial inoculum, and 2. "wet conditions" by adding culture medium during the incubation period. After 30 days, cells on and within the gypsum coupons had a bright green color, indicating the presence of photosynthetic pigments. Electron micro­scopy revealed the presence of cells and biofilm at and close to the gypsum crystals with anhydrite crystals near­by. Interestingly, Chroococcidiopsis cells (and biofilm) grew preferentially on the "narrow side" of the gypsum crystals and not on the "broad side" (see here, and Figure 4, H). When they analyzed the ground coupons by X-ray diffraction (XRD), they found signals for anhydrite only for the "dry condition" samples, and stronger signals for the samples with higher cell numbers in the inoculum (Fi­gure 3). The "wet condition" samples gave signals for gyp­sum only, as did the control (a minor flaw: the authors do not indicate whether the control "without bacteria" was incubated under "dry" or "wet" conditions.) This is a clear indication that Chroococcidiopsis can access the crystal water in CaSO4·2H2O during growth. But apparently it does so only if no other source of H2O is available. But how does Chroococcidiopsis "nibble" on gypsum? FTIR analysis and Raman spectroscopy of gypsum coupons cultured with high cell concentrations showed significantly more intense absorption bands for C=O and O−H than for those with the small­er inocula, pointing to the presence of acid moieties, for example, organic acids in the biofilm surrounding the cyanobacteria. This was as close as they could get − mass spectrometry might eventually tell more − to pinpointing which secreted metabolite(s) solubilize the CaSO4·2H2O crys­tals to access the H2O. 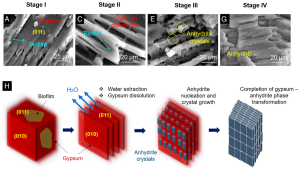 Based on their experimental results, Huang et al. estab­lish a "timeline" for the gypsum-digging by Chroococci­diopsis: cells attach and form biofilms on the {011} pla­nes of gypsum crystals. Gypsum dissolves, and water extraction occurs. Based on the crystal structure of gypsum, the water of crystallization layer is exposed to the {011} planes, but not to the {010} planes (see here). As the single crystalline gypsum dissolves and loses wa­ter of crystallization, it transforms via precipitation of nanocrystalline anhydrite. These anhydrite nanocrystals precipitate on the surfaces of gypsum crystals. Short-­range alignment of the anhydrite nanocrystals is ob­ser­ved. Large micrometer-sized anhydrite crystals are for­med via particle attachment and alignment (Figure 4).

1  Digging for water of crystallization in gypsum-rich rocks or soil is an amazing skill but probably not unique to Chroococcidiopsis. Sara Palacio and colleagues from the Instituto Pirenaico de Ecología (IPE-CSIC) in Jaca, Spain, could show in an earlier study that the crystalliza­tion water of gypsum rocks is a relevant water source for the gypsum‑specialist Helianthemum squamatum, a plant from the Cistaceae family of ~200 species, known to prefer dry and sunny habitats, and growing well with its shallow roots on poor soils. Their analyses of the hydrogen (δ2H) and oxygen (δ18O) isotope composition of the xylem sap of H. squamatum revealed that in the drier summer season, and unlike during spring with a more balance composition, the contribution of gypsum crystallization water accounted for a whopping 70–90% of the water in the xylem sap of the plants while the contribution of free top soil water decreased to 0–10%. However, these researchers could not unambiguously identify the miners responsible, that is, whether the digging was done by the plant or by its associated root microorganisms (including arbuscular and ecto-mycorrhizae.)

2  When Chroococcidiopsis dig for water in gypsum, they leave behind anhydrite as Huang et al. have convincingly shown. What the authors do not mention explicitly is that, with the H2O gone, the density of gypsum (2.32 g/cm3 for CaSO4·2H2O) increases to 2.96 g/cm3 in anhydrite (CaSO4), thus leaving actual space for the bacterial colony/biofilm to expand by growth. Drilling holes with­out mechanical aids, and without disposing of the rubble by transportation but by promoting a phase transition in the minerals, that is, their re‑crystallization is rather foreign to the imagination of mining engineers. 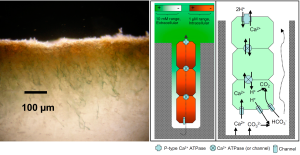 Figure 5. Left: Close-up of a calcite chip heavily infested with M. testarum BC008. Single green filaments can be observed deep in the crystal ma­trix. Notice the re­precipitation of a yellow, light-scattering micrite layer close to the surfa­ce. Right: Inferred nature and distribution of trans­porter components (legend at bottom), and the fate of Ca2+ and CO32− after calcite dissolution. Source

3  Mining engineers would probably appreciate how an­other cyanobacterium, one that is only distantly re­lated to Chroococcidiopsis, performs mining. Mastigocoleus testarum BC008 is a filamentous, true‑branching, hete­rocystous cyanobacterium, and considered an euendo­lith, that is, an organism that penetrates actively into the interior of rocks forming tunnels that conform roughly with the shape of its body (mentioned here in STC by guest author Jeff Marlow.) Ferran Garcia-Pichel and co­workers from the School of Life Sciences, Arizona State University, Tempe AZ, found in a study from 2010 that this cyanobacterium bores into calcite (CaCO3) under lab conditions, with active photosynthesis providing the re­quired energy, ATP. As depicted schematically in Figure 5 (right), the leading cell in a filament, the tip of the drill so to speak, exports H+ ions during photosynthesis, which solubilize the carbonate, CO32−, from the calcite, resulting in an increase in the concentration of free Ca2+ ions. The Ca2+ ions are taken up and, driven by ATP consumption, transported from the tip 'upwards' to the lagging cell via a hand­over by P-type Ca2+ ATPase transporters in the chain of filamentous cells (they found in buried filaments two such Ca2+ ATPase transporters overexpressed two- to ten-fold in comparison to non-boring cells.) The lagging cell deposits the rubble, Ca2+, as micrite (recrystallized form of lime mud) on a dump at the entrance to the shaft (Figure 5, left). Doesn't this sound much more like "classical mining" than what Chroococcidiopsis is doing with gypsum?

Microbiologists are left with the unsurprising insight that they have to look closely at each system, at each cyanobacterium individually, if they want to understand where, why, and how they go about "mining." And doing this would not be a side-track since it is becoming increasingly clear that cyanobacteria − for a long time thought to be mainly busy with photosynthesis − make up a considerable proportion of the deep-subsurface microbiota, this life on the dark side.