« The COVID-19 Virus by the Numbers | Main | Feel dehydrated? Dig for some water then! »

In his 14 years at SDSU, Roland studied HIV as well as RNA viruses that are transmitted by mosqui­toes—how they affect cells and their possible drug treatments. He was known for a remarkable de­dication to his students, refusing to step back from teaching even while severely weakened by advanced lung cancer and its treatment.

Roland died April 26, his 58th birthday, while hospitalized in the final stages of the disease. 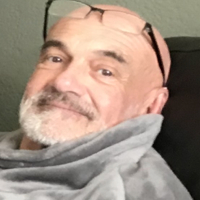 You can read more about Roland's life and research at these links: (SDSU Obituary, Viral Information Institute Obituary).

The evening started at the Smoking Goat, Roland's favo­rite eatery. After the meal and several bottles of wine we moved to the Bluefoot Bar and Lounge. After the obligate conversation about how it was a shame that the place had been converted from a leather bar to hipster hang-out, we took our drinks to a booth and proceeded to ar­gue about flow cytometers, viruses, and immunology. The entire time Roland's hands were explaining his talk­ing points faster than his mouth. And nothing would get his hands moving faster than bringing up the FACS faci­lity; he loved these machines and the work they could do. All you had to do was mention that microscopy was a better technique and you would be inun­dat­ed with reasons why flow cytometry was more elegant and generally superior. Roland could not help rising to the FACS-versus-microscopy bait and this time his diatribe left his semi-inebriated audience laughing so hard that glasses were spilled, and bouncers dropped by to see if we were "Okay"?

It was time to leave bar and we stumbled back to Roland's house. Before we could escape in cabs, there was the notorious Roland garden tour. Any party or visit to Roland's house somehow in­volved the garden. Roland loved his cacti and euphorbia even more than his flow cytometers. He had hundreds of these succulents and other flora. In the middle of the night, Roland told tales of his plants and their lives. There were plans for getting rid of one tree to make space for planters. And there was the passionfruit vine he saved from a mediocre life in a dark space, now thriving. He so earnestly loved talking about those plants that it was hard to exit and get some much-needed sleep.

Even more loved were the viruses. Not the "fake viruses like phage," but the real killers like HIV, Dengue, and Chikungunya. Roland was enamored with the elegance of their overlapping reading frames and polypeptides. And he knew that this elegance was also their weakness: cells did not need to process polypeptides. Roland wanted to kill these killers. Only now, with CoVID-19 sweep­ing through the world, can the younger people understand how terrifying AIDS was to Roland's generation. And being a gay man made it so much worse. He decided to fight HIV and other vi­ruses. He probed their biology and genomes to identify potential therapeutic targets that could be assayed with his beloved flow cytometers. One of the tragedies of his untimely death was the loss of a great virologist, who could have built the protease screen we so desperately need for SARS-CoV-2.

This exuberant scientist was surprisingly private. Most colleagues did not know he was a talented painter who loved to gamble. There were only brief glimpses of his love for Cameron. He was a bit of a Momma's Boy, the prima donna of the family of four brothers and a doting mother. Anyone who had ever seen Roland and his mother strolling through the SDSU campus, on one of her month-long visits to San Diego, could see immediately how close they were. Roland and his brothers are so alike in personality that it is often hard to tell them apart. It is hard to imagine the devastation of Roland's loss to this joyful family, a pain compounded by CoVID-imposed separation.

Roland's public life centered around his lab and teaching. He worked tirelessly at both, and his students loved him for it. He won teaching awards and the Wolkowicz labbies are a tight-knit group that loved their leader. Even while fighting cancer, he held his lab meetings regularly. Beyond his lab, his greatest legacy may be the thousands of undergraduates who prized his hand-waving, dramatic, and fun lectures on viruses and their cellular hosts.

This obituary was reprinted from Viralization.org, website of the Viral Information Institute.

Strode into a bistro, ordered his favorite dish paired

with wine or sake, and settled into the argument

about how beautiful viruses are, how elegant,

so fascinating they raise goose bumps

Whether he drew with charcoal on paper,

grapevines and succulents in his garden, or

fluorescent proteins inside cells—DNA simply another

material to sketch his vision of the sublime—

his life and work were saturated with color.

He led his flock of acolytes, hands fluttering, a teacher

preaching: the virus comes apart before its offspring

re-assemble and escape, you see? Cells lack this

of this beautiful quadrille—

But… Big C takes no prisoners. That simple

He marshaled his weapons, inhibitors, and the best

generals to be found; above all his hunger

to live a flame, a blade, a spear

to parry and beat back the tumor.

eating him from the inside,

liters of fluid draining his lifeline.

Squeezed thin enough to pass through the eye

of a needle, his weapons clattered

hollow, one by one.

His blazing passion kindled fires and

raised goose bumps in all of us. 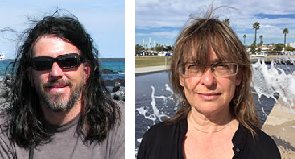 Forest Rowher and Anca Segall are Professors in the Department of Biology, San Diego State University.