On June 11th, we were addressed in a tweet by microbiologist Joe Harrison (@JoeHarrison1): "This seems like a timely topic for a blog or an article @ASMicrobiology @STCmicrobeblog. Mueller-Hin­ton agar is used globally and has standardized the study of #AMR. Before today, I'd never read the story of Jane Hinton @citeblackwomen" 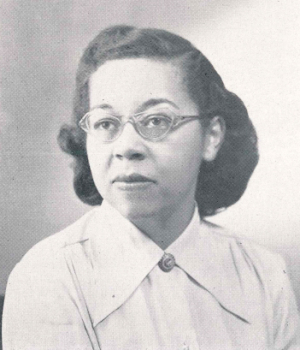 Yes, this request resonates with us. We are well aware that the diversity among us microbiologists is not as it could and should be − in contrast to the over­whelm­ing diversity among the microbes that we are so happy to consider (pun intended). Sometimes young stu­dents de­spair that in microbiology, and equally in mo­lecular bio­logy, not only important scientific achievements but also laboratory equipment, experimental techniques, and culture media are named after the researchers who in­troduced them. It is about showing that it was actually people who found or invented something, a matter of respect. Yet, it's usually the family names that stick, which makes the contribution of women nigh invisible in a male-dominated field (also in the perception of stu­dents). Whenever possible, we give the full names of the researchers whose work we feature. Michaelis-Menten kinetics? ...was jointly developed by Leonor Michaelis and Maud Menten. Kozak sequence? The concept was devel­oped by Marilyn Kozack. Etcetera.

So, today we celebrate Jane Hinton's contribution to microbiology, her work, together with J. Ho­ward Mueller, in the early 1940s on a reliable culture medium for Neisseria, which has proved use­ful also for other human pathogens, to this day. You may like to read more about the life and work of Dr. Jane Hinton, the first African-American woman to become a Doctor of Veterinary Medicine in the United States (1949). For us, the best way to celebrate an accomplished scientist is by repro­ducing her work in this blog (lightly annotated for a few today uncommon terms.)

A Protein-Free Medium for Primary Isolation of the Gonococcus and Meningococcus.

From the Department of Bacteriology* and Immunology, Harvard Medical School, and School of Public Health, and the Boston Dispensary, Boston, Mass.
*Aided by a grant from the Commonwealth Fund.

It is desired to report the development of a transparent, reproducible medium, containing no heat-labile material such as serum, which is sufficiently stable to withstand autoclave sterilization and storage, and which will support satisfactory primary growth of either meningococci or gono­cocci. The latter were used as the test organisms during the experimental work, since a constant source of primary cultures of the meningococcus is ordinarily not available. The similarity between the two organisms, and the reputedly greater difficulty expected in the cultivation of the gonococ­cus, indicated that a medium suitable for this organism should prove equally satisfactory for the meningococcus.

As a basis for comparison, the Difco "Proteose No. 3 Chocolate Agar" has been used. This me­di­um has been adopted as a standard in certain laboratories for the diagnosis of gonorrhoea1  and one of us (J.H.) was thoroughly familiar with its use.

The plan as formulated in beginning the experiments was essentially that followed with consi­derable success with other organisms, namely, to select the most suitable empirical medium avai­lable and attempt to break it down to its essential component parts. The experience of the senior author in 1918 with the Gordon and Hine2 pea meal extract agar for meningococcus carrier de­tection had shown that this medium, when carefully prepared, was eminently satisfactory. It pro­ved, upon trial, to be equally so for primary cultivation of the gonococcus, and it was therefore chosen as the starting point in the investigation. It consists essentially of a tryptic digest of meat, agar, and a 5% NaCl extract of pea flour, the latter presumably supplying some essential protein material.

The fractionation of the pea extract proved surprisingly simple, since it could be accomplished by mechanical means. The active portion proved to be, not protein, but starch. This might perhaps have been anticipated on the basis of Vedder's early work3. Substitution of ordinary laundry starch completely replaced the growth promoting effect of the pea extract. The effect is evidently due to the starch itself, rather than to some adherent impurity of small molecular size. This has been shown in two ways. First, it was found that a variety oi starches,-corn, potato, wheat, rice, ar­rowroot, etc. were weight for weight identical in their effect. Second, relatively brief hydrolysis of the starch with ptyalin (α-amylase) completely destroys the growth-promoting effect. This occurs even before the disappearance of the blue starch-iodine test, and indicates that so-called "soluble starches" are likely to prove unsatisfactory or irregular in their action. The explanation for the ef­fect of the starch is not yet clear. Possibly, as McLeod4 has suggested in connection with the ac­tion of ascitic fluid or serum, it acts as a "protective colloid" against the inhibitory effects of amino acids.

The tryptic digest of meat was next examined. This can be replaced by a rapidly prepared meat infusion together with a complete acid hydrolysate of casein prepared as described elsewhere by Mueller and Johnson5 and Mueller and Miller6. This hydrolysate is now obtainable from the Difco Laboratories, Inc., Detroit, Michigan, under their trade name of "Casamino Acids, Technical." Fur­ther examination of the essential components of the meat infusion is now under way. Since it is quite possible that this will prove to be a laborious matter, this report is being made with the hope that the medium in its present form may prove useful to others.

It has been tested in parallel with the Difco chocolate agar in a considerable series of primary cultivations of the gonococcus at the Boston Dispensary. The results have been highly satisfactory. Colonies are frequently larger on the starch medium than on the chocolate. They are easily recog­nizable, particularly with the aid of the oxidase reagent. There is no appreciably greater tendency for overgrowth of the plates by other organisms, and no significant discrepancies between posi­tives and negatives have been noted. We have recently been fortunate in being able to test the medium on a series of primary isolations of the meningococcus from both spinal fluid and naso-pharyngeal swabs of cases and carriers in Halifax, Nova Scotia. This was made possible through the courtesies of Dr. A. R. Morton, City Health Commissioner and Dr. D. J. MacKenzie, Director of the Frovincial Public Health Laboratory. Consistently good results were obtained in connection with this material, and a considerable number of cultures of a Type I meningococcus were readily secured. A correct appraisal of the value of this medium can result only from a more rigorous series of tests in the hands of other workers as well as our own. The details of the preparation follow.

While still hot, add the following solution which may be prepared while the agar is being autoclaved:

Mix and distribute at once either into test tubes (about 20 cc each for pours, 5 cc for slants,) or flasks of 120−200 cc. Autoclave not more than 10 minutes at 10 pounds. Over-autoclaving spoils the medium. The flasks can be used to pour plates at once. The tubes may be melted in boiling wa­ter and used as needed. The medium seems to give best results when not too moist, either with gonococcus or meningococcus. For either organism a candle jar (improvised anaerobic cham­ber) must be used, and the cultures incubated at about 36°C for 24 to 48 hours in the case of go­nococcus, or 16 to 24 hours for meningococcus.