« Feel dehydrated? Dig for some water then! | Main | Retrospective, January to June 2020 »

In a world buzzing with sensory input of all stripes and colors, a bacterium isn't one to miss out on any of the latest surrounding scoop. The sense of touch is not ignored. Mechanical feedback influences how a bacterium might move or stay in place, whether the bug in question is a piezo­phile at the bottom of the ocean or a pathogen on the surface of a target cell.

A recent paper by Sirisaengtaksin et al. delved into the pathway from mechanical stimulus to virulence in enterohemorrhagic E. coli O157:H7 (EHEC). EHEC causes diarrhea by forming attaching and effacing (A/E) lesions on gut epithelia, adhering to the cells atop an elevated pedestal of polymerized actin. This sticky trouble is due in large part to EHEC's "locus of entero­cyte effacement" (LEE). LEE is a pathogenicity island encoding a type III secretion system, which injects effector proteins into the host cell to facilitate attachment and cyto­skeleton-hijacking. Mechanically stimulated activation of LEE requires the master regulator Ler and its own global regulator, GrlA. 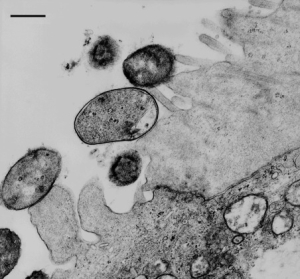 When EHEC is atop a hard surface, GrlA is mechanically stimulated and goes off to activate ler transcription. By generating mutant forms of GrlA, the investigators dis­covered how this mechanical sensing works. Prior to activation, GrlA is associated, through its basic C-term­inal residues, to acidic lipids in the membrane, for example cardiolipin. Docked at the membrane, GrlA is poised to sense and respond to mechanical stimuli.

Upon mechanical stimulation, GrlA relocates to the cytoplasm to activate ler. The authors showed that this happens by observing GFP-GrlA localization in three conditions ranging from low to high mechanical stress − planktonic EHEC, surface-attached EHEC, and surface-attached EHEC exposed to fluid flow. The membrane-sequestered GrlA in planktonic EHEC redistributed to the cytoplasm when the cells were surface-attached, and to an even higher degree when the cells were additionally exposed to fluid shear force (mimicking conditions in the GI tract). Thus, GrlA's ler-activation hinges upon a force-triggered migration between membrane and cytoplasm. This relocalization happens rapidly, ten minutes after mechanical stimulation, and induction of ler follows hot on its heels.

The authors also parsed apart the two inhibitory pathways of GrlA − membrane sequestration and the binding of repressor GrlR − and demonstrated that the two are independent. Eliminating either mode of inhibition caused significantly increased ler transcription, and the EHEC cells stuck to HeLa cells like glue. Wild-type EHEC could colonize zebrafish larvae like nobody's business, but EHEC without GrlA or GrlR or with mutated GrlA were less able. Altogether, this GrlA story suggests that for EHEC to colonize and persist within the tumult of a GI tract, it must finely tune into mechanical cues from its environment.