by Scott Chimileski and Roberto

Earth has a pulse. And at this time in human history, we can see it. Instead of a heartbeat, Earth's surface pulsates with the activity of trillions of organisms, each part of one, interconnected bio­sphere. Instead of beating about once per second, the biosphere beats around once a year. From 1997 to 2017, an array of satellites worked continuously to capture the images compiled in NASA's time-lapse animation, "Earth: Our Living Planet." Sped up millions of times faster than the pace of daily life, the animation reveals rhythmic cycles of phy­to­plankton in the oceans, plants on conti­nents, and the expansion and retraction of ice and snow.

(Click for animation)
Figure 1. A collective view of life on Earth from space. Source

As NASA was gathering the data for their epic time-lapse video, we traveled the globe to explore and photograph microbial ecosystems. Despite being tiny to the point of invisibility, microbes are the most ancient, abundant and diverse life forms. When we view the NASA animation, we envision in our mind's eye the microscopic activities hid­den deep within every pixel of the satellite images, in eve­ry drop of water, pinch of soil, and block of ice.

The colorful patterns in the oceans reveal the combined lifecycles of minute photosynthetic or­gan­isms, the phytoplankton. NASA can track microscopic phytoplankton cells from satellites when they proliferate and bloom by the trillions. The most in­tense blooms occur near shores where nu­trients from terrestrial ecosystems enter the ocean. Collectively, phytoplankton produce nearly half of the oxygen in the atmosphere. Thousands of animals, unseen in the animation, depend on these blooms for food. The animated blooms are a digital representation of the very living cycles that drive the marine food web. 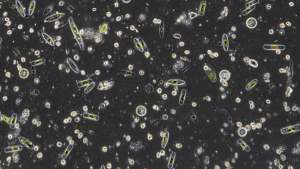 Meanwhile, forests, grasslands, scrublands and farm­lands oscillate across the continents. As they grow with the seasons, plants use the same core photosynthe­tic ability first evolved billions of years ago in the cyano­bac­teria, and later adopted by the ancestors of modern plant cells through symbiosis that resulted in the evolu­tion of chloroplasts. Many millions of trees and other plants were present in the darkest green areas of the NASA images.

We cannot see individual trees in the animation and we most certainly cannot see the microbial communities in the soils beneath the forest floors. But we know that bacte­ria and fungi produced the soils that plants are rooted in by slowly breaking down organic mate­rials. There are thousands of microbial species in every scoop of soil. Plant roots se­crete nutritious substances that attract soil microbes. Those microbes form a community around the root and in turn, nourish the plant. Like the ocean water, soil is rich with microbial life.

Microbes also impact the annual changes in snow and ice formations. Bacteria in the environment act as particles that initiate precipitation and promote the freezing of liquid water. Consequently, many snowflakes have bacteria at their centers. Other microbes construct communities on ice, dar­kening the surface and causing faster melting in the sunlight. 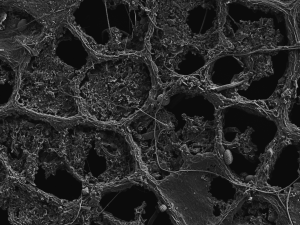 The pulse of the biosphere is Earth's vital sign. From our terrestrial perspective, Earth is a meshwork of diverse territories, from storied forests, to boundless savannahs and reefs. From a cosmic perspective, Earth's biosphere is a flutter of activity that fades with distance. There could be life on thousands of far-off planets. We could find alien microbi­al life under the icy shells of Jupiter's moon Europa or Sa­turn's moon Enceladus. Until then, as far as we know, it's just Earth that has this vital sign.

Life is at once fragile and persistent. Consider your pulse; it is the most durable beat you have ever known, a sign of your vitality that began inside of your mother's womb. And yet, this soft beat, separates life from death. The same is true for the biosphere. Earth's pulse was there long before humans were around to measure it, although, we now hold some influence over its future.

We doubt that humans could eradicate life from the planet, mostly because of how pervasive and vigorous microbes are. After all, a fraction of the biosphere is made up of microbes that persist in perpetual darkness deep below the surface. However, our societies certainly could alter the bio­sphere dramatically, such that it becomes inhospitable for us. Even a regional nuclear war could send enough soot into the atmosphere to temporarily block sunlight and disrupt much of the ozo­ne layer. The resulting UV radiation at the surface would decimate ecosystems, wild and agricul­tural, remodeling the food web and likely causing global famine.

We appreciate microbes for their foundational roles in kick starting and continuing to power Earth's living cycles. But bacteria will never build satellites. Microbes will never see the complete picture of life on Earth as humans have. Through humanity, the biosphere made a time-lapse video of itself. In that time-lapse, all of life, interconnected, appears in a single field of view. NASA produced an awe inspiring movie, worth sharing and playing over and over as we consider how this planet needs to be treated and hope to keep our home within the beating pulse of Earth. 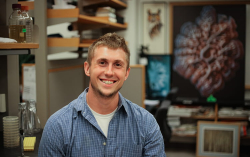 Scott Chimileski is a microbiologist and photographer who has contributed to STC in multiple ways and has worked with Roberto on many projects, including authoring the book "Life at the Edge of Sight."