Fucoidans, A Feast for Few

Fucoidans make life complicated for microbes. They are cell wall poly­saccharides that comprise 23% of dry brown algae's weight and resist microbial degradation longer than other algal poly­mers. Their sheer grab-bag variety is to blame: they all vary in mono­saccharide building blocks, some are branched and jazzed up with more mono­saccharides, and most are festooned with hy­droxy groups and sulfate moieties. To further bamboozle the hapless microbe, these structural variations differ between species of brown algae and even between seasons. So, to break down fucoidans and get at the carbon locked within, a microbe must possess an extensive toolbox of specialized enzymes: ones to clip off the heteroatom baubles, ones to debranch, others yet to break off more monomers. Enzymes aplenty.

Most microbes, understandably, pass up on fucoidans – no need to shunt precious energy into such a difficult proteome-demanding meal when simpler sources of carbon can be found. But a recent study by Sichert et al. discovered a bacterium that possesses the ability to en­zymat­ically degrade fucoidans from start to finish. Enter 'Lenti­monas' spp., brandishing hundreds of en­zymes.

Maybe unsurprisingly, they are members of the Verruco­­microbia phylum. The blog has prev­iously covered some of the oddities and wonders of these members of the no­torious Planctomycetes-Verrucomicrobia-Chlamydiae su­perphylum, from the wart-like outer membrane protrusions to a microtubule system with an ink­ling of euk­aryotic flavor. The latest chapter of the Verruco­microbial saga now features the ability to degrade fucoidans. Verruco­microbia already have built up a reputation for their poly­saccharide-degrading knack, from starches to hemi­cellulose to poly­acrylamide, but their ability to take apart a Gordian Knot of organic polymers is unseen in other bacteria. 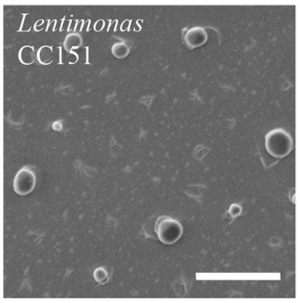 Figure 2. A scanning electron micrograph of a Len­timonas isolate from a different study, which highlights their irregular cell size. The scale bar represents 2 µm. Source

The researchers, through laborious rounds of sampling seawater, culturing, plating, and waiting for weeks for ti­ny colonies to emerge, isolated microbes that were able to grow on fucoidan minimal media. They identified the­se as seven strains of 'Lenti­monas', all of which possess a single chromosome and a single mega­plasmid. While the chromosome is home primarily to genes for general me­tabolic functions, the plasmid is responsible for the bulk of the fucoidan-degrading pathway. This fucoidanase en­zyme arsenal is stacked with 100 exo- and endo-acting glyco­side hydro­lases, 113 sulfat­ases, and 17 carbohy­drate ester­ases, plus 54 extra enzymes from the chromo­some, for a whopping grand total of 284 fucoidan­ases targeted to the stubborn poly­saccharide.

For all its formidable polymer-degrading capacity, it turns out that this enzyme bunch is very fussy about its target. The researchers found that 'Lentimonas' was only able to grow on fucoidans and carrageenan from brown and red algae, ignoring other commonly meta­bolized marine poly­saccharides. A picky eater, 'Lentimonas' occupies a very particular metabolic niche.

But how do these bacteria do it? To answer this question in molecular detail, the researchers se­lect­ed one strain of 'Lentimonas,' CC4, and exposed it to five different fucoidans. Ever the stub­born polymer, the fucoidans ranged in level of degradation, some more resistant than others. Of the mono­saccharides that resulted in this mix, only fucose was consistently taken up by the bac­teria. Picky eaters indeed.

When they ran the culture supernatant through an anion-exchange chroma­tography system, they found a lack of mid-sized pieces of fucoidan, suggesting that the bacteria's first step is not to break fucoidans into smaller intermediates but instead to use extra­cellular exo-acting enzymes to snip fucose monomers off of the ends. Once fucose has been cut free, the pathway that breaks it down further into the toxic intermediate lact­aldehyde is carried out inside the shielded safety of a highly expressed bacterial metabolic compartment. An organelle within a bacterium that has eu­karyote-like tubulin proteins – a coincidence?

(Click to enlarge)
Figure 3. The fucoidanases are specific for par­ticular fucoidans. a. The experimental set-up. b. The hydrolysis rate of released monomers, nor­malized to the maximum rate for each reaction substrate. Source

Proteomics and transcriptomics analyses supported the earlier predictions for the hundreds of enzymes, diff­er­entially up­regulated in the presence of fucoidans. Enzy­mes that selectively degrade fucoidans of specific algal species are grouped together into substrate-specific oper­ons to maximize efficiency. Indeed, efficiency must be a top priority for these 'Lenti­monas' to survive when they are surrounded by fast-growing competitors chow­ing down on much simpler poly­saccharides. Each type of fucoidan demands about a hundred 'Lentimonas' enzy­mes working en masse.

Taking a genomic peek into the enzymatic repertoire of other Verruco­microbia, the re­searchers found that other species also contained high numbers of members belonging to single enzyme families. Examples included the enzyme family specialized in degrading mucin, a structural poly­saccharide of human gut mucus; hemi­cellulose, abundant in plant cell walls; or porphyran, a ma­jor polysaccharide from Porphyra red algae. Verruco­microbia boast some of the niche specialists of the microscopic world, from gut-dwellers to beach­combers.

This story is yet another fascinating bacterial equivalent of "one person's trash is another per­son's treasure." Life finds a way, and microbes will play the cards they've been dealt. Especially Verruco­microbia.