Anosmia: the loss of the sense of smell. Until recently, I was clueless about anosmia. That changed March 22nd when my good friend Hera Vlamakis alerted me to a New York Times article describ­ing anosmia as a possible symptom of COVID-19. My self-evaluation routine changed henceforth to include a test of my capacity to smell. Now, during twice-daily walks with my dogs through the forest trails, I reach to the ground and scoop up some rich dark soil lying just beneath the leaf lit­ter. I bring it close to my nose and take a whiff. It's then and there that I know, anosmia I have not. My nose has yet to fail me for I immediately sense the delightful and unmistakable smell of earth! As many readers of this blog will know, that characteristic smell of earth is due to our ability to sense the microbial product geosmin (Figure 2). 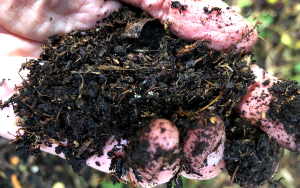 Figure 1. A handful of soil provides a whiff of the smell of earth (Source: Roberto Kolter)

When it comes to molecules that humans can detect through smell, geosmin occupies a special place. While on the forest trails, my dogs' world is a world largely guid­ed by their sense of smell. At all times their noses are hard at work, sniffing for new and exciting scents coming at them from every direction. Compared to them, my olfaction is rudimentary at best. But geosmin stands out because humans – in general – can detect it at re­markably low concentrations, as low as 1 ng/liter. That's one part per trillion! You'll be hard pressed to find many other molecules that the human nose can detect at such low concentrations. Long before I knew about anosmia, I was absolutely fascinated with our amaz­ing sensitivity to detect geosmin. For a species that has a relatively poor sense of smell, why do hu­mans retain such sensitivity for this microbial volatile? That question has brewed in my mind for decades. I have some ideas and I'll come to them later. First some more geosmin details, including some very exciting results regarding the selective advantage that geosmin confers on microbes that produce it. 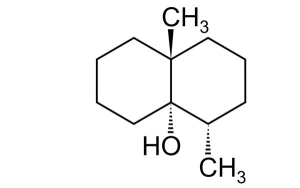 Humanity's fascination with the smell of earth goes back millennia. Witness the meaning of the ancient sanskrit wo­man's name Mritsha: "Sweet Smell of Earth when Wa­ter Falls on Earth." In the 19th century chemists took an interest in this aroma and in 1891 Berthelot and André extracted a compound from soil with the characteristic smell. They published their results in Comptes Rendus under the poetic title "Sur l'odeur propre de la terre." It would not be long before microbiologists, aided by the power of pure cultures, noticed that microbes – mainly actinomycetes – produced an earthy odor. But it was not until 1965 that Nancy Gerber and Hubert Lechevalier purified and characterized a compound having an earthy odor from cultures of nu­mer­ous actinomycetes. They named the compound geosmin, derived from the Greek roots geo (earth) and osme (smell). Gerber went on to determine geosmin's chemical structure in 1968. Thirty-five years later, in 2003, Gust et al. constructed the first mutants of Streptomyces coelicolor defective in geosmin production. Researchers had thus isolated the molecule responsible for the smell of earth and identified genes responsible for its synthesis. But the question remained, why do actinomycetes make geosmin? Now, a long-awaited1 paper provides an answer. 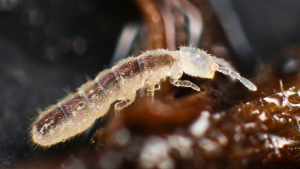 This remarkable paper, authored by Paul Becher and a stunning international team of collaborators with Klas Flärd as senior author, begins by addressing the question of whether within soil ecosystems, geosmin-producing streptomycetes might attract soil-dwelling arthropods. The investigators set traps containing colonies of S. coe­li­color in a forest site in Sweden and, after one day, went out to check who'd fallen in. Lo and behold, the traps pre­ferentially attracted springtails: ubiquitous and abun­dant soil arthropods. Other arthropods such as insects and arachnids were not enriched in the geosmin-producing traps. The authors focused the rest of their research on the model springtail Folsomia candida (Figure 3). To determine whether the springtail was indeed able to detect geosmin they developed a very clever assay. After growing S. coelicolor they took the volatiles from the culture and separated them using gas chromatography. They then separated the eluant in two. One half went to the detector and the other half was deliv­ered to the springtail's antennae, where its olfactory receptors are located. The results were dra­matic, the springtail's olfactory receptors showed activity precisely at the times when geosmin and the similarly earthy-smelling 2-methylisoborneol (2-MIB) eluted. Clearly, the springtails smell these molecules.

To begin to address the possible significance of these volatile compounds to the bacteria, the au­thors proceeded to analyze the regulation of transcription of the genes encoding the enzymes that synthesize geosmin (geoA) and MIB-2 (mibAB). They discovered that, surprisingly and in con­trast to the majority of genes involved in the synthesis of other specialized (or secondary) meta­bolites produced by streptomycetes, geoA and mibAB are transcribed during sporulation under the control of key sporulation regulators. These results prompted them to ask whether the Strep­tomyces spores, after attracting the springtails, might hitch a ride on the arthropod and thus ac­complish greater dispersal. Through beautiful electron microscopy they show spores attached to the springtails. Importantly, they showed that as a consequence of being carried by the springtails, the spores dispersed to greater distances. It thus appears that for streptomycetes there is a strong selective advantage associated to their ability to make geosmin. When times get tough and cells begin sporulating, they attract animals (at the very least springtails). By attaching to those animals, the spores are dispersed across greater distances, providing them with a greater chance of reproductive success. A beautiful paper all around.

I will now enter the realm of speculation by returning to the question I've been enthralled with for so long, why do humans retain such sensitivity for geosmin? My thoughts on this matter received a jolt nearly seven years ago – October 2013 at an EMBL meeting – as I listened to a talk by Klas Flärdh describing his studies Streptomyces coelicolor gene expression during sporulation. Klas reported that geoA, the gene involved in geosmin production, was under the control of sporula­tion-specific transcription factors. When I heard that I could barely restrain myself from jumping for joy. My mind went wild, the fact that geosmin was made as the organism began to sporulate had to mean that geosmin was an attractant for animals to come coat themselves in spores and carry them away, helping them disseminate. That was why humans retained such sensitivity to geosmin! Turns out, I was most certainly not the first to speculate on such possibilities. Relating my thoughts to my friend Gilles van Wezel he told me something like this: "Of course! You know, camels… Camels can smell geosmin 80 kilometers away, that's how they find water-filled oases in the desert. Once they reach the water and drink it, they are coated with spores and disseminate them." As I researched the trail of the camel vignette, I eventually found the story in print on a 2003 piece in The Guardian, containing an interview between journalist Paul Simons and Keith Chater, who had recently published the identification of the geosmin genes. Keith is quoted as saying: "Either they would eat or drink the spores, or they would get stuck on them and then get dispersed wherever the camel moves to." Quite interestingly, springtails appear in the 2003 text: "…it's not just camels that are attracted to the seductive perfume of geosmins, because earth­worms and springtails are also drawn to the bacterial spores." If camels, worms and springtails are attracted to the smell, why not humans? Of course we are! We love the smell of earth! Unfortu­nately, most literature on geosmin and humans is tainted by the concept that humans dislike to smell of geosmin in water. Perhaps that is a case of hormesis or "too much of a good thing can be bad." Are we like camels, just looking for water? I don't think so. After all, we don't seem to like to drink geosmin-tainted water. No, I offer a much more appealing reason for the symbiosis and thus for the selective advantage for humans to retain the ability to smell geosmin. By coming in contact with streptomycete-laden soil we disperse the spores. At the same time we coat our skin with dirt rich in antibiotic-producing bacteria that help keep infections at bay. Fewer infections, more chan­ces for reproductive success. So, when you get a chance, take a walk in the woods… barefoot!

1 I annotate "long-awaited" in a footnote because these comments do not reflect on the science but on the publication process. This paper was submitted to Nature Microbiology 29 May 2018 and was finally published nearly TWO YEARS later on 6 April 2020. Insane! No scientific results should ever have to await this long to be published. I imagine the authors' initial submission was sound. But almost certainly the editors/reviewers ap­plied the "tyranny of reviewer experiments." I do not care what lame arguments and/or excuses the editors and anonymous reviewers involved might have, all I have to say to them is: shame on you!