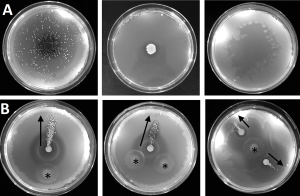 Figure 1. S. coelicolor (Sc) spores are trans­port­ed by B. subtilis (Bs). A When Sc and Bs are in­noculated on the center of a swarm plate, visi­ble Sc colonies (white dots) are apparent and are only dispersed in the presence of motile Bs. Left: Sc with Bs. Middle: Sc alone. Right: Bs alo­ne. B When Sc and Bs are innoculated in differ­ent positions on swarm plates, the Sc colonies are dispersed in the swarming direction of the Bs cells (black arrows). Asterisks denote the Bs innoculation sites. Source

Streptomycetes, these non-motile Actinobacteria that are capable of mycelial growth much like fungi, are quite in­ventive when it comes to the distribution of their spores. They don't just rely on enchanting scents like geosmin that they emit to attract springtails, which transport their spores over long distances (see Roberto's recent post). They also routinely employ bacterial transport workers with which they share their habitat in the soil, for exam­ple Bacillus subtilis. In a fresh preprint, Alise Muok, Den­nis Claessen and Ari­ane Briegel from Leiden University, The Netherlands, de­scribe how this "transport company" works. Spoiler: it works remarkably well since swarming B. subtilis cells, "swimming" in low-concentration agar on plates by flagellar movement, can drag Streptomyces coe­licolor spores over distances of ~10 cm (a limit given by the dia­meter of the Petri dishes used.)

Unintentional "distribution" of spores on a Petri dish with culture medium is a constant annoyance for every micro­biologist − who hasn't seen these suspi­cious spiralling "running tracks" of small insects on plates after a few days of incubation at room temperature? All kidding aside, Muok et al. took care to de­termine the direction in which dispersal of S. spores by co-inoculated B. subtilis occurred: always in the direction of movement of the swar­ming bacilli after passing the Streptomyces colony (Figure 1). 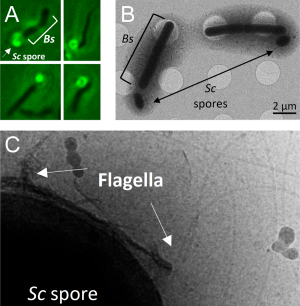 Figure 2. Microscopy methods indicate that Sc spores directly ad­here to Bs fla­gella. A Fluores­cence microscopy of dye-labeled spores with un­labeled Bs cells demonstrate that the spores localize to the cell poles of Bs. B Cryo-electron microscopy samples of mixed Sc spores and Bs cells reveal that the spores do not directly ad­he­re to the Bs cell body. C Cryo-EM shows the Bs flagella colocalize with the Sc spore coat. Source

How on earth can B. subtilis transport a Streptomyces spore that has approximately its own weight? B. subtilis' situation is largely comparable to that of a prison inmate who is prevented from running away by ball and chain-type shackles. If he takes the ball with his hands close to his body, he might succeed, right? And indeed, Muok et al. found by microscopy that the Streptomyces spores are preferentially found near the flagellated pole of B. subtilis cells (Fi­gure 2 A+B) and attached to flagella (Fi­gure 2 C). "Running away" for B. subtilis means propelling with its flagellum, and this may actually work quite well: Schuech et al. (2019) calculated that the efficiency of bac­terial swimming is largely independent of cell shape but requires that the center of mass is in an optimal distance to the rotational axis, the membrane-anchored flagellar motor, and depends on flagellum length in addition (see here a stunning simulation of a "bacterial race".)

How do Streptomyces spores "stick" to B. subtilis flagella? The spores possess, in addition to a tight-fitting coat, a proteinaceous onesie as outmost layer that is better de­scribed as a loose goretex poncho as it is easily disrupted during preparation of the spores for cryo-ET. This poncho, termed rodlet layer, is a fibrillar mesh­work of oligomerized rodlin and chaplin proteins (Figure 3). The hydrophobic rodlin proteins oli­go­merize to form the namegiving rodlets, while the chaplins are thought to link such rodlets to pairs. 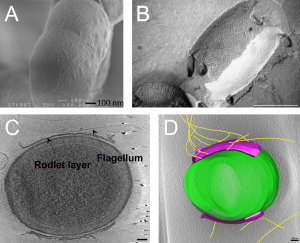 It is not known exactly how the rodlin oligomers "recog­nize" a B. subtilis flagellum but it is certainly not a highly specific protein-protein interaction. For one, Muok et al. found that the spores of other Streptomyces species, in­cluding S. tendae, S. griseus, and S. scabies, are similarly dragged across plates by B. subtilis in swarm assays de­spite their orthologous rodlin proteins being only ~35% similar but having much the same "slit width" of rodlet pairs of ~20 nm. Interestingly, spores of Streptomyces avermitilis that naturally lack rodlin are not transported by B. subtilis, comparable to those of a S. coelicolor ΔrdlAB mutant lacking rodlets. Second, Pseudomonas fluorescens transports Streptomyces spores via their flagella as efficiently as B. subtilis. And lastly, rodlin and chaplin homologs are not confined to bacteria but like­wise found in − better: on − spores of several Ascomy­cetes (Fungi). I can imagine, but not prove, that the mo­lecular interaction of the bacterial flagellum with the Streptomyces spore "poncho" is similar to protein velcro, that is, based on van der Waals forces (in short: 'hydro­phobic' mo­lecular interactions not involving ions or water) that are now known to be the reason why geckos can easily walk on smooth surfaces and upside down on ceilings.

While studying the report of Muok et al., the joy they must have had while performing swarming assays with S. coelicolor and B. subtilis resonated with me, and, no, this was not due to traces of geos­min (the preprint is Open Access.) You can sense this joy also in a STC post from 2011 by Elio, in which he describes experiments with swarming bacteria, Proteus, he had performed to­geth­er with his collaborator Dana Boyd, and where he also features the exciting work of Inghama et al. (2011), who had studied the transport of Aspergillus fumigatus (Ascomycetes) spores by Paeniba­cillus vortex, a motile Firmicutes bacterium like B. subtilis.

Christoph Weigel on July 16, 2020 at 01:16 AM in Methodology, Physiology & Genetics, Teachers Corner | Permalink