Professor Cheryl Okumura is in the faculty at Occidental College where she teaches an undergraduate course on Microbial Pathogenesis. Students in her class read some of our posts and are also asked to write pieces that mimic an STC post. Cheryl reached out to us last year and we posted two of her students' essays (see here and here). We love Cheryl's teaching approach and so we were delighted when she reached out to us again this year. Today's post is the second of two pieces selected from the course Cheryl taught Fall 2019. Kudos to you Cheryl for your passion and dedication to teaching microbiology! And many thanks for making STC part of your course. – The STC Team. 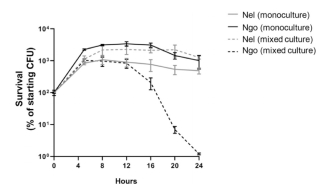 (Click to enlarge)
Figure 1. N. gonorrhoeae (Ngo) loses via­bility during prolonged co-culture with N. elongata (Nel). N. gonorrhoeae and N. elongata were monocultured starting at ~5x107 colony forming units (CFU), which is an estimate of the number of viable bac­teria in their sample, or together at ~5x107 CFU for each organism. Reprinted and modified from Kim et al. 2019. Frontis­piece: Gram-stain of gonococcal urethritis Source

Gonorrhea, a sexually transmitted disease caused by the bacterial species Neisseria gonorrhoeae, has emerged as a significant global public health issue with an estimated 78 million people infected annually (1). Untreated gonorrhea can lead to serious health complications including infertility, increased susceptibility to infection with the human immunodeficiency virus (HIV), and long-term abdominal pain (1). Notably, N. gonorrhoeae has developed multi-drug resistance, rendering most current treatment options ineffective (2). Thus, as we enter an era of untreatable gonorrhea, there is a pressing need to develop innovative approaches not only to treat gonorrhea but to prevent infection in the first place.

Although several current research endeavors developing preventative measures focus on vaccines for N. gonorrhoeae, few have examined how resident bacteria of the human body can combat its colonization (3). The human body is home to a wide array of microorganisms, many of which are essential for our daily functions (4). For instance, the human mucous membranes, which include tissues of the nasopharynx, endocervix, and rectum host non-pathogenic Neisseria. Such commensal Neisseria, which are in the same genus as N. gonorrhoeae, play a critical role in providing nutrients, regulating the homeostasis of our metabolic processes, and preventing colonization of various pathogens (5, 6). Because N. gonorrhoeae inhabits the same environments and niches as commensal Neisseria species, the human mucosa is also a site of gonococcal infection. Whether commensal Neisseria act antagonistically towards a pathogen of their own genus to achieve sole occupancy of the niche has remained unclear. A deeper understanding of potential antagonistic interactions between commensal and pathogenic Neisseria strains could help guide us to groundbreaking, microbe-based treatments for gonorrhea. 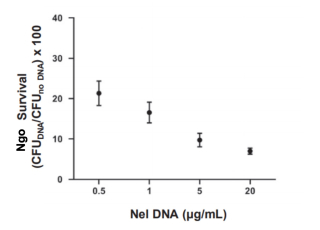 In a recent paper, Kim et al. explored whether commensal Neisseria could kill their pathogenic relative N. gonorrhoeae (7). First, to determine the in vitro relationship between the commensal Neisseria elongata and the pathogenic N. gonorrhoeae, the authors cultured each strain separately and then together and measured their survival. When cultured together, N. gonorrhoeae survival was significantly reduced after 16 hours while N. elongata survival was unaffected (Figure 1). These findings were further confirmed in a mouse model of infection. Here, prior inoculation of N. elongata decreased the ability of the pathogen to colonize the lower genital tract. These results led the authors to hypothesize that commensal N. elongata must directly act to kill N. gonorrhoeae.

Interestingly, most Neisseria species are naturally competent, meaning they can spontaneously take up DNA from their environment (5). This involves cellular machinery including the pilin-like protein ComP and the associated retraction motor PilT. When a mutant strain of N. gonorrhoeae lacking ComP or PilT was incubated with N. elongata, no clearance of N. gonorrhoeae was noted, suggesting DNA uptake by the pathogen is necessary to kill it. Further tests found that N. elongata DNA toxicity was due to a difference in DNA methylation patterns of the two Neisseriae. DNA from N. gonorrhoeae, which encodes 10 DNA methyltransferases, was heavily methylated as compared to N. elongata DNA, which by contrast encodes 3 DNA methyltransferases. When N. elongata DNA was modified to have a similar DNA methylation pattern to N. gonorrhoeae, toxicity was no longer associated with N. elongata DNA. The methylation pattern of DNA may therefore have a key role in promoting the clearance of N. gonorrhoeae. The authors posited the molecular killing mechanism most likely involves recombination events between the alternatively methylated commensal and pathogen DNA, which leads to the pathogen cleaving its own DNA and eventually to cell death. Thus, N. gonorrhoeae's Achilles heel may lie in its natural uptake of DNA with different methylation patterns from the environment, which may subsequently result in DNA recombination events that alter chromosome integrity.

Commensal bacteria can inhibit the colonization of pathogens through toxin-based mechanisms, but this exciting discovery of a commensal's strategy for combating N. gonorrhoeae may open the door for the development of a non-traditional, DNA-based method for treating gonorrhea infections. Identification of DNA as the specific killing factor provides the ability to combat the pathogenic species without introducing a bacterial species that may act as an opportunistic pathogen. Importantly, this study provides a new potential strategy for treating the growing peril of gonorrhea infections as an alternative to antibiotics, especially at a time when N. gonorrhoeae has developed resistance to almost all antibiotics. 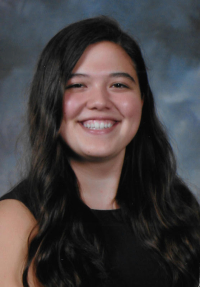 Camille graduated from Occidental College in 2020 with a degree in Biology. Her Fall 2019 Microbial Pathogenesis course with Professor Okumura was one of her favorite classes at Occidental. She hopes to continue to delve into the world of microbiology research in the future as a physician-scientist.