« TWiM 221: Weapon of mucus destruction, WMD | Main | Protect Your Genes and Express Yourself » 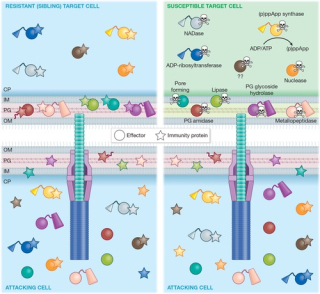 Just like people, microbes communicate with their relatives either positively or negatively, helping each other out or inflicting damage in the process. Among the more sophisticated ways whereby one species dominates another is the Type VI secretion system (T6SS), a nanomachine used by many Gram-negative bacteria to deliver noxious proteins into the cells of another, including eukaryotes. It is not the end of the line: about 10 such systems are known and the numbers are growing.

The toxic proteins delivered by T6SS, known as effectors, have a variety of activities, including disrupting the recipient cell's membrane or cell wall, targeting their nucleic acids and other essential components. T6SS also deliver anti-eukaryotic effectors that disrupt the actin cytoskeleton, promote cell invasion and colonization, and, for example, protect the cholera bacillus from predation by slime molds and fungi.

The T6SS machinery used for delivering the effectors is beautifully intricate, consisting of a contractile apparatus made up of a tube that sticks out of the cell along with supporting structures. Together, they can pierce the surface of the recipient cell and deliver the effectors.

A recent review by Hernandes, Gallegos-Monterrosa, and Coulthurst elegantly discusses these points. In their words: "The T6SS is a highly versatile weapon for bacterial competitiveness, with mounting evidence that T6SSs play key roles in shaping the composition and dynamics of diverse microbial communities, including microbiota... T6SS‐mediated competition may also represent a key driver for bacterial evolution, with ongoing acquisition and diversification of new effector and immunity genes resulting in inter‐species and inter‐strain 'arms races.'"

Particularly exciting is an interview with the senior author, Sarah Coulthurst. Besides explaining her insights into the arcana of T6SS, she makes an extraneous point that is especially dear to my heart: "I think that a really exciting and growing area in bacteriology is understanding the evolutionary influence of phages and phage-resistance mechanisms and the role they both play in determining population structures." Amen.