Protect Your Genes and Express Yourself

For any complex process to run efficiently, compartmentalization is essential. In my kitchen, results would be inedible if I did not have the information (recipes in my laptop) separate from the reactions (bowls, oven, etc.) and the cleaning (sink) and, importantly, ways to move the process of cooking from compartment to compartment. It's no different for cells, compartments organize the process of life itself. The most obvious form of compartmentalization is, of course, to generate separation through the permeability barrier afforded by lipid bilayers. In eukaryotic cells this is quite apparent in the numerous membrane-bound organelles, the endoplasmic reticulum, the mitochondria and, of course, the nucleus, to mention but a few. In contrast, in most bacteria and archaea such membrane-bound organelles are conspicuously absent. There are some exceptions, for example the magnetosomes. But by and large these microbes are characterized by a lack of membrane-bound organelles. How do bacteria and archaea organize their intracellular space to carry out the complex processes required to sustain life? For one possible answer, we need to look at eukaryotic cells again. 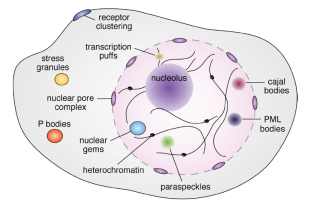 Fig. 1. Liquid-liquid phase separation un­der­pins the biogenesis of a wide array of membraneless organelles within a cell. De­picted here is a non-exhaustive list of these organelles. Source. Frontispiece: crop­ped from Figure 3

Decades (if not centuries) of microscopic analyses revealed that eukaryotic cells contain numerous membraneless organelles. Among these are stress granules, P bodies, Cajal bodies and, perhaps most notably, the nucleolus – the site of ribosome biogenesis. What keeps these organelles discretely separated from their surroundings, if not a membrane? Surprisingly, the answer to this question emerged relatively recently in the field of cell biology. These membraneless organelles are liquid droplets that form through a process known as liquid-liquid phase separation (Figure 1). One way to think about the process is the "salad dressing analogy," where after vigorous shaking the oil and water still separate to a demixed two-phase system. But for the membraneless organelles, the phase separation happens due to the high concentrations of protein and nucleic acids inside the cells. These supersaturated solutions of polymers spontaneously separate into two phases, a concentrated phase and a dilute phase, that stably coexist. But the concentrated phase remains as a liquid. Thus, there is no physical barrier that keeps the compartment separated; the movement of other solutes in and out of the compartment can still be driven by diffusion. For in-depth treatments of recent advances in the field of membraneless organelles in eukaryotic cells, I recommend these two reviews: one from a physicochemical perspective while the other one has a bit more of a cell biology bend to it. While many such organelles are known and intensively studied in eukaryotic cells, there are still no hard-proven examples of them in bacteria and archaea. But I believe that is just a matter of time because there are several very strong candidates. A leading candidate: the Dps-DNA complexes that form in starved bacteria.

Fig. 2. Electron microscopic analysis of Dps and Dps-DNA complexes. A and B are at the same magnification; the inset in A is magnified 2.5x more. (A) Dps alone, (B) Dps-DNA complex; inset in A represents a higher magnification of Dps alone, show­ing the hexameric ring-like structure and the double-layered structure of a ring lying sideways. Source

Dps is a DNA-binding protein abundantly expressed in starved cells. While it was originally discovered in Escherichia coli, genes encoding Dps homologs are found in thousands of bacterial and archaeal genomes. A bit of Dps history – which I should know since Dps was discovered in my lab some thirty years ago in work led by then graduate student Marta Almirón – serves well as background for describing more current work. We were doing reverse genetics, isolating highly expressed proteins from stationary phase cells and, from their sequence, arriving at the gene. (Mind you, this was way before the first sequencing of a complete bacterial genome…) Having the genes for these proteins at hand allowed us to both overexpress the protein and generate mutants lacking the protein. Studies on one such candidate led us to a DNA-binding protein whose loss (via mutation) led to starved cells that lacked the characteristic starvation-induced resistance to hydrogen peroxide. We named the protein Dps (DNA-binding protein from starved cells) and its corresponding gene dps. One of the most striking results accompanying the initial discovery was the observation that large complexes formed when Dps and DNA were mixed in vitro (Figure 2). Alone, Dps was observed as discrete "rings" in the electron microscope. But when mixed with DNA, we observed enormous honeycombed complexes. Subsequent collaborations with the laboratories of Jim Hogle and Avi Minsky led to two important insights into the biology of Dps. First, the crystal structure of Dps showed that it was a ferritin homolog. Dps is actually a "miniferritin," a spherical dodecamer with a disordered and positively charged N-terminus that serves to bind DNA. Based on the structure, a model emerged – subsequently proven right by others – whereby iron and damaging oxygen species are detoxified inside the Dps sphere through a ferroxidase activity and DNA binds to the outside. Second, Dps-DNA complexes formed crystal structures visualized using electron microscopy of stationary phase cells. We hypothesized that DNA protection could be due, in part, to biocrystallization. One consequence of such crystal formation was that it was difficult to imagine that the genes in the Dps-DNA complexes could be expressed. Fig. 3. Dps Compacts the Nucleoid in Sta­tionary-Phase E. coli (A) Schematic of the structure of DNA in a wild-type cell during stationary phase. Dps condenses the cell­ular DNA. (B) In Δdps cells, Dps-mediated DNA compaction cannot occur. (C and D) Fluorescence images of the nuc­leoid from wild-type and Δdps cells stained with Hoechst 33258 (cyan) were super­imposed onto phase-contrast images of the same cells (black on red) grown for (C) 24 or (D) 96 hr. (E) Ratios of nucleoid length to cell length, extracted from fluor­escence im­ages (n=133–208 cells per con­di­tion). The error bars represent the esti­mate of the SEs by boot­strapping. Source

Fast forward twenty years, past hundreds of outstanding papers by dozens of groups worldwide, and we come to what I consider a major Weltanschauung change regarding how Dps works. A 2018 paper lead by Anne Meyer, now at University of Rochester, studied the global effects of Dps on the E. coli chromosome (Figure 3). Based on prior work, there was every reason to believe that the overall size of the nucleoid would be affected. By careful measurements of cell and nucleoid length of the wild type and a Δdps mutant, the authors conclusively showed that Dps compacts the nucleoid in stationary-phase E. coli. So far, so good.

A protein that compacts the nucleoid would be expected to down-regulate transcription. Two-dimensional gel electrophoresis (the crude "proteomics" of last century) and the Dps-DNA crystals observed in starved cells predicted that transcription should be altered by the binding of Dps to DNA. To determine if there were any transcription differences between wild-type and Δdps strains in stationary phase, the authors relied on RNA-seq (a method to look at transcription globally). When they compared to levels of mRNA in the two strains, the results were not at all what they expected (Figure 4). In fact, there were almost NO differences in the transcription patterns between the two strains! This was such an unexpected result that the authors went to great extents to analyze the details of the transcription process in vitro in the presence and absence of Dps. Looking at initiation of transcription from different promoters and at the fine details of transcription elongation they came to the same conclusion. Dps did not measurably affect transcription by RNA polymerase. Quite interestingly, they showed that DNA bound by Dps was accessible to some proteins besides RNA polymerase, namely the LexA repressor, but inaccessible to DNA cleaving enzymes, namely restrictions endonucleases. 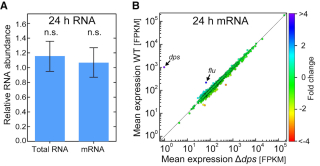 Fig. 4. Dps has no influence on the tran­scriptome in stationary-phase E. coli cells (A) The relative amounts of total RNA and mRNA (mean ± SE). (B) Differential ex­pression analysis of RNA sequencing. For each gene, the mean expression in the wild-type strain is plotted against the cor­responding value in the Δdps strain. Colors represent the fold difference be­tween the two strains. Source

How do the authors reconcile the apparent crystalline nature of the Dps-DNA complexes with the complexes' ability to selectively allow/exclude access to DNA by other proteins? To them, "the ability of Dps to selectively exclude access to nucleic acids is reminiscent of liquid-liquid phase-separated domains in eukaryotes." And they introduce the idea of a "liquid crystal" to describe the Dps-DNA complexes: "Dps has been observed to form ordered crystalline arrays. Superficially, crystalline DNA complexes may seem incompatible with the need for RNAP holoenzyme to diffuse to its promoter, but lattice diffusion occurs in many solid systems via crystal vacancies (e.g., a substitutional alloy formed between two metals). Furthermore, our single-molecule experiments demonstrate that Dps complexes can rapidly rearrange. This dynamic behavior indicates that Dps complexes may retain some features of a fluid. We therefore propose that, rather than forming static crystalline structures, Dps forms dynamic complexes with similar diffusive properties to liquid-liquid phase separated organelles such as the nucleolus. While RNAP can freely enter these organelles from the cytoplasm, other proteins (such as the restriction endonucleases used) cannot cross this barrier. The differential solubility of various macromolecules in Dps complexes provides a simple mechanism for Dps to protect DNA while allowing transcription to continue." So you see, that's how E. coli (and likely many many other bacteria and also archaea) can protect their genes and express them at the same time. My sense is that these discoveries are but the very beginning of a plethora of studies to come, focused on discovering and understanding membraneless organelles in bacteria and archaea.